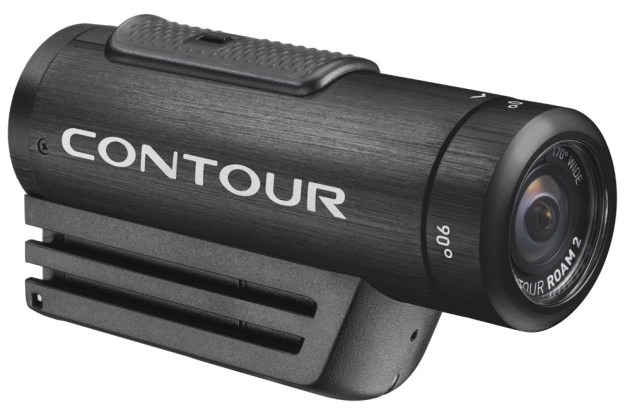 “For basic POV filming the ROAM2 passes the test, although there isn’t any standout feature to set it apart from the rapidly expanding choices for compact, mountable video cameras.”

When you’re about to take off on that downhill on your snowboard or mountain bike, the last thing you would want to fool around with is the POV cam that’s attached. Contour’s Roam2 is designed to be dead easy to operate – just aim and shoot. The camera takes care of recording high-definition video while you concentrate on avoiding the obstacles in your path. However, is this simple design alone enough to justify the cost, when there are other camcorders that offer a lot more features?

The Contour Roam2 ($200) is what we would describe as a basic POV camera. Take it out of the box, mount it to your helmet/bike/kayak/airplane/motorcycle/jetpack, and start filming. Although only two mounts are included with the camera, they should provide you with a variety of options for angles, especially when you take advantage of the rotating lens assembly, which is one of the highlights of the camera. The rotating lens allows you to properly align the image frame no matter how convoluted or crooked your mounting job is and the built-in laser level is simple to use and does a good job confirming that your frame is horizontal and straight (although you may have to flip the video in post-editing since there is no indication of the frame’s vertical orientation). The casing is waterproof, too, so you can take it into the snow or water (although a waterproof case is available for extra protection).

The barebones nature of the camera makes for mistake-free shooting: slide the locking on/off switch forward and you’re recording, slide it back and you’re back to standby mode. A beep indicates that you’re recording and two beeps let you know that the camera has stopped. There’s no LCD, hence, one issue that arises is the camera settings cannot be changed without connecting the camera to your computer (and using the downloadable Contour Storyteller application). Although the basic settings are fine for most uses, it was not great to know that you could not stop and take a still picture without going home and updating the settings, or that once the still image mode was engaged you could not shoot video. The photo mode is also only available in continuous shooting, taking a single picture at set intervals between one photo per second and one photo every 60 seconds – our advice is to stick with the video mode.

While simplicity may be the Roam2’s end goal, this pared down version lacks some of the user controls of Contour’s +2 model ($400), which is a similar camera in look, feel, and operation, but offers the bonus features of GPS to add geotagging, external inputs for mic and HDMI, and Bluetooth for wireless operation and setup via an iPhone or Android device (a nice plus since it compensates for the lack of an LCD).

To test the ROAM2 we took it out on a road bike ride in the mountains above Boulder, Colorado. We didn’t want to immediately apply the camera mount until we were satisfied with the positioning, stopping several times to shift the angle. The ROAM2, however, performed well in each of the positions we used. It would be nice to adjust the settings on the fly, but its automatic exposure and white balance settings performed well in the challenging lighting of late-day strong sun and diffused light in the trees on the climb. On the descent, clouds had begun to build and the camera held decent contrast and image quality in the flat, dying light.

The resolution of both video and still photos is sufficient for online use, especially with the most basic of post-processing in Adobe Lightroom (or your chosen video or photo editor). Because there isn’t any in-camera noise reduction, images do require some software-based finessing; unfortunately the Storyteller application is only a file manager – it does not have any editing capabilities. The look of the photos straight out of the ROAM2, however, falls short of an iPhone or the most basic of point-and-shoot cameras. The videos appear to have more in-camera processing applied, so they are sufficient for sharing online or over e-mail; we viewed the videos on a 27-inch display and quality was generally good, although you’ll notice the artifacts in full-screen mode.

Although the camera is a little bigger than the basic settings would seem to require, the solid build quality was reassuring when we had it taped to various parts of the bike frame. The rotating lens (270 degrees available) means that as long as you can mount it in front-to-back alignment with your intended framing, you can spin the lens, activate the laser leveling, and know with confidence that the frame will be flat. The wide-angle lens and 1920 x 1080 resolution mean that your frame will capture all you want to see without too much distortion and that you can crop in to isolate a tighter framing if so desired.

The included 4GB microSD card is a decent starter, capturing about 30 minutes of footage at the highest resolution or just less than that in the Action HD mode (60 frames per second at lower resolution to allow for slow motion playback). If you’re going on longer adventures, definitely grab a higher capacity card before launching yourself up or down the mountain. A small colored indicator light keeps you in the know about remaining memory and battery life. The ROAM2 features a built-in battery that is stated to last more than three hours while recording. Obviously, with the included small memory card that is more than sufficient. Over a week of use, we only charged the camera while downloading clips or changing the settings, but we never reached the red zone on the indicator.

For basic POV filming the ROAM2 passes the test, although, outside of the rotating lens, there isn’t any standout feature to set it apart from the rapidly expanding choices for compact, mountable video cameras. Definitely check out the available mounting options to find the correct mount or one that allows for multiple placements. If you are looking to buy a camera and immediately get your adrenaline pumping without reading a manual or mucking around with a bunch of settings, the ROAM2 is basically ready to go straight out of the box, but don’t expect other options beyond that.

Logitech’s new webcams are an alternative to Apple Desk View
2024 Chevrolet Equinox EV aims for affordability with $30,000 base price
Chrome just added a great new way to protect your passwords
HP unveils new IPS Black monitor with one key new feature
We really didn’t expect these two new contraptions from LG
There’s a problem with those amazing Ryzen 7000 benchmarks
Halo Infinite Season 3 delayed until 2023, split-screen co-op canceled
Apple’s antivirus strategy for Mac has gone fully preemptive, but is that enough?
Intel admits to one key regret about its launch of Arc GPUs
Here’s why you need to update your Google Chrome right now
Malware has a terrible new way to get to your computer
Jeep is launching its first two electric SUVs in the U.S. in 2024
3 upcoming gaming monitors worth getting excited about