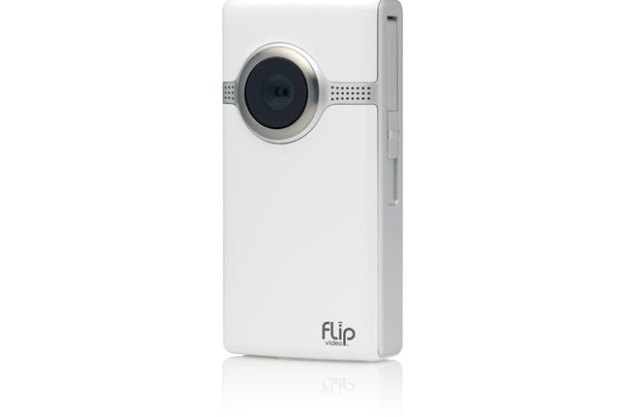 As with all pocket camcorders, Flip video quality suffers when compared to full-sized models, a result mostly of lower-cost image processing chips, cheap lenses and footage that shakes like a bridegroom hearing the wedding march – the result of ineffective image stabilization. Flip has tried to address both the quality and jitter problems with its latest UltraHD, the UltraHD 3, but has both succeeded and failed in improving the world’s bestselling camcorder.

Basically, all the UltraHD 3 does is shoot 1280 x 720p video at 60 fps (the 1-hour version captures video at 30 fps like the UltraHD 2), with footage stored internally. There are no picture-taking capabilities, no special effects, no SD card expansion. Literally, just point, shoot, then flip out the USB jack (hence its name) to transfer the footage using the embedded FlipShare software.

Other than being around 25 percent thinner, the new UltraHD 3 is nearly identical to the old. The biggest difference is the shiny plastic sides. All the buttons and controls are in the same place with the exception of the HDMI jack, changed and moved from a full-sized jack on the left perimeter to a micro HDMI jack on the base, adjacent to the new 16-pin FlipPort, a proprietary accessory jack designed to support licensed “Designed for Flip” accessories such as an external mic. The first is Blue Microphones’ Mikey for Flip, an attachable mic array with an additional mic input jack for a wired or wireless interview mic, priced at $69 and available sometime early next year. Other accessories will include video off-loaders, extra battery packs, and whatever else third parties cook up.

The UltraHD 3 takes a giant step forward in flexibility – it can run on either 3 AAAs (instead of UltraHD 2’s 2 AA) or an included lithium-ion rechargeable pack. Flip says you’ll get two hours of shooting on the alkaline, and 1.5 hours on the rechargeable.

Flip’s new models remain as cheap as the old versions – the UltraHD 1 hour (which runs only on two AAs) is $149, the two-hour UltraHD 3 reviewed here costs $199.

Like all Flips, the UltraHD has a four-way toggle just below the 2-inch LCD: up-down controls zoom in record mode and adjust volume in play mode, left and right skips through clips, with a big red record button in the middle. There’s a play button on the left, and a trash button on the right. The power button is on the right perimeter, the flip-out USB jack on the left.

Along with pending third-party FlipPort accessories, underwater cases and a variety of tripods and mounts, there’ll also be a wide-angle lens from Bower ($50) that attaches magnetically.

The FlipShare software now supports upload to Twitter and automatically adapts its download and playback to your PC’s video processor.

All pocket camcorder video suffers from jitter and jerkiness; it’s the nature of the beast. Electronic and digital image stabilization schemes often add grain or interpolation artifacts, and even more unnatural jitter as it tries to compensate for your unsteady hand.

Flip has come up with a chip-based gyroscope system similar to the gyro now found in superphones, to better isolate the image capture circuitry. Combined with its 60 fps frame rate, Flip video is substantially steadier and thankfully smoother, with none of the constantm nausea-inducing tics.

But while the UltraHD 3 improves jitter control, it takes a step backward in color and contrast. UltraHD 3 videos have a blue-ish tinge compared to footage from the UltraHD 2, and it doesn’t compensate for light and shadow as well as the UltraHD 2. UltraHD 2 footage from Grand Central Station, for instance, retains the actual color of the marble better than the 3. In the squirrel video, the second-gen model adjusts from shadow to sunlight far more effectively. In the deli scene, the countermen’s red shirts are far redder in the UltraHD 2 footage compared to the new model.

Smooth, balanced footage without tics and jerks trumps slightly-off color every time, and both the accessories and dual battery capabilities make the UltraHD 3 a far more flexible model than any in Flip’s line. But there are other pocketcams that capture higher-resolution video, megapixel stills, and endowed with more capabilities – if not the improved image stabilization or stupid-simple operation – at a similar price.

New VESA display standard makes it easier to pick a monitor
Android 13 is here, and you can download it on your Pixel phone right now
Meta wants you to use its creepy Portal as a secondary monitor
Dell could be working on the same charging tech Apple has been developing
We really didn’t expect these two new contraptions from LG
There’s a problem with those amazing Ryzen 7000 benchmarks
Halo Infinite Season 3 delayed until 2023, split-screen co-op canceled
Apple’s antivirus strategy for Mac has gone fully preemptive, but is that enough?
Intel admits to one key regret about its launch of Arc GPUs
Here’s why you need to update your Google Chrome right now
Malware has a terrible new way to get to your computer
Jeep is launching its first two electric SUVs in the U.S. in 2024
3 upcoming gaming monitors worth getting excited about