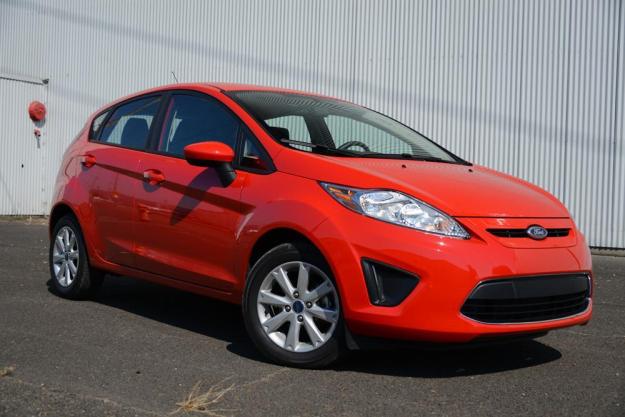 “As a subcompact car, the 2012 Fiesta knows how to party… it’s just not the perfect party and many won’t mind not being invited.”

Economy cars have been on cruise control for quite some time now. Traditionally, this hasn’t been the segment for frills or fun, and nine times out of 10 performance has taken a back seat to practicality. Until recently, this was the case with American cars and is one of the major reasons manufacturers like Toyota and Honda managed to garner such a large foothold of the market with cars like the Civic and Corolla in the 1980s and 1990s. But the times they are a changin’, and manufactures that have historically struggled in this space (namely Chevrolet and Ford) want a piece of the practical-car pie.

Enter the fun-loving 2012 Ford Fiesta. Now in its sophomore year, and after a 31 year absence, Ford’s Fiesta made its return to North American shores in 2011. Truthfully, it couldn’t have come a better time. With gas prices continuously in flux and American buyers looking to jump into more fuel efficient and economical cars, the compact and subcompact segment has really started to flourish – and not just with cheaper choices that will appeal to your wallet, but ones people actually wanted to drive.

Does the 2012 Fiesta manage to deliver a vehicle that neatly manages to be both fun and frugal? It’s sure looks that way.

Let’s get this out of the way right now: The 2012 Ford Fiesta is one hot little hatch. There, we said it. Not only does it exhibit more than a hint of European styling appeal, but it’s not restricted to the old world any longer, with Ford finally bringing the popular car to North American shores. Indeed, one of the great things about modern subcompact cars is their ability to be just as easy on your eyes as they are on your wallet, and the Fiesta is no different.

At its face, the Fiesta sports a confident front fascia along with sharpened headlamps and sculpted wheel arches. Ford’s signature gaping maw found on many of its newer models makes an appearance too – albeit in smaller form. At the side, the Fiesta looks sleek, almost elegant. The arching roofline tapers out towards the rear where it is met by the Fiesta’s climbing taillights and dipping hatch.

Of course, if words were flowers manufacturer’s tendency to describe their cars with such language could plant a garden in your ears. Most of the time it’s overblown PR hype, while other times it actually rings true. Design-wise the Fiesta falls into the latter category: It isn’t eccentric, loud, or obnoxious; it’s just a good-looking car that you won’t be embarrassed to be seen in. And really, how many econo-boxes can you truthfully you say that about?

While the 2012 Fiesta is available in both four-door sedan and five-door hatchback varieties, we wholeheartedly feel that the hatchback represents not only the more practical choice, but the more stylish as well. Still, hatchbacks have routinely proven unpopular in the North American market.

Sadly, the party doesn’t continue to the Fiesta’s interior. Here it seems Ford was more focused on creating an edgy and vibrant cabin with little regard to the practicality of everyday driving. While we can’t complain about material quality employed inside (we liked the fun and sleek metallic brushwork throughout), we’re not so thrilled with the placement of the Fiesta’s steering wheel and console controls. Rather than go for a simpler, more effective scheme, the console’s “butterfly” layout and rigid knobs are a chore at best, and much too distracting at worst. We also took umbrage with the lack of volume control on the steering wheel button set. Ironically, this is where Ford decided to keep the button layout simple and limited to two clusters on each spoke.

For its part though, the Fiesta’s interior is welcoming enough. It might not be the most comfortable, or even the roomiest, but we never truly felt like we were riding in an economy car. The layout might be questionable, but to Ford’s credit they have designed a rather upbeat cabin. Perhaps that party moniker is appropriate after all.

Still, if you favor function over form you’d do well to consider your alternatives. Other cars in the segment afford you more carrying capacity and better rear-seat real-estate — the Nissan Versa, Kia Soul, and Honda Fit all spring to mind. Throw (or lovingly place) the kids in the back seats and you should be fine though, but don’t be surprised if full-sized adults stage a road-side coup after prolonged trips.

Travelin’ techies will be happy to learn that the Fiesta sports a rather robust amount of cabin tech for a vehicle of its stature. Our SE review model, which sits between the bare-bones S Hatch and top-of-the-line SES trim, came equipped with cruise control, upgraded 80-watt six-speaker sound system, and a CD player with USB audio input and small monochrome LCD display atop the dash’s summit. Rather conveniently, Ford lets you mix and match various features found on some higher trims, so even though push-button ignition isn’t standard on our Fiesta, you can always option it if you so desire.

Naturally, the biggest draw comes from Microsoft’s Sync system. Drivers can connect a thumbdrive, MP3 player, or iPhone via the USB port conveniently located below the shifter. Sync will then take your music library and index it, allowing you to search by album, artist, and genre. From here you have two options for navigating the menus: use the physical buttons or voice commands. As we mentioned, the physical buttons are awkward and unresponsive. You have to tug on the knob and push it in, despite it seeming more intuitive to simply let it function as a dial. Pushing in the control knob also requires an unusual amount of force, making it a hassle and not something we recommend fiddling with while driving. Another gripe stems from the monochrome display itself, which is only capable of displaying one item line at a time.

Fortunately, voice commands are better. Accessing your music library whether it’s on a USB drive or dedicated MP3 player is relatively easy. Simply activate the voice command hidden away on the turn signal handle and you can sift through your tracks by album or artist name. Pairing the phone via Bluetooth is easy too, placing calls via the voice commands required a little more legwork, but once we figured out that we could simply say the name of the person we wished to call it wasn’t an issue.

The same cannot be said for streaming music or using Ford’s AppLink feature. For those not familiar with Applink, this nifty interface allows you to control a growing number of apps hands-free on a supported smartphone. At the moment these are all audio-based, so that means apps like Pandora and Slacker for music, NPR and Sticher for news, and MLB.com At Bat for… well, you get the picture. Sync will even read your Twitter feed out loud for those of you with Blackberrys (all 50 of you).

Where problems arise, however, is with how poorly implemented this particular feature felt, especially with an iPhone. Streaming music requires your application be running and plugged into the USB port, and what’s more, in the Fiesta, we couldn’t switch apps while driving without the Sync system causing the service to, well…go out of sync. It got so bad that after a while the Sync system stopped recognizing our phone altogether, requiring us to shut off the engine entirely before it would recognize our phone again. We’re not sure if this was just an isolated incident, or maybe some odd problem with iOS 5, perhaps iOS 6 will be better, but it effectively sullied the entire Sync experience

Powering the little party on wheels is a 1.6-liter inline four that produces 120 horsepower and 112 pound-feet of torque. The 2012 Fiesta comes standard with a five-speed manual or an optional six-speed automatic. EPA fuel economy stands at 29 mpg in the city, 38 mpg on the highway, and 33 combined when mated to the manual. For the automatic, everything stays the same, save for highway mpg which rises slightly to 39.

Overall, the 2012 Fiesta exhibits the type of spirited performance consumers in the segment will appreciate. It’s not without its quirks though and can be a pest when demanding a modicum of torque at low speeds. Awkwardly, the Fiesta manages to be both lively and lazy, with the automatic transmission behaving erratically at times for no apparent reason. This is mainly when tackling greater inclines and hills, but we noticed it during spells in the city as well.

More than anything else, where we derived the most joy during our time with the Fiesta was with its excellent handling. From nimble to sprightly, dynamic to energetic, throw whatever descriptor you like and the Fiesta manages to encompass it. In addition to its design, this is where the Fiesta manages to reveal its European roots the most, exhibiting the type of capable handling, road characteristics, and tightly-tuned suspension we rarely see (or get) on these shores.

Without a doubt the 2012 Ford Fiesta is a pleasure to drive, and offers one of the most rewarding drive experiences in its class and beyond. It might be priced a little excessively; our review unit came in at $18,255 including destination, and it’s 1.6-liter may be a little too lackadaisical for our tastes, but we’re hard-pressed to think of another vehicle in this segment that has yet to illicit such joy while on the road.

As a subcompact car, the 2012 Fiesta knows how to party… it’s just not the perfect party and many won’t mind not being invited. There are real issues here that keep the Fiesta from being that all-night rager most of us can barely remember, but it still possesses enough quality to warrant serious consideration. Let’s not forget that this is a segment with plenty of cheaper alternatives, and because Ford has chosen to be just as aggressive with its pricing as it has with its excellent design, we’re not sure consumers will be willing to spring for the Fiesta when other viable alternatives exist in the Honda Fit, Chevy Spark, Nissan Versa, and Kia Rio.

That being said, for those that can look beyond its relatively cramped quarters, quirky design layout, and finicky Ford Sync system, there is a truly rambunctious car at heart, one that can equally appeal to your fuel-sipping frugality and need for good ol’ fashioned fun.