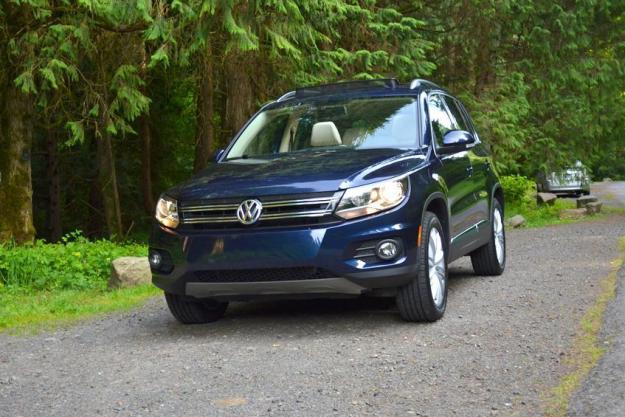 “We certainly applaud VW for attempting to provide a compelling crossover; but there are other (read: less costly) options out there that warrant you attention.”

The 2012 Volkswagen Tiguan isn’t your typical blue collar crossover. In fact, it seems the recent trend within Volkswagen sees the company attempting to occupy a rather unique space just above the standard automotive segment and just below the luxury segment inhabited by its corporate sibling, Audi. By doing so, or at least trying to do so, the German automaker is attempting to differentiate itself from the rabble, and at the same time elevate the VW brand above the competition. A quick glance at the 2012 Volkswagen Tiguan and you’ll see a perfect example of this strategy.

Is it a smart move? It certainly has potential. But it requires a deft hand and comes at a price. The real question, in this instance, is whether or not consumers are willing to pay a premium for what is ostensibly a fairly standard compact SUV. Nevertheless, while the Tiguan offers up an engaging ride — compliments of our review models blissfully smooth 2.0-liter turbocharged engine — the whole foundation starts to crumble when you take into account the Tiguan’s hefty sticker price, which goes on to beg the question: is the 2012 Volkswagen Tiguan really worth it, or are you just paying for power?

But before we delve into all that, let’s take a closer look at Tiguan.

You’ve got the look

Stylistically speaking, the 2012 VW Tiguan doesn’t venture down the more visually eccentric path many other crossover SUVs so often drive down. Instead, the car’s aesthetic manages to strike a perfect balance between power and sophistication, without being overly pretentious. And while we hate to describe the car as masculine (a cliché, at this point) we can’t quite maneuver around it. Simply put, the Tiguan is a handsome array of sheetmetal.

While we happen to be fans of some of the more “out there” crossover designs, the Tiguan tows a more conservative line with its styling – and is at times a spitting image of its bigger and older sibling, the Toureg.

Overall, VW has done a stellar job in designing the 2012 model, which has received only minor cosmetic upgrades from last year’s outing. Still, with the car’s prominent in-your-face VW badging, chrome accents, and altogether smart look, the 2012 Volkswagen Tiguan is a car you’ll consistently look stylish in no matter what you pull up next to.

By far the Tiguan’s biggest draw on the inside is the gigantic panoramic sunroof, spanning for what seems to go on for miles overhead. It’s well done; it’s dynamic; and it almost washes away most of the gripes we have with the Tiguan’s interior — almost.

There’s a lot to be said about the Tigaun’s interior: some good, some bad. It’s not that the interior isn’t snazzy — it is, in many ways — but the Tiguan can’t help but hit more than a few low notes in an otherwise solid performance. (More on than it a minute.) What does work on the inside is how well-placed everything is. VW seems to have a knack for keeping things simple without being boring. Where other automakers seem inclined to ad knobs, gauges, and buttons with reckless abandon, VW takes a different, some would say very German, approach. And we like it.

Accessibility is the name of the game here, and the Tiguan is in the running for MVP. Virtually everything auxiliary to the driving experience is within reach. From the easily accessible volume and call buttons that flank the leather wrapped steering wheel, to the smart and simply placed console controls on each side of the navigation system’s LCD touch screen – it’s easy to get to and easy to forget, which is exactly what we want while driving.

Speaking of touchscreens and navigation systems, we really have to commend VW for its intuitive interface. VW has one of the best we’ve come across. The screen in the Tiguan is small enough not be a nuisance and large enough that we don’t have to squint in order to see what the heck we’re doing. While we’ve resigned ourselves to being disappointed from other manufacturers’ touchscreen interfaces, that simply isn’t the case here.

As mentioned,there is a number of issues that plagued our 2012 Tiguan experience. What we took most umbrage with on the inside was the Tiguan’s space, or lack thereof. In the driver’s seat, the Tiguan is quite comfortable, and our upfront passengers had very much the same experience. The back is a different story. While the Tiguan does a fantastic job of making you feel like you’re sitting in a first class cabin (that nice big sunroof certainly helps perpetuate the illusion), those relegated to the back (the Tiguan seats three in the back, but that’s pushing it) might just as easily liken it to being stuck in coach with a baby crying in their ear and another doing his best Bruce Lee impression to their seat. That is to say, aside from small children, those in the rear cabin will want to stretch their legs.

Your day-to-day grocery shopping and storage needs will likely be met with the hold’s 23.8 cubic feet of cargo space. But as you can see, space is somewhat of a commodity inside the 2012 Tiguan. Sure the rear seat splits 60/40, expanding the cargo space to 56.1 cubic feet, but trunk real estate is still comes up short when compared to vehicles like Honda’s popular CRV and the Chevrolet Equinox.

The 2012 Volkswagen Tiguan is offered in three different trim levels: S, SE, and SEL, each sporting either front or all-wheel drive layouts. Our review unit fell into the SE category, which features Volkswagen’s 4Motion all-wheel-drive and a 2.0-liter turbocharged engine that comes standard across the various trim levels. The all-wheel-drive version is available only with a six-speed automatic transmission, while drivers wishing to assert more control of their auto should opt for the six-speed manual, which only comes with a front-wheel-drive set up.

As far as mileage and fuel economy is concerned, we ended up being quite pleased with the Tiguan’s returns. The official EPA rating for our all-wheel-drive model sits at 21 in city, 27 highway, and 23 combined. Throughout our road test, both in the city and on the highway, we typically found those figures accurate and consistent, only experiencing a slight drop when putting the car through its paces. Still, while the Tiguan meets an acceptable standard in fuel economy, it trails both the Nissan Juke and Honda CRV, both of which hit the coveted 30 mpg mark with their compact crossovers.

Apart from that gorgeous sunroof, which we’re still swooning over, by and large the best part of the 2012 VW Tiguan is its turbocharged, 200-horsepower-pumping, 2.0-liter, four-cylinder engine. We’re already huge fans of Wolfsburg’s peppy powertrain and have been ever since our review of the 2012 VW Beetle. But our road time with the Tiguan has further cemented our admiration.

Whether it was on the highway, in the city, or some serpentine back road, the Tiguan never failed to provide that spool of torque when called upon. Not only was it responsive, but it made driving the Tiguan fun, at least for a time.

It was only when the adrenaline subsided and we required more than just a punch of power that things started to go awry. Without a doubt the Tiguan is more than capable pushing the wheels, but truly exhibits a shameful degree of impotency when it comes to handling. Like a forlorn lover we called upon the Tiguan time and again, only to have our calls left unanswered.

For all that power, the Tiguan isn’t very agile. Sure the suburban straight-a-ways will prove facile for VW’s compact crossover, but during our drive tests, even the slightest turn translated into a feeling that this towering Tiguan was sure to topple. We’ll admit it feels trivial at first, but well before our week of reviewing the car was over, it was starting to take a toll on the entire experience. To us, that simply doesn’t fly.

In a twist of automotive irony, the very best aspect of the 2012 Tiguan, the car’s beastly 2.0-liter turbo, happens to coincide with the very worst of it: the Tiguan’s high price. To be fair the 2012 Tiguan base model enters the market at an agreeable $23,660, but our mid-level SE 4Motion all-wheel-drive model tips the scales at $33,3000 including a $820.00 destination charge, which is simply too pricey, especially when you take into account the car’s pedestrian handling. The buck doesn’t stop there, though. Customers looking to spend real German money can expect to shell out a little under $40,000 for VW’s top of the line SEL trim.

In the end, the 2012 Volkswagen Tiguan is largely let down by its sky-high sticker price, teeter-totter handling, and lack of features that should otherwise be well represented in a vehicle of its price and stature. Unfortunately, not even its energetic drivetrain, distinguished design, and smart interior can rescue it from the competition. Ultimately it comes down to a question of value — a concern we’re not especially familiar in dealing with when it comes to German autos – and whether you want to pay through the nose.

Nevertheless, we admire Volkswagen’s tenacity in trying to build nicer cars with slightly higher MSRPs, but we’re just not willing to pay that premium until VW’s self-projected image actually becomes reality. For a car priced at over $30,000, the omission of features like dual-zone climate control, leather interior, power seats, and automatic headlights just won’t cut it. We certainly applaud VW for attempting to provide a compelling crossover; but there are other (read: less costly) options out there that warrant you attention. Hope isn’t lost though: if VW can bring down the price, throw in some added features that give consumers more bang for their buck, there is notreason why the Tiguan can’t reach those lofty heights — until then, we’ll respectfully decline.