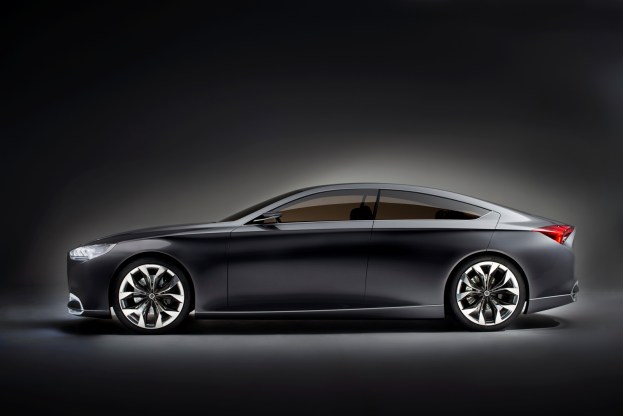 BMW. Mercedes-Benz. Hyundai. One of those things is not like the other, but Hyundai has been trying to change that with its Genesis and Equus sedans. The Korean carmaker took another step toward that goal at the 2013 Detroit Auto Show with the HCD-14 Genesis concept.

Hyundai hopes an updated version of its “Fluidic Sculpture” design language, called “Fluidic Precision,” will give its cars a more premium look. The HCD-14 Genesis sort of pulls that off. Its simplistic profile, defined by a sharp crease parallel to the window line, evokes the Audi A7.

The front end, though, is rather un-elegant. It’s giant upright grille and thin headlights, which make the HCD-14 look like it has jowls, give the impression of a knockoff luxury car rather than the genuine article.

Hyundai calls the HCD-14 Genesis a “premium sport four-door coupe,” which would put it in the same category as the A7, Mercedes-Benz CLS, and BMW 6 Series Gran Coupe. None of those cars have rear-hinged suicide doors, though.

With the rear doors providing easy access, passengers enter an interior packed with tech. The asymmetrical center console gives all of the important controls to the driver, but makes room for an iPad dock. Eye tracking and 3D gesture recognition are meant to further cut down on distractions.

The eye tracking feature allows the driver to select a function, while the 3D system allows him or her to use minimal gestures to make their selection.

These new technologies help the driver control audio, navigation, HVAC, and smartphone connectivity functions. Combined with a head-up display, Hyundai says eye tracking and gesture recognition keep the driver’s eyes on the road the majority of the time.

This may be a concept car, but Hyundai decided to make it drivable as well. However, the drivetrain is more realistic than the styling or futuristic infotainment interface. Under the hood is the same 5.0-liter Tau V8 from the Genesis 5.0 R-Spec and Equus. It’s mated to an eight-speed, paddle-shifted automatic transmission.

To give the HCD-14 Genesis a sporty feel, Hyundai also gave it five-link front and rear suspension and performance tires. Electronic nannies include a yaw control system and multi-mode power steering.

The HCD-14 is just a concept car, but seeing as it shares its name with Hyundai’s current premium sedan, it seems likely that certain features will make it onto future production cars. The styling and infotainment system are the standouts, but whether they can make it to production undiluted is the big question. First, Hyundai should do something about that grille.