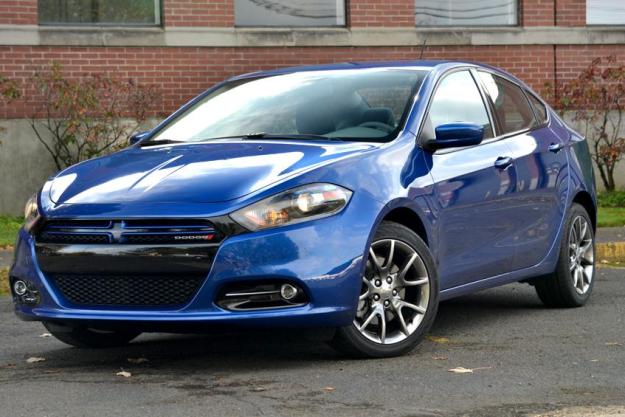 “Chrysler needs this car to do well and the company has developed something that should resonate with consumers on many levels.”

After a short hiatus that saw us waving goodbye to the Dodge Neon in 2005 and hello to strapping, muscular V8 fire-breathers such as the Dodge Challenger and Dodge Charger, Chrysler makes its much-hyped return to the compact car segment with the 2013 Dodge Dart. More than the hype and catchy commercials surrounding the vehicle, the 2013 Dodge Dart is an important car, one that not only expands Chrysler’s automotive profile, but also demonstrates to the world that the Italian-owned American automaker has the propensity to deliver a vehicle that is stylish, fun, and above all fuel efficient. With Alfa Romeo DNA coursing through its veins, the 2013 Dodge Dart aspires to go toe-to-toe with the perennial compact kings from Japan, but does the Dart hit the bullseye? Or does it whizz past the mark unconvincingly?

The 2013 Dodge Dart is available in five trim levels: SE, SXT, Rallye, Limited, and R/T, which is due sometime later this year. For our 2013 Dodge Dart review, we were given the keys to a Rallye edition, which straddles the middle to upper end of the spectrum. Potential buyers will be happy to learn that the Dart is priced rather competitively. Base price for the standard SE model starts at $16,000, while our Rallye review unit will run you $18,000 in its most Spartan form (though that figure swells to $23,500 once all of its options have been tallied up). For those holding out for the R/T version, base price is expected to be $22,500.

Stepping inside the Dart, we were immediately taken back by how clean and modern the interior is designed. The dash sports a flowing, almost fluid aesthetic that seems to wrap itself comfortably around the driver, while at the same time complimenting its fun design with a good degree of utility.

One of the interior’s most notable features is what Dodge designers call the “floating island” bezel, which traces around the main instrument cluster and navigation display. It’s undeniably useless but equally cool, and really, that’s what matters. Of course if you insist on being a slave to function, the Dart has some tricks up its sleeve, like a cargo space located underneath the passenger seat.

Tech features are starting to become more and more standard these days, taking up increased real-estate in the vehicles we drive, and the 2013 Dodge Dart furthers that trend. Proving more useful than the floating island bezel – and just as eye-catching – the Dart’s 8.4-inch touchscreen performs just as sharp as it looks, and is the biggest offered in a compact car, making that rear-view backup camera a breeze to eyeball.

Unsurprisingly, the key component to a successful touchscreen is the level of responsiveness it exhibits when trying to navigate its menus with your prodding digits. Thankfully, the Dart’s touchscreen is not only responsive, but vivid and intuitive thanks to those large screen icons. If, however, you prefer controlling various systems like volume and climate the old-fashioned way, there are buttons and dials located on the steering wheel and below the digital display. Speaking of digital displays, we were disappointed to learn that our Dodge Dart Rallye trim doesn’t include, or even offer, the same LCD instrument cluster offered in the Limited and R/T trim, so buyers wanting the utmost in tech will naturally need to spring for a higher trim. Lame.

Overall users will be plenty pleased with the Dart’s touchscreen and navigation. Shuffling through the menu is a breeze, and the controls are both quick and responsive. There are some issues that arise when actually using the vehicle’s Garmin-sourced navigation, though. Aside from the visual inconsistency (it never really meshes entirely with the Dart’s sleek interface), we witnessed on more than one occasion that the navigation had trouble displaying we were on a major road. This seemed to happen intermittently and ultimately the system would correct itself, but it proved irritating after a while.

The Dart’s voice recognition function also lags significantly. And while syncing our phone was a breeze, as was making calls and entering a single address string for directions, the whole system seemed to stutter when trying to make use of its hands-free functions. It’s not a dealbreaker, and as a whole the entire system works well, it’s just noticeably slow at times. Potential buyers with a little patience shouldn’t be deterred.

In addition to AM/FM and Sirius Satellite radio, the Dart allows users to connect their iPods or compatible smartphones via USB or Bluetooth for music playback. Playback through either one is simple enough once your phone is paired, but we had two gripes when playing music via apps like Pandora and Spotify: The Dart’s interface does not display artist or track titles, and the system had trouble reconnecting to our phones once exiting and returning to the vehicle. Granted this only happened on a few occasions, but for those who love to stream music via their smartphone, the Dart’s system could be better.

Aesthetically speaking the 2013 Dodge Dart is in a league of its own. The only other car in the compact class that comes close to matching its visual potency is the 2013 Hyundai Elantra, and maybe the 2013 Mazda 3. This alone speaks volumes as to what is and has been traditionally on offer in the segment, which, suffice it to say, isn’t much. Indeed, it seems most automakers are either content with resting on their reputation (Toyota, Honda) or simply don’t raise the bar high enough, as is the case with the 2013 Chevrolet Cruze.

With its signature “cross-hair” grille and rounded proportions, the Dart’s design in some ways harkens back to the Neon’s cute and bubbly proportions. The Dart, however, is anything but cute with its wide stance and flared-out arches. From the side, the Dart appears slightly raised on its rear haunches, giving it an almost cat-like quality. At first glance, it looks as if the Dart is ready to pounce and features a design that is neither boring nor contrived. We give credit to Dodge’s design team for delivering a compact car that blends attitude, style, and athleticism. Around back, the Dart unapologetically borrows its bigger brother’s (Dodge Charger) racetrack LED tail lamp cluster to great effect, and coupled dual oval-shaped exhaust tips only serves to bestow more power to the Dart’s visual punch.

Standard on all Darts, save for the R/T model, is a 2.0-liter four-cylinder engine capable of producing 160 horsepower and 148 pounds-feet of torque. A six-speed manual transmission is standard, while a six-speed automatic is offered as an optional upgrade. Drivers also have the option of upgrading to a 1.4-liter turbocharged engine that retains the 2.0-liter’s 160 hp but ups the torque to 184 lb-ft. Lastly, when it debuts, the top-end R/T model will feature Chrysler’s Tigershark engine that displaces 2.4 liters and capable of pumping out 184 hp and 171 lb-ft of torque.

Appeasing our purist’s heart, our Rallye review unit came equipped with the standard six-speed transmission and upgraded 1.4-liter. Overall we found the Dart to be succinctly quick off the line, delivering a sporty character rare in the compact segment. But getting the most from the Dart’s 1.4-liter engine required a little effort on our part, and it isn’t until 3,000 rpm that the Dart yields the most power. Generally speaking, those who opt for the manual and throatier 1.4-liter turbo will find the most joy from the Dart.

Of course the Dart’s mandate is about more than delivering just fun and functionality to the compact segment: Fuel economy plays an important role. We’re happy to report the Dart delivers with some impressive EPA fuel economy numbers. It’s capable of achieving 27 mpg in the city, 39 mpg on the highway, and 32 mpg combined when equipped with the optional 1.4-liter turbo and mated to a six-speed manual transmission. Opting for an automatic transmission sees those numbers dip ever so slightly to 27/37/31. While fuel economy isn’t as strong, the standard 2.0-liter is no slouch, with an EPA-rated 25/36/29 when mated to the manual and 24/34/27 when outfitted with an automatic.

There’s no denying the 2013 Dodge Dart has a lot of character, both inside and out. It looks sharp and has the personality of a wise-cracking mobster, only less obnoxious. Chrysler has continually talked up the Dart’s “Alfa DNA,” and while we admittedly brushed it off as nothing more than hyperbole, this is one instance where an automaker wasn’t just blowing smoke up our tailpipe.

With the Alfa Romeo Giulietta underpinning the 2013 Dodge Dart, we’re not surprised how well the Dart whizzes down the road. The electric steering is tight and responsive thanks to some tweaking from the Dodge team, and when entering into a corner the Dart exhibits a great degree of poise and confidence. Up front, the Dart’s suspension consists of independent MacPherson struts, while the rear sports an independent multilink suspension. Whether we were cruising the highway or carving out aggressive switchbacks, the Dart tackled virtually everything we threw at it.

The 2013 Dodge Dart isn’t entirely free of automotive blemishes though. The 1.4-liter turbo engine suffers a great deal of turbo lag on hand at the lower end, so don’t expect to power out of corners as quickly as you’d like. And while the Dart’s European-sourced suspension performs well the vast majority of the time, we felt it didn’t soak up road deficiencies as well as we would have liked.

Nitpicks aside, the 2013 Dodge Dart provides a remarkably refined driving dynamic, but don’t let its scowling mug and outward attitude fool you; it packs much more bark than bite.

At the end of the day, the 2013 Dodge Dart isn’t just a car, it’s a statement. Chrysler needs this car to do well, and from what we have witnessed, the company has developed something that should resonate with consumers on many levels. Not just because it’s remarkably stylish (we still can’t get over those super-slick racetrack LED lights in the rear); not just because it’s exceptionally roomy (it is); not just because it sports some truly impressive cabin tech (it most certainly does), but because overall the Dodge Dart is an exceptional car. It deftly delivers all those aspects together, while delivering exceptional fuel economy, coupled with a value-driven price point: base SE models start at $16,000 while the R/T model should max out at $22,500 when it arrives.

The compact sedan segment is a lively one, easily the most competitive it has ever been: Heavy hitters such as Toyota and Honda still deliver solid – if not a tad anemic – Corollas and Civics; the Mazda 3 is kicking asphalt and taking names; Ford’s redesigned 2013 Focus is both stylish and competent,; and Hyundai and Kia crashed the party with the Elantra and Forte, respectively. Seizing control of the segment will not be easy for Chrysler, but with the 2013 Dodge Dart, Chrysler, with a little help from its Italian owner Fiat, may have just given us an offer we can’t refuse.

For more photos of the 2013 Dodge Dart, check out our photo gallery.