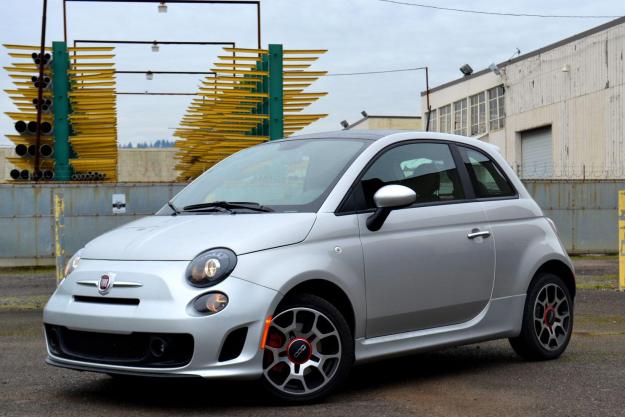 “With automakers so obsessed with crossovers, hybrids, and making cars bigger in general, it’s refreshing to see a company like Fiat re-enter the American market with a car that’s small, fun, and unapologetically European.”

When it comes to pure style, does anybody do it better than the Italians? Fuhgeddaboutit!

Now in its second year of production, and after nearly three decades in exile from American shores, the Fiat 500 returns for 2013 with the same syrupy sweet sass and sprinkle of sporty goodness that has endeared this city dweller’s compact car to so many throughout its storied history.

A car with a personality

Designing a thoroughly appealing car inside and out is a job we certainly don’t envy (ok, so maybe we do a little). Nevertheless, it’s a job Fiat’s designers have done with great success. While onlookers will undoubtedly be drawn to the car’s bubbly exterior, the interior is what actually steals the show.

Inside the design layout is equal parts fun, funky, and functional (for the most part). Think of it as cross between Pee-Wee’s Playhouse and a Dali painting and you’re nearly there. (Hint: the secret word of the day here is “crazy-awesome”). From its two-tone color schemes to the Mini-like circular instrument gauges, the 500’s interior grabs your attention right away and never let’s go.

It’s not all perfect though. While we commend Fiat for placing such a great emphasis on fun, some design choices are questionable.

For starters, the 500 oddly places window controls on the center console. While a seemingly minor design preference, nearly every drive we took included a moment where we felt utterly disoriented searching for the damn window controls.

Instead of a standard door-lock buttons, Fiat integrates these into the door handles themselves. Is it neat? Sure it is. But it’s just one of those design choices you’ll either love or hate.

Though the Fiat 500 is one of the smallest cars on the market, it’s surprisingly roomy given its diminutive dimensions. But don’t let those back seats fool you; while the 500 can technically fit four, two adults with a couple of Hobbits thrown in back seems more appropriate.

Taller drivers/passengers should also pay heed: head and shoulder room is limited, especially when optioning the power sunroof (a $950 option).

Cargo room on the other hand is surprisingly abundant if you don’t mind some seat shuffling. The Fiat 500 offers a modest 9.5 cubic feet of space, which is more than enough for a trip to the grocery store. If that simply won’t do, fold those seats forward, slap on that European mankini, and prepare to swim in a sea of 30.2 cubes.

Where the Fiat 500 truly fails to impress is with its inadequate on-board tech.

Fiat also throws in its Microsoft-developed Blue&Me system, which – similar to Microsoft’s SYNC – allows for hands-free communication between mobile and USB devices. But while Blue&Me may sound friendly, it quickly slams the door on any potential long-term relationship due to its erratic behavior.

For example, the absence of a navigation/touchsreen in our 500 Turbo review car required pairing be done by pressing the voice-control button located on the steering wheel and then speaking aloud the command for pairing, which intuitively enough is simply: “pair device.”

Once that’s complete, drivers are required to enter a multi-digit code (sigh) followed by the option to import their contacts list. Initiating hands-free calls by simply speaking a person’s name requires that an address book be paired the vehicle.

Overall, receiving and placing calls worked relatively well. There were times when Blue&ME had trouble recognizing our commands, resulting in multiple attempts, which quickly grew irritating.

Similarly, once your phone is paired, Blue&Me will intercept any text messages you receive and request to read them aloud. Our recent review of the Ford Focus Electric highlighted this feature; only in the Focus EV there is a button to disable the function. In the Fiat 500, however, no such button exists. So passengers will be able to listen in while the car’s robotic voice reads aloud all your messages — even the mushy/really private ones.

Where Blue&Me truly stumbles, though, is how poorly it interacts with music devices. The Fiat 500 does not support Bluetooth music streaming (odd given the youthful demographic the company is targeting) nor does it allow you to cable your phone to the car and stream music from apps.

Music that is stored locally to your phone will play, however, but don’t expect it to work smoothly. As far as we could tell, there is no discernible way to sift manually through artists, albums, or playlists when using the head unit or steering wheel controls.

The 500 Turbo is only available with the five-speed manual, which should please enthusiasts, and is by far our top choice.

Playback was less troublesome with an iPod, but still suffered from the same interface problems plaguing music selection. Our only workaround was to physically unplug the iPod and manually select what track, playlist, or album we wanted to play, then plug it back into the USB port.

While Blue&Me is supposed to help with DJ duties through its hands-free functionality, not once were we able to change tracks via voice controls. Not cool, Fiat. Not cool at all.

Despite our desire to see Blue&Me sleep with the fishes, our car included a number of niceties such as heated front seats , automatic temperature control , security alarm, and upgraded Beats stereo system ($1,500), which adds six premium speakers and a subwoofer.

The heated seats alone were a lovely addition and not a feature you see very often at this price point (our review car came in at $24,000), and even though the Beats system isn’t going to resonate with pure audiophiles, it offered a pleasant listening experience that most will enjoy.

For the most part, the style quotient ratchets up with each subsequent model, with the Pop and Lounge trims forgoing the exterior styling tweaks for more straightforward appointments. The Lounge model in particular adds 15-inch wheels, chrome exterior trim, and a fixed glass roof.

While all the 500 models are head-turners in their own right, short of the Abarth, we found our 500 Turbo review model the most aesthetically appealing, which included a number of styling touches that bestowed levels of confidence and sex appeal typically reserved for Milan catwalks.

Still, the Fiat 500 won’t be everyone’s cup of tea (cappuccino?) but credit to Fiat for creating a retro-styled, modern version of the classic Cinqucento (500) that can be both sickeningly cutesy and deliciously debonair.

The Fiat 500 is no Mona Lisa of the automotive world, but we imagine if Leonardo da Vinci were alive today, he’d rock one. Assuming, of course, he wasn’t busy buzzing around in his personal gyrocopter.

Three engines accompany the Fiat 500 on its trans-Atlantic journey to U.S. showrooms: the Pop, Sport, and Lounge models all receive a 1.4-liter inline four-cylinder that produce 101 horsepower and 98 pound-feet of torque. The 500 features a front-engine, front-wheel-drive setup and comes mated to a standard five-speed manual transmission or an optional six-speed automatic ($1,250).

As we already mentioned, Fiat has added a new Turbo model for 2013, which gets a 1.4-liter, 16-valve MultiAir turbocharged engine, boosting output to 135 hp and 150 lb-ft of torque. In addition to providing that extra nudge off the blocks, it has one of the most melodically sweet engine notes we’ve ever listened to at this price.

The 500 Turbo is only available with the five-speed manual, which should please enthusiasts, and is by far our top choice. If you’re like the majority of drivers these days who don’t know how to drive a stick, now’s the time to learn.

Finally, for the truly wicked, the all-conquering Abarth model gets an even greater engine overhaul, which sees hp jacked to 160 and lb-ft of torque to 170.

Depending on the transmission, fuel economy is rather stellar in the Fiat 500, diminishing only slightly between the naturally aspirated 1.4-cylinder, and the turbos that power the 500 Turbo and Abarth models.

Fuel economy remains respectable in both the manual-driven Turbo and Abarth models, netting 28 mpg in the city, 34 on the highway, and 31 combined.

Despite its eccentric styling, you’d be forgiven for mistaking the Fiat 500 as a car devoid of any driving pleasure. At face value, it ticks all the right boxes for a car that caters to economy over any degree of excitement. And yet, that couldn’t be further from the truth.

Simply put, the Fiat 500 Turbo is a fun car to drive. Behind the wheel there is a real sense of excitement and freedom that this little car happily bestows upon you.

Initially, its size may drive some people to feel caged and claustrophobic, but for us the diminutive nature was more freeing than anything else. Zipping in spaces others dare not and jetting about town with an assuredness that typically escapes larger vehicles, driving the 500 Turbo just felt so effortless.

Your smileage will undoubtedly vary at the lower end of the spectrum (read: the Pop, Lounge, and Sport Models) but the 500 Turbo is simply a joy to drive. Combined with the vehicle’s smooth-as-butter transmission and you have a car that handles supremely in traffic, cruises confidently on the freeway – keeping pace with traffic and overtaking cars with ease – and isn’t afraid to mix it up in the curves, either. For that last scenario, a sport button located on the center console quickens up acceleration, tightens up the throttle, and sharpens up the suspension.

The Fiat 500 is an exceptional vehicle.

With automakers so obsessed with crossovers, hybrids, and making cars bigger in general, it’s refreshing to see a company like Fiat re-enter the American market with a car that’s small, fun, and unapologetically European.

With so many trims to choose from, there is a Fiat for nearly every driver, and its excellent mix of fuel-economy, driving dynamics, and style help seal the deal for anyone on the fence.

Our only major complaint comes in the form of its scant tech offerings, which for some may prove too abysmal to ignore.

Nevertheless there is a palpable thrill – energy even – when behind the wheel of this feisty Fiat; a swagger most vehicles rarely muster regardless of their size.

Is the 2013 Fiat 500 an offer you simply can’t refuse? No. But if driving this little beauty proves anything, it’s that size doesn’t matter.