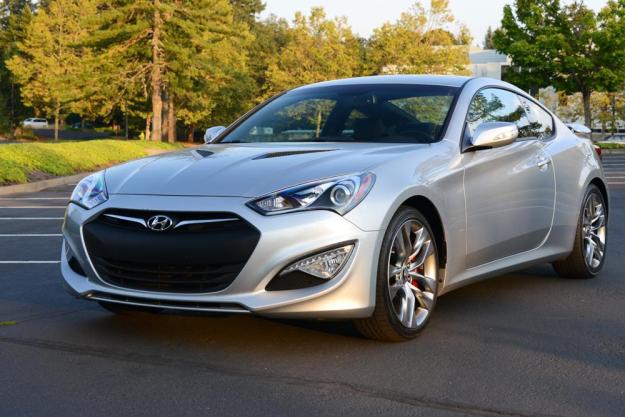 “The 2013 Genesis Coupe is a fun departure from what we have come to expect from Hyundai, and a welcome improvement over previous iterations.”

Many an eyebrow raised when Hyundai released the Genesis Coupe back in 2008. The Korean automaker’s decision to enter the sports coupe market formerly occupied by Honda, Mazda, and Toyota, and currently dominated by the likes of the Ford Mustang, Chevy Camaro, and Dodge Challenger, was nothing short of ballsy. With the introduction of the Genesis Coupe, Hyundai wanted to break free from the shackles of its sensible sedans and bargain-bin offerings and offer something new — something real car enthusiasts could truly get excited about

Is it “mission accomplished” for Hyundai? It’s tough to say; the Genesis Coupe — along with some newer, more exciting offerings, like the Veloster Turbo — has certainly helped change people’s perception of the brand. And while the initial batches of Genesis Coupes were impressive, they lacked the refinement some of the more established pony car marquees like the Mustang and Camaro possess.

Flash forward to 2013 and the Genesis Coupe is back. While it’s not an American pony killer quite yet, it’s backed by enough mid-season refreshments to get people talking and heads turning.

A sports car through and through

Giving cars a visual cadence that lasts can be tricky. Sure the 2013 Genesis Coupe doesn’t evoke that same sense of awe the galloping beasts from Detroit exhibit, but it is a good-looking piece of sheet-metal all the same – just not as stunning.

Nevertheless, there is no mistaking the Genesis Coupe as anything other than a sports car. Up front, we’re treated to Hyundai’s signature hexagonal fascia — which has been blacked out — a large, gaping maw with just a hint of brightwork up top and to each side of the Hyundai badging. Some visual touch-ups have been worked into our 2013 3.8 Track trim review unit, such as sharp LED running lamps up front and in the rear. Other visual cues include added character lines cascading down the hood, along with dual air intakes that help give the Genesis Coupe that aggressive go-fast appeal.

More so than anything else, eyeing the Genesis Coupe from the side provides the greatest visual hint of how athletic the car truly looks. Here we are again treated to running character lines that arc along the side and flow seamlessly around the rear into the dipping decklid. As any sports car should, the two-door coupe flaunts a high beltline that compliments the car’s aerodynamic, low-slung shape, while 19-inch five-spoke summer tires and red Brembo brake calipers also add to the visual flare.

Around back, Hyundai have given the taillamps a sharper level of detail, while a rear spoiler, with its own strip of LEDs, equips the Genesis Coupe with the credentials for speedier endeavors. We’re also fans of the flattened dual exhaust tips. It’s worth noting that the rear of the Genesis Coupe has received the least amount of attention for the 2013 model year, but the overall package is smart, with a personality that helps it stand out in a crowd of other sports coupes.

Comfort and curves, but a little cramped

The visual feast doesn’t end inside the cabin, thanks to the 2013 Genesis Coupe’s dipping, swooping, and striking contours that shape the exterior so well. Most of it works really well, while other aspects requite some not-so-conventional design compromises, like power and mirror switches that are placed along the door panels. As for material quality, everything is top-notch. Nothing feels cheap, and the leather-wrapped steering wheel and seats only serve to help accentuate the cabin’s high-caliber character. Other little visual touches help too, like accent stitching along the dash and illuminate side sills.

As far as comfort goes, the Genesis Coupe delivers. The seats are shaped so that they cradle you in; and although they were a little more firm than we would have liked, it never became uncomfortable, even during longer drives. Driver position is also excellent and can be adjusted via the power seat controls. For 2013, Hyundai added telescoping steering, so whether you’re short, tall, or somewhere in between, you should have no problem finding the perfect setting.

Where the 2013 Genesis Coupe falters, however, is with the rear seating. Naturally, this isn’t a family car, and trying to fit anyone other than shorter passengers or children isn’t recommended. And remember those power seats? Well, they are painfully slow when trying to get people into the back, so keep than in mind as well.

That said, cargo room is surprisingly spacious given the vehicle’s ground-hugging frame. It’s nothing to write home about, but at 10-cubic feet, there is just enough space for hauling groceries or smaller luggage to and fro.

Obviously how many tech features a car is packing matters to us, which is why we’re impressed by the abundance provided in the Genesis Coupe. We just wish it would work a bit better.

Let’s start with the basics. Accompanying our 2013 Genesis Coupe Track trim were such amenities as keyless entry with push-button start, Xenon HID headlamps , CD/MP3 player, AM/FM radio, XM Satellite Radio, and upgraded 10-speaker Infinity sound system, the last of which wasn’t all that impressive to the ear. Generally we have been pleased with the audio quality Infinity sound systems carry, but for whatever reason, the mid-range seemed faded and the base levels too low. After some tinkering we were able to get it to sound better, but it never dazzled us.

As with most cars these days, Bluetooth hands-free calling and audio streaming is available in the Genesis Coupe. We wish we could say pairing the device was easy, but it wasn’t. While many vehicles annoyingly require you to be stopped before pairing any devices, the Genesis Coupe takes it a step further and requires that the handbrake is engaged. Once paired, though, placing calls via the hands-free system or steering wheel controls is a relative breeze. The only other trouble we ran into was streaming music from our smartphone. Here is where the Genesis’ system truly becomes picky. While playing music directly from our iPod library was easy, streaming tunes from an app source, like Pandora or Spotify, required some fiddling. Rather than simply syncing your phone and bringing up the app — or better yet, starting the app automatically like so many other interfaces do, including other Hyundai models — the system in the Genesis Coupe will only recognize an app if it’s already launched before you plug it in. Needless to say, it’s disappointing that the interface in the Genesis is so lacking when other 2013 model year Hyundais are so much easier to operate.

Thankfully, the Genesis’s Bluetooth aches don’t carry over into the navigation system, which is accompanied by a seven-inch LCD touchscreen. During our road testing, we found the nav system to be incredibly easy to use and the touchscreen responsive. Drivers can set destinations by local landmarks or enter in street addresses. There is even a button for various points of interests (POIs), like gas stations and restaurants, so that they pop up corresponding icons; in this case, a gas tank and a hamburger icon, respectively. What’s better, you can choose which POIs you want displayed with a simple tap of the screen.

Below the media controls, the Genesis Coupe adds a little sport-inspired tech in the form of three gauges that display torque readout (psi in the turbocharged versions), fuel economy, and oil temperature. While these displays add an even sportier vibe to the cabin, they end up being nothing more than superficial showpieces, as you can’t actually see them while driving.

Rounding out the tech package in our Genesis Coupe is Hyundai’s Bluelink telematics system, which features voice-activated searches, texting, and turn-by-turn navigation. Overall it’s a very robust amount of techy goodness, and really makes for one sweet sports coupe that doesn’t skimp on the comfort features, although we are rather disappointed by the lack of a rear-camera feature.

More than its tech features, what inevitably matters most for enthusiasts is what type of mill the rear-wheel drive Hyundai Genesis Coupe is rocking. Here, drivers get the choice of two different engines: a turbocharged 2.0-liter four-cylinder capable of making 274 horsepower and 275 pound-feet of torque, or a naturally aspirated 3.8-liter V6 that can pump out 348 hp and 295 lb-ft of torque.

As mentioned, our review unit was the 3.8 Track trim mated to an eight-speed automatic transmission, though a six-speed manual is also available.

Seeing as how the Genesis Coupe is a sports car first, we wanted to test its chops off the blocks. During our road testing we found it was capable of sprinting from zero to 60 mph in about 5.4 seconds. For a brief comparison, the 2013 Ford Mustang with a 3.7-liter V6 can make the jump to 60 in about 5.6 seconds.

Despite its power delivery, the Genesis Coupe is surprisingly frugal with its fuel consumption. EPA-estimated returns for the 2.0-turbo is 21 mpg city, 30 mpg highway, and 24 mpg combine with the six-speed manual, while those numbers change ever so slightly to 20/31/24 with the automatic. Step up to the 3.8-liter with a manual transmission and naturally those numbers dip to 18/27/21, while the eight-speed automatic nets a respectable 18/28/22.

A sports car for two worlds

Whether you’re on the road or out on the track, the Genesis Coupe manages to be both practical and punchy thanks to responsive hydraulic steering and finely-tuned suspension. Hyundai has incorporated into the 2013 model a five-link independent rear and dual-link MacPherson strut front suspension that provides excellent handling coupled with more manageable body control over rough surfaces. Indeed, handling can feel brutish at first, especially during low speeds, but it evens out once you get accustomed to the car’s driving dynamics.

During our road time, we found the Genesis Coupe was more than capable of absorbing some of the more arduous corners we ran it through. More importantly, it did so without losing its composure.

For drivers that enjoy a bit of auditory pleasure from their engines, Hyundai has added a soundbox system that channels engine noise into the cabin. It definitely gives the Genesis Coupe more bark on the road, but we’re not sure everyone will take to it. Thankfully, it only pipes in during hard acceleration thrusts and remains quiet when cruising.

Inevitably, there are those out there who will scoff at the very existence of the Genesis Coupe. It might not possess the pedigree of cars like the Ford Mustang or Chevy Camaro, but it’s fun to drive, comfortable, and packs an excellent assortment of tech features. Plus, a lot of credit has to be given to Hyundai for even building the thing.

Still, we don’t review cars based on good intentions. And simply put, the Hyundai Genesis isn’t quite there yet. It might provide a greater deal of practicality and serve as a better daily driver than, say, a Chevy Camaro. But cross shop with a new Mustang, which carries a lower base price of $22,000 — the base price for the 2.0-liter turbo Genesis Coupe starts at $24,250, while our fully-loaded 3.8-liter V6 Track Trim shoots up to just north of $35,000 — slightly better fuel economy with the V6 version netting 19/31/23/, bigger cargo space (12.3 cubic feet), and you’re left with some tough decisions. Besides, who buys sports cars because they are practical? Exactly, nobody.

For what it’s worth, the 2013 Genesis Coupe is a fun departure from what we have come to expect from Hyundai, and a welcome improvement over previous iterations. It might be unfair to say, but Hyundai still has an uphill battle against the more established models — and we haven’t even mentioned the cheaper, more dedicated Subaru BRZ and Scion FR-S sports coupes, which should also make things interesting in the rear-wheel sport coupe segment. With pony cars still synonymous with American manufacturers, it’s going to be some time before the Genesis Coupe is truly considered on the same level — unless it can pull off something spectacular in the future.