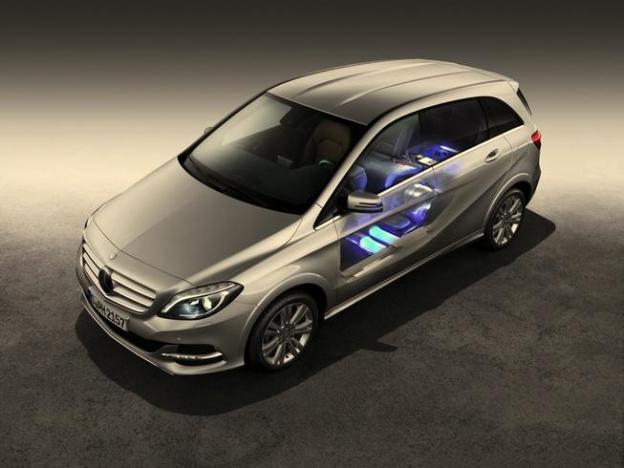 Natural gas is being touted as a green alternative fuel even though, like hydrogen and ethanol, supplies are limited. Mercedes-Benz obviously hopes hydraulic fracturing keeps happening, because the German company will introduce a natural gas-powered B-Class hatchback at this month’s Paris Motor Show.

The B200 Natural Gas Drive looks the same as a gasoline-powered B-Class, and that’s because Mercedes did not have to make many modifications to get the car to run on natural gas.

The B-Class is built on Mercedes’ new Energy Space modular platform, so its German engineers were able to squeeze a large main fuel tank, along with two smaller tanks, in the area under the rear seats. Natural gas is kept under pressure, so the tanks that hold it are usually bigger than the ones in conventional cars.

However, with the B200 NGD, Mercedes was able to fit 33 gallons of storage space into the car without sacrificing rear seat space.

Small alternative fuel hatchback aren’t supposed to be about speed, though. People will buy the B200 NGD because it achieves better fuel mileage than its gasoline or diesel counterparts, and pumps fewer carbon emissions into the air.

Unfortunately, potential buyers will have to wait for the B200 NGD’s Paris debut for fuel economy numbers. Mercedes did say that the NGD will cost 50 percent less per kilometer to run than a conventional car, partly due to the B200’s fuel economy, and partly due to the low cost of natural gas in Europe.

The B-Class will be coming to the United States, but the B200 NGD will not. Mercedes wants to concentrate on hybrids and diesels in the U.S., and possibly the B-Class EV reportedly being developed by Tesla Motors.

Natural gas is popular with fleet operators in the United States, because they don’t have to worry about finding a filling station. Currently, Honda sells a natural gas-powered Civic in the U.S., while Chevrolet, GMC, and Ram sell pickups that can run on either natural gas or conventional fuels.

Topics
Are EVs more expensive than gas cars? It’s complicated
We tested the self-driving Mercedes tech so advanced, it’s not allowed in the U.S.
We drove Mercedes’ hand-built EQXX concept, and it’s unlike any other EV
2022 Mercedes-Benz EQB first drive review: An EV better than its gas sibling
Uber says it’s investigating ‘cybersecurity incident’
Nvidia’s Drive Concierge will fill your car with screens
The Uber hack is an outrageous tale of a teen hacking for fun
Tesla to fix window software on 1M of its U.S. cars
Lux and refreshingly livable, Mercedes’ EQE moves EVs mainstream
How to watch Tesla’s AI Day tonight and what to expect
2023 Audi Q4 E-Tron first drive: the predictable and traditional EV SUV we need
We need more 7-passenger EVs, but the 2023 Mercedes EQS SUV has room to improve
Tesla AI Day 2022: Optimus, self driving cars, and everything else announced