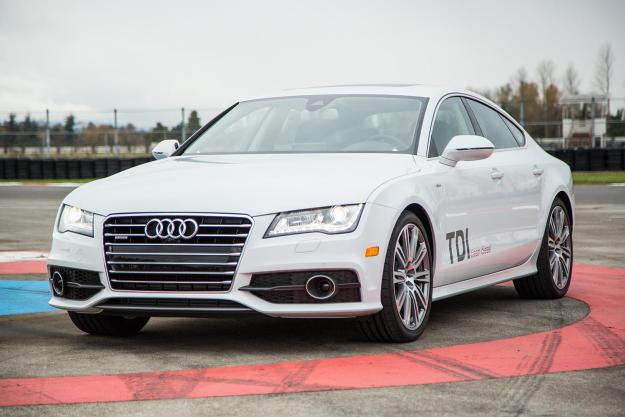 I’ll admit it; I did actually wonder if driving the Audi R8 V10 – although a dream come true – would ruin me.

Over the week I had it, I grew accustomed to its performance and feel. By the end of the week, like with all my test cars, it felt normal.

Settling into the A7 from the R8 wasn’t the jarring experience I had feared it would be.

When Audi took the R8 away, I was left with the white 2014 A7 TDI that you see above. As I strolled through the office the day swap, my colleagues would come up and ask, “Do you think you’ve gotten used to supercars now?”

“Oh naw,” I’d cavalierly explain. “It’s my job to separate supercars from regular consumer family haulers. Different cars can live in two different worlds for me. I can evaluate against one another and then compare everyday cars separately.”

Climbing behind the wheel of the A7 seemed to set my theory in stone. “This is a nice, comfortable, economical family sedan,” I thought as I surveyed my surroundings. And, by all rights, it is.

Audi recently put out a press release stating that – according to its findings – Americans would rather have a diesel-powered car than a hybrid. While Audi has a vested interest in this answer, I have to anecdotally agree.

For me, the clunky unevenness of a hybrid is unacceptable. Sure, they’re getting smoother by the year. For now, though, you couldn’t pay me to drive a hybrid.

Diesel, however, I am all for – and the A7 is a perfect example of why. The A7 TDI is powered by a 3.0-liter turbocharged V6 diesel engine that makes 240 horsepower and 428 pound-feet of torque. This little diesel torque box is mated to an eight-speed Tiptronic transmission that sends power to all four wheels through Audi’s quattro all-wheel drive.

Impressively, the A7 TDI is rated by the EPA to achieve 24 mpg city, 38 highway, with a combined score of 29. Yes, admittedly, these aren’t outrageously impressive figures. But the number parade isn’t over yet.

While hybrids add weight and drivetrain disturbance, not to mention the unforeseen ecological costs of the onboard batteries, diesels are light, smooth, and peppy. And once you’ve turned diesel into forward momentum, you don’t have to again worry about what horrid things are being scoured from the Earth to propel your car.

Settling into the A7 from the R8 wasn’t the jarring experience I had feared it would be. This specific A7 TDI was fitted with a slew of extra packages, including a 20-inch Sport package, adaptive cruise control, and the Bang & Olufsen Advanced Sound System.

My favorite of all, however, was the wood trim. It’s a dark, ruddy wood that is finished in a semi-gloss that is nearly closer to matte than anything else. But it still has a slight shine to it. Regardless, it’s the best wood trim in the automotive industry under $200,000.

… my passengers, unless they looked up from their smartphones, never noticed me driving like a lunatic.

The comfortable, brilliant-looking interior, coupled with a bumpin’ sound system, made the switch from world-class supercar to four-door eco-friendly family sedan that much easier.

Despite being humongous and quick, the A7 is also a great handling machine, too. I am used to experiencing understeer in big Audis. In the A7, I didn’t feel any. High-speed corners were executed with grace. It’s so smooth, in fact, my passengers, unless they looked up from their smartphones, never noticed me driving like a lunatic.

Since I still had leftover driving vigor rushing through my veins from the R8, the A7 didn’t let me down. I mean, it did, but it eased me off the driving edge and allowed me to relax while also getting a bit sporty.

It was the perfect cool down from supercar back to reality.

At least, that’s what I thought was happening.

Behind the wheel of the A7 TDI, I felt like a normal family man – despite not having a wife or kids. I felt responsible. I didn’t have the flashiest, the most refined, or the fastest full-size sedan. Instead, I imagined – if I had bought this car – I had gone for practicality.

The A7’s hatchback allows owners to haul many things. Its TDI engine allows them to be good not only to their wallets but also to polar bear cubs. At the same time, however, drivers can enjoy all-weather capability thanks to the quattro system. And with the A7 they can cocoon their friends and loved ones in safety and top-notch materials.

“It’s a smart, frugal decision, this,” I thought to myself. “Yes, the A7 is the perfect sedan for the man who’s willing to sacrifice a bit for practicality.” I nodded.

A few weeks have gone by since my time with the A7 TDI. Unlike other cars I’ve driven, it has stuck with me. Despite its exorbitant price – the base A7 TDI is only $66,900 by the way – I felt really at home in the A7 TDI.

Is it the eco-friendly family hauler I thought it was? No. Is it an absolute high-end diesel-powered gem? Yes. Mostly, though, I just miss that wood trim. God, it was gorgeous.