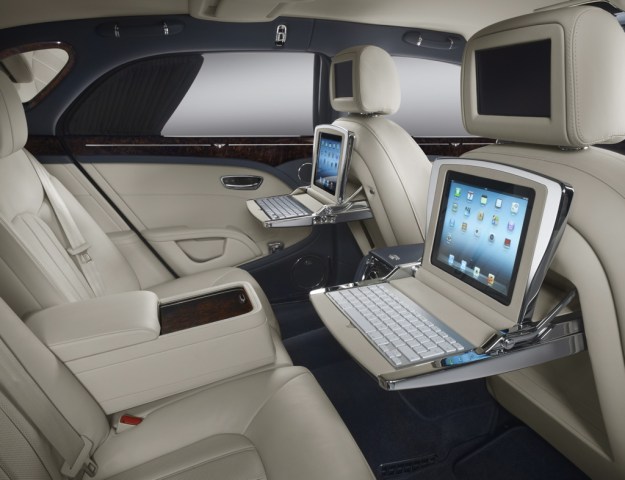 The Bentley Mulsanne joined the ultra-luxury party in 2010, but its maker is already planning a few updates for the 2014 model year. The updated Mulsanne will keep its old school looks and 6.7-liter V8, but it will gain some extra tech.

In a fitting move for a car large enough to have its own zip code, the Mulsanne is now a rolling Wi-Fi hotspot. Bentley says the router can handle up to eight devices at once. The antenna is mounted in the trunk lid, outside the car’s steel frame, which Bentley says boosts signal strength. Wi-Fi is already an option on less expensive cars like the Audi A4, but this is the first time it is being offered in a big Bentley.

A new Entertainment Specification gives passengers plenty of ways to enjoy that enhanced signal. Rear seat passengers get twin eight-inch LCD screens mounted in the backs of the front headrests, along with a DVD player, 20-GB hard drive, and “Naim for Bentley” sound system. It’s all controlled through one remote, and comes with a pair of Bluetooth headphones to keep the driver and front passenger from feeling left out.

The 2014 Mulsanne also comes with some extra furniture: rear picnic tables made from solid metal and trimmed in veneer and hide. They’re exactly the kind of hand-crafted pieces one would expect from Bentley, but they come with a 21st century twist. At the touch of a button, they open to reveal slots for an iPad and keyboard.

The changes aren’t limited to tech, though. The Comfort Specification adds adjustable headrests for the rear seats, “loose cushions” (pillows?), and footrests. Since many Bentley owners have chauffeurs, its not surprising that Crewe put so much effort into rear passenger comfort.

Rear passenger privacy is addressed too. Privacy curtains, covering the rear window and doors, are now a factory option. It’s a one-touch system that can be operated from the driver’s seat or the rear console, and should help owners conduct economy-destabilizing business deals without attracting attention.

Buyers can also opt for a six-piece luggage set, designed to look like the Mulsanne’s inner door panels and featuring an exterior frame that completes the illusion. The bags can also be color-matched to the car’s interior trim.

Bentley did a lot to make the 2014 Mulsanne more luxurious and more connected, but nothing mechanical was touched. the updated car retains Bentley’s signature 6.7-liter V8, which produces 505 horsepower and 752 pound-feet of torque. That’s enough to get this 5,676-pound sedan to 60 mph in 5.1 seconds, and on to a top speed of 184 mph.

The 2014 Mulsanne will make its public debut at the Geneva Motor Show in March, and Bentley will start taking orders in April. Pricing hasn’t been announced, but with 2013 Mulsannes starting at $302,425, the 2014 probably won’t be cheap.