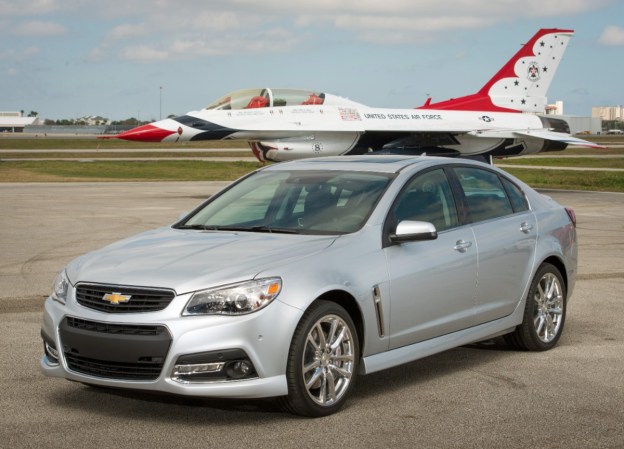 The car has gotten a lot more high tech since a true stock car last raced at Daytona International Speedway, but Chevrolet is betting there are still a few enthusiasts out there who live by the mantra “there’s no replacement for displacement.” The 2014 Chevrolet SS, unveiled at Daytona over the weekend, marks the brand’s return to old-school, rear-wheel drive V8 performance.

The SS picks up where the departed Pontiac G8 GXP left off, leveraging General Motors’ Australian Holden division’s Commodore sedan platform. The Chevy is almost identical to the Holden VF Commodore, and shares many bits with the Caprice Police Patrol Vehicle and Camaro.

Under the hood is a 6.2-liter LS3 V8, which produces 415 horsepower and 415 pound-feet of torque. The only available transmission is a six-speed automatic with paddle shifters. Chevy says the SS will accelerate from 0 to 60 mph in “about five seconds,” not bad for a full-size four-door.

The other important part of the SS equation is rear-wheel drive. It helps the chassis to cope with those 415 horses without apocalyptic torque steer, and allows for some sideways fun.

A MacPherson strut front and independent multilink rear suspension, along with Brembo brakes should also provide a sporty ride. Chevy says the SS has an ideal 50/50 weight distribution, and a low center of gravity, thanks in part to a lightweight aluminum hood and rear decklid.

Since the SS is a big sedan, there are also plenty of creature comforts. The cabin comes trimmed in leather, and Chevy’s MyLink infotainment system is standard. Other standard equipment includes a Bose nine-speaker audio system, a color head-up display, and a rearview camera.

The 2014 SS will also be the first Chevy to get Automatic Parking Assist. Like other automatic parking systems available from Ford, Toyota, etc., Chevy’s allows a driver to back in or parallel park without touching the wheel. The car picks the spot and does the steering, while the driver controls speed with the throttle and brakes.

With its big V8 and practical sedan body, the SS is essentially a modern muscle car. That’s why it wears one of Chevy’s most hallowed nameplates. SS, or Super Sport, was the name applied to the Bow Tie’s performance models back in the muscle car heyday.

Back then, buyers looking for such a car had more choices. Today, the SS’ only real rivals are the Chrysler 300 SRT8 and Dodge Charger SRT8 twins. Both come with 6.4-liter Hemi V8s, with 470 horsepower and 470 pound-feet of torque.

While the SS is handsome, it’s also not quite as good to look at as the more extroverted Dodge and Chrysler.

The SS will go on sale later this year, and Chevy will announce pricing closer to the on-sale date. Considering that it will be somewhat of a niche product (Chevy has the Impala for buyers who don’t have gasoline in their veins), it will probably be affordable but not cheap. A base 300 SRT8 Core starts at $44,900, while a Charger SRT8 Super Bee starts at $42,990.

Fuel-sipping turbocharged four-cylinders are great, but once in awhile it’s nice to indulge in some big-bore American performance. Chevy and Chrysler have got the idea, so maybe Ford will come up with something to complete the set.

Future cars: The best upcoming cars worth waiting for