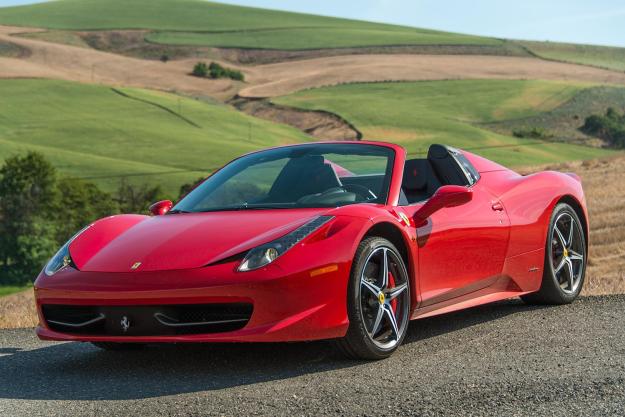 “All too often, driving a supercar is a beautiful chore. Delightfully, however, Ferrari has taken the work out of enjoying a drop-top supercar with its 2014 458 Spider.”

What’s it like to pilot 558 furious Italian horses? Get as close to behind the wheel as you can (from behind a computer screen) with our in-depth, interactive look at the Ferrari 458 spider.

As a child, staring at poster of a Lamborghini on the wall, I imagined how wondrous it might be to drive a supercar. Finally having the chance some 24 years later, I was surprised to find most are extremely difficult to drive.

Yes, cars like the Noble M400 or the Nissan GT-R or the Mercedes-Benz SLS AMG Black Series are gorgeous cars — and have more power than all of North Korea. But stunning looks and overwhelming brute force don’t a brilliant car make.

Take the SLS Black for example. It starts around the $230,000 mark. For that money, buyers get 622 horsepower, gull wings, gobs of carbon fiber, and a 0 to 60 time of 3.5 seconds. These all sound pretty good, that is, until it’s put into practice.

The SLS Black with all its front-engine power sent to the rear wheels is just as keen to spin the driver around and chuck him into a wall, sending him home to Jesus, as it is to stand still and look like a long, sleek, high-cheek-boned super model. By that, I mean the SLS is gorgeous but also a bear to drive. Just because a man can afford it, doesn’t mean he’d want to drive it.

This stunning but hard-to-drive problem isn’t true of all supercars. No, there is at least one that is both beautiful to behold but also beautiful to drive. It’s the 2014 Ferrari 458 Spider. And it might be the best car I’ve ever driven.

The name of the Ferrari 458 is derived from its engine. And – oh – what an engine it is. Ferrari engineers have blessed this beauty with a 4.5-liter naturally aspirated V8 that produces 558 horsepower and 398 pound-feet of torque — hence the 458 name: 4.5-liter V8.

The 458 Spider will rush to 60 from a dead standstill in just under 3.4 seconds.

The power generated by this reasonably sized V8 is routed to the rear wheels through an F1 seven-speed dual-clutch transmission. All told, the 458 Spider will rush to 60 from a dead standstill in just under 3.4 seconds and onto a top speed of 202 mph.

Those numbers are impressive, sure. But numbers don’t really say much; they don’t prepare you for the savage acceleration. And it is certainly savage. Cars like the 707-hp Dodge Hellcat, for example, can’t hold a candle to the 458 Spider, in terms of accelerative forces. That’s because, while the Hellcat weighs 4,500 pounds, the 458 only weighs 3,153. Couple with that a shout-y Italian V8 that revs to 9,000 rpm and the result is a sensation that feels less like driving a car but more like falling into a black hole.

Let the sun shine in

The 458 Spider, with the roof closed, looks like an innocuous Ferrari; it’s a sleek-looking racecar for the road. Open the top, however, and things change drastically.

In just 14 seconds – the time it takes for the hard top to fold away into the back of the car – the 458 Spider is reshaped. Not only is it far less serious looking — in a good way — but it’s also now the first mid-rear-engine supercar with a hardtop-folding roof.

This means that buyers, when it begins to drizzle or the sun begins to get a bit too hot, don’t have to get out and fiddle with assembling a pop tent over their $300,00 supercar, like one might with a Lamborghini Aventador Roadster. Nor do they have to suffer the finger pinching torture of fitting a carbon fiber sledge, like with a Pagani Zonda.

If not already sold with the mid-rear engine hardtop convertible concept, consider this: the 458 Spider’s roof is 55 pounds lighter than a folding soft top and 88 pounds lighter than the standard fixed hardtop. That means that not only is ease of use greatly improved and on-road auditory enjoyment, so, too, is rigidity and handling.

One might expect the 458’s shining attribute to be its acceleration. And in some ways, they’d be right. I dare say, however, it’s the cornering which takes the 458 from special to remarkable.

Unlike, say, a Subaru WRX STI, Ferrari doesn’t give any technical handling claims. Such a thing, after all, would be very un-Italian. It’s in no way sexy. Accordingly, I can’t regale you with stats of turn in or lateral g force. Instead, I’ll have to paint a handling picture.

The 458’s suspension is 35 percent stiffer and the steering 30 percent more direct than the F430 it replaces.

The 458 Spider is capable of taking corners much, much faster than the brain might think possible or safe. Unlike other cars on the market, the forces aren’t transferred to the driver or passengers in a spine-contorting way. Instead, the car stays level and planted and simply sails through corners without a second thought.

There’s good reason for this. The 458’s suspension is 35 percent stiffer and the steering 30 percent more direct than the F430 it replaces. That’s like making Kim Jong Un 30 percent more unstable: almost impossible to fathom.

Then there’s the steering, which is nearly perfection. The ratio is very quick. But it’s not too quick. A driver can still sneeze without worrying about going off the road. The feel is heavy but not so heavy that drivers will need to do a kettle bell workout for six months before purchasing the car. On top of all that, it’s twitchy and responsive.

Unlike other $300,000-some supercars currently on the market, like the McLaren 650S or the Lamborghini Huracan, Ferrari designers have not complicated the dash with a large, centralized infotainment screen, which not only ruins the lines of the dashboard but also draws attention away from the road to the center stack.

Ferrari did things differently. It’s flanked the centralized tachometer with not one but two screens, which display navigation, media, and vehicle information, including tire temperature, all of which can be easily toggled through with two knobs, which, again, flank the cluster.

Some reviewers have complained of this setup. Personally, I found it extremely use friendly and effective. Passengers can see the screens, for to media and navigation purposes, while the driver can easily monitor all essentials without looking away from the road ahead.

Moving the screens slightly to the left might not seem like much of a benefit. At first, I agreed. Then when I buried my throttle into the 458 Spider, I realized how essential it is. The earth rips past the car so rapidly that the driver must constantly keep all attention facing forward. There really is no time for a wayward glance.

The form of the 458 Spider got my heart racing just upon first glance. While undeniably beautiful – amazingly – it’s a departure from its predecessors. Not only is it better looking than the F430, it’s also much more composed.

The earth rips past the car so rapidly that the driver must constantly keep all attention facing forward.

Pininfarina, the Italian design house that penned the 458 Spider created something rather remarkable. Not only is the body beautiful, it’s also hugely functional. The body routes air around the car. It’s slippery where it needs to be and then grippy elsewhere. For example, the mustache-looking winglets in the front of the car deform at speed to route air more effectively to the radiators but also increase downforce.

And the body creates a lot of downforce. At around 125 mph, for example, the body generates 308 pounds of downforce, which keeps the 458 planted to the pavement.

Further proving Pininfarina’s mastery of both form and function, the body routes air into the rear-mounted radiators and then out into the slip stream behind the car. The resulting hot air, rather than disrupt the car’s natural silkiness at speed instead improves it, reducing drag. It’s simply astonishing.

I am sure you – like me – expected nothing but perfection from the 458 Spider. Amazingly, we’ve not been disappointed.

The Ferrari men have created a car that is fast, breathtaking to look at, and also brilliant to drive. Importantly, though, it’s also livable. Unlike its competitors It won’t try to kill you at every turn.

The 458 Spider is just as easy to drive as a Volkswagen Golf, as enjoyable as a Bentley Continental GT Speed Convertible, and as stylish as the SLS AMG Black — which is really, really stylish. Where the rest of those cars fall flat in any number of ways, the 458 Spider stands tall as the pinnacle of carmaking.