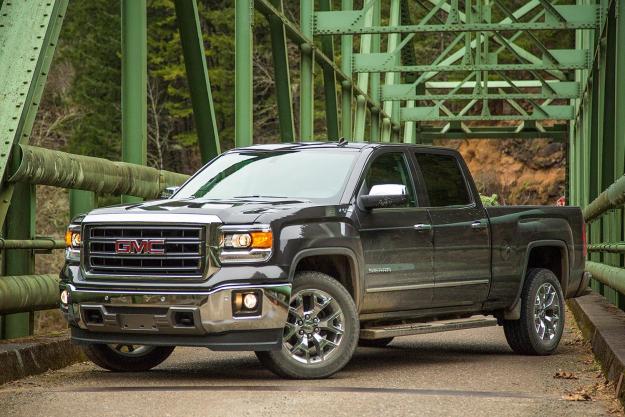 “The 2014 GMC Sierra impresses with the most efficient V8 in a pickup, a serene interior, and new long-lasting brakes to beat the band.”

“How about this one?” I hollered through the woods.

“Where?” my buddy Peter yelled back from somewhere to my right.

“Here!” I responded, without any better way to describe my exact location.

As Peter trudged his way through the thick underbrush, wild rhododendrons, and crowded bunching of teenage trees, I glared up into the 12-foot-tall Douglas fir standing proud before me that was handsomely backlit by the grey Oregon sky.

“Oh nice one,” Peter said as he entered the small clearing, hopping a rotting log with my coonhound, Ruger, in tow.

“You hold Ruger back and I fall it … fell it? Fall it?” I asked Peter, furrowing my brow.

“Either way, I’ll cut it down,” I said, I bending down to the chainsaw at my feet. I grabbed the pull chord and yanked. It fired with an uninspiring chug. I picked it up, gave it a few revs and aimed for the trunk.

Believe it or not, GMC has been around for 111 years. As the slightly more upscale version of the Chevrolet truck line, GMC has made some pretty enjoyable trucks over the years. None, however, has been on the level of utility and refinement as the 2014 GMC Sierra.

If you’re thinking the EcoTec3 engines are the same as the EcoTec2s but with some efficiency-boosting technologies bolted on, don’t. Although the new engines have the same displacement as the old units, they’re new and boast features like variable valve timing and direct fuel injection. Yes, the V8s are still old-style pushrod units, like that in the Corvette Stingray, but GM assures me, they are truly new.

To prove that point, let’s look at the fuel economy of these powerplants. The V6 is rated at 18 city and 24 highway. The 5.3 is pegged at 16 city and 23 highway – the best V8 fuel economy of any pickup truck on the market (including Ford’s EcoBoost V6). And lastly, the powerhouse 6.2-liter is estimated at 15 city and 21 highway.

Ram and Ford have had to resort to trickery to eke out moderate efficiency improvements with turbochargers and air suspension. General Motors dug deep and designed aerodynamic bodies and focused in on efficient normally aspirated engines.

While it’d be unfair for me to speak to the longevity of the Ram and Ford’s fuel-saving solutions, I suspect they won’t be as durable and long lasting as GMC’s. Not only is the Sierra more efficient, it’s also simpler – at least where it counts.

City slickers with a truck

The day after Thanksgiving, sitting in my downtown apartment, I found myself without anything to do. Looking around my place, I was struck with an idea. “Why not use the Sierra to go get a Christmas tree?” I thought.

I turned the four-wheel drive knob over to 4×4 and gunned it, like a real American should.

I strapped on some boots and loaded my dog and a chainsaw into the truck and headed to Peter’s house.

In Oregon, you’re allowed to cut down your own Christmas tree in Mt. Hood National Forest on former clear-cut land. That is, if you buy a $5 permit first.

After Peter showed me the way to the ranger station, we headed up a narrow, paved road that winded its way up into the mountains.

“This road isn’t too bad,” I cheerfully said to Peter.

“Yeah, it gets worse,” Peter admitted. “Mind if I put something on?”

Peter pulled out his iPhone, which we had Bluetoothed to the virtually flawless Chevrolet MyLink system, and Dave Dudley’s “Six Days on the Road” blared from the speakers.

We nodded to the simplistic 1960s country music beat as I rounded a corner hot. Just then, the pavement ended and we hit some massive, muddy ruts.

I turned the four-wheel drive knob over to 4×4 and gunned it, like a real American should.

On the highway en route to the ranger station, Peter rooted around in the voluminous cabin, discovering just how many places the GMC designers had made for things.

GM interiors have always been cavernous, at least in the trucks. Well built and sturdy, though? Not so much. I was delighted to see the all-new 2014 Sierra didn’t follow that pattern.

Being the gadget-loving guys were are, though, we plugged in an iPad, and iPhone, and a couple other toys – all without shorting the system.

Everything is made from sturdy grey plastic, which was surprising aesthetically pleasing and trimmed with wood. There are a slew of power outlets in both wall socket form but also in traditional cigarette lighter form as well. Plus, GMC had fitted several USB lots in addition.

Clearly, the thing was designed for contractors. Being the gadget-loving guys were are, though, we plugged in an iPad, and iPhone, and a couple other toys.

The most impressive bit of all, though, was the sereneness of the interior. GMC designers tucked the doors under the roofline, instead of protruding up into the roof. This slight adjustment in door height has transformed the cabin, making it feel much more premium – at least from a white noise standpoint.

Improved, too, is the ride quality. On the highway, the Sierra doesn’t float but rather just irons out the bumps. It’s neither hard nor squishy like its competitors or predecessors.

Fun in the dirt

The dirt road was a bit jarring but it was also a bit of an acid test for the Sierra. The washboard bits gave me a chance to test its steering. For 2014, GMC has switch the power steering from a hydraulic unit over to electronic. Certainly, it’s more efficient this way, but the new system has virtually no feel. You turn the wheel, and the wheels turn. But that’s all you feel, the car moving in a direction.

GMC is mighty proud of its new brakes, but if I’m honest, the brakes in the last-gen Sierra were scary.

The new brakes are called Duralife and are expected to last twice as long as conventional brakes. Whether that’s true or not, I don’t now. What I do know, though, is that when that hillbilly came flying out of the woods on a blind corner in a 1949 Jeep, the Sierra came to a quick and confident stop.

Finding the tree and cutting it down, it turns out, is the easy part.

I trimmed the tree of its lower limbs a bit, and realized – to my dismay – that we had to hike the thing the half-mile or so back up the hill to the truck, through that thick underbrush. After much swearing, stumbling, and sweating, we made it back to the Sierra, our faces scraped by the other trees, which were probably exacting revenge upon us for their fallen brother.

I lowered the EZ Lift tailgate, which is a new technology that eases the tailgate open with an integrated torsion bar and damper. We tossed the tree in, loaded Ruger and the chainsaw, and got back on the road.

After we rejoined the highway, I had myself a good think on the GMC Sierra. Until that point, I had been a devotee of the new Ram 1500, with its dramatic and masculine bodylines, plucky V6, air suspension, and killer Uconnect infotainment system. The Ram’s interior certainly bested the $48,895 2014 Sierra. But the GMC has the Ram beat in every other way. And what about the best-selling F-150? For my money, it’s too old to even count. The Sierra is a bit less showy than the Ram. It’s luxurious without being a luxury truck. It’s efficient without making too many concessions.