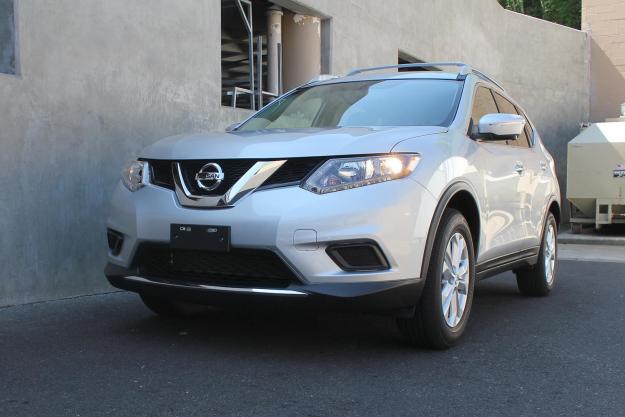 “The Nissan Rogue may not be the world's most exciting car, but it is one of the cheapest ways to seat seven people, and still come away with a quality product.”

“What am I driving again?” I mumbled to myself, as I drove home on my second day with the Nissan Rogue. A totally forgettable driving experience was not a promising beginning to the week – or this review – but fortunately for me, and Nissan, the Rogue has a lot else to offer. The Rogue lacks the driving excitement of some of its competitors, but it is a stylish, capacious, practical, and surprisingly affordable way to transport seven people … or 126.5 cubic-feet of sandwiches. For a $28,000 crossover, those are the qualities that actually matter, particularly when most of the drivers are going to be too busy yelling at their kids to pay attention to a car’s personality.

The previous version of the Rogue always looked a bit like it was wearing a particularly medieval form of braces. But the new edition is all grown up, and quite good-looking. The nasty grille is gone, replaced with a bold chrome “V” that unlike other chrome beaks (I am looking at you Acura) manages to be both eye catching and tasteful. The chrome nose and the LED running lights taken together give the Rogue a surprising amount of presence of a family car, but also don’t make the car look like it is trying too hard.

Once past the front end, the Rogue does get a bit more forgettable. It has a nice, high-waisted crease that gives the side profile some interest, but ultimately there isn’t much Nissan’s designers could do to hide the fact that the most practical shape for a crossover is a box on top of a larger box. The same too might be said of the interior, which is pleasant but mostly utilitarian, but for the tech.

One of the Rogue’s outstanding features is tech. The mostly loaded model I drove featured a touchscreen display with navigation, Bluetooth streaming, satellite radio, voice commands, and one of the best combinations of backup camera and parking guidance that I have seen short of a $100,000 Audi A8.

With the Rogue, buyers aren’t just getting space, for they money, they also get a quality product.

Unlike most systems that offer – at best – a front- and rear-facing camera, the Rogue uses a combination of technical wizardry and four cameras to give the driver what amounts to an overhead view of the vehicle. Front and rear cameras use a fisheye view to give the picture a 3D perspective, and cameras mounted under the wing mirrors display the view to the sides. Not only is this a fun gimmick, it is also extremely useful for parking the rather large Rogue. I found it especially handy when backing into spaces and parallel parking. The only flaw with the Rogue’s tech suite is its somewhat balky voice command system. It should be noted that few of these systems work well, but on the Rogue I ended up spending a long time staring at the screen, looking through menu trees to try and figure out what I could say than I did actually using it. Having to take my eyes of the road just to work the voice command system sort of defeats the purpose of having a voice command system, don’t you think?

The Rogue doesn’t impress just with it tech; it is also deceptively massive on the inside. Sliding into the driver seat, I felt like I had slipped into the Tardis. Despite its modestly sized exterior, the Rogue’s interior feels like it could come from a Chevy Tahoe. And it’s not just the driving position that delivers this sensation, because the rear seat and cargo area are huge.

If anything, it might have slightly more useful space than the Toyota 4Runner, an SUV I thought was as big as anyone could possibly need. In fact, there is more than enough space for three adults in the Rogue’s second row and two kids – or travel-sized adults – in the third.

Despite its many good qualities, the Rogue has one big problem: it just doesn’t drive that well. Don’t misunderstand me; it doesn’t drive badly, but it is completely without personality. In part, this is down to the underwhelming powertrain. The Rogue’s only engine and transmission combination is a 2.4-liter, 170-horsepower four-cylinder mated to a Continuously Variable Transmission (CVT). This paring is just barely sufficient to propel 3,413 pounds of Rogue down the road. And up a hill? Forget about it. You might as well get out and push – or get one of those gondola stick thingies.

The only flaw with the Rogue’s tech suite is its somewhat balky voice command system.

Unfortunately, thanks to the buzzy CVT, the sensation isn’t very impressive either. The transmission has programmed “shifts”, but, like so many imitation products, these only serve to remind you what you are missing out on. There is a sport button. Press it, though, and the only difference you’ll observe is a small green sport light in the instrument cluster. The tradeoff for this underwhelming power is surprisingly good fuel economy. The Rogue is rated to 33 mpg on the highway and 26 in the city mpg, an impressive mark for a seven-seater. Unfortunately, I was not able to get anywhere near that rating, though that may have been due to my efforts to try and get the Rogue to accelerate like a more powerful car. Fuel economy will also go down if the Rogue is fitted with all-wheel drive. However, given that this is a very basic system designed only to offer better traction at low speeds, this may not be a worthwhile tradeoff.

Personally, I love to drive. Any car – fast or slow – that connects me to the road and the driving process is always going to win my love. Due to its bland personality, the Rogue wasn’t able to do that. However, it did earn my respect. The Rogue is one of the cheapest ways to seat seven people. With the Rogue, buyers aren’t just getting space, for they money, they also get a quality product. For less than $30,000, it is available with nearly every feature a crossover buyer might want, thanks to its styling and some charisma. It would be a lot to ask for the Rogue to deliver driving excitement to boot. Nissan’s designers knew what was important when they designed the Rogue. Instead of making it OK at everything, they made it practical and saved on the dynamics. It may not be the compromise I would have made, but, in a segment defined by compromises, it was probably the right one to make.