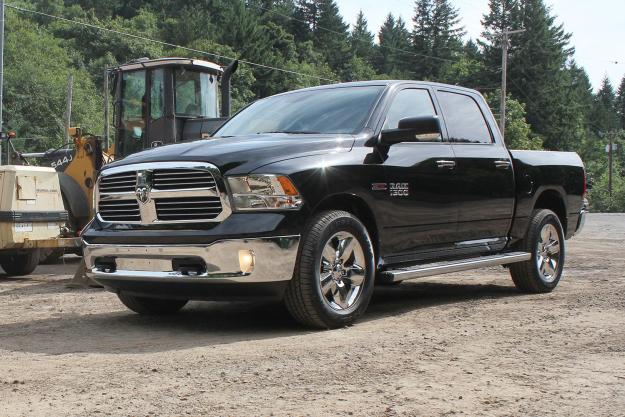 “It may have taken forever, but there is finally a light-duty diesel available in a full-size pickup, and thank goodness Ram managed to get it right.”

When the new Ram 1500 came out we, along with everyone else, were wowed by its high-tech active aerodynamics and impressive handling. But with the new and hugely efficient F-150 on its way, and GMC set to release its game-changing Colorado and Canyon diesel-powered mid-size trucks, Ram is on the back foot… but not for long.

The American automaker has just delivered a first for the truck market: a light-duty diesel powerplant. While the customer might have to pay out the ear to get it, it is worth it. The Ram 1500 EcoDiesel is a great engine in a great truck.

Almost from the first moment I fired up the Ram EcoDiesel, I was sold on the new motor. Turn the key and a basso rumble rises up through the floorboards, like a bus with an anger management problem.

The Ram 1500 EcoDiesel is a great engine in a great truck.

The source of this ominous growl is a 3.0-liter diesel equipped with a variable vane turbo. This mill may only be good for 240 horsepower, but the key numbers are torque and fuel economy … and these are rather impressive. The EcoDiesel churns out 420 meaty pound-feet of torque and a surprising 27 highway and 19 city mpg.

Amazingly, the Ram can actually live up to these numbers in practice. Over the week, I slightly undershot the city mileage, but easily achieved or exceeded the highway rating. Not too shabby for a truck that weighs an earthquake-causing 6,950 pounds.

On paper 240 hp and 420 lb-ft. seem like a lot. However, in practice, it feels like even more … at least, most of the time. Because of the EcoDiesel’s small displacement, turbo lag rears its ugly head. It’s not terrible, but at low rpms – and especially on hills – the EcoDiesel will hesitate a moment before taking off with a surge of freight train rage. Despite the lag, torque is there when needed, which means that in EcoDiesel trim the 1500 can tow 9,000 pounds – or nearly one whole Ram 2500.

Once at speed, the Ram is both powerful and smooth – in many ways more so than a gas powered V8. This smoothness is partially thanks to the excellent eight-speed transmission, which shifts quickly and intelligently to keep the diesel in its power band.

It’s a good thing too, because the diesel is a $4,000 option. If it were just the gas mileage it wouldn’t be worth it, but frankly I prefer its dynamics to a Hemi V8.

King of the road

Still, no matter how impressive the new engine is, it wouldn’t shine the way it does if it weren’t mounted to a very good truck.

The 1500 may be the Chrysler Group’s smallest truck, but it is still the size of a dreadnought. In fact, the thing is so big, I spent my entire week worried that Vladimir Putin would try and annex it.

Despite weighing more than two average family cars, the 1500 is remarkably nice to drive.

Squeezing an average of 22 mpg out of this leviathan requires more than a good powertrain. To massage that number up, Ram’s engineers have made use of more aerodynamic tricks than an average commercial airliner. The Ram uses a under-bumper diffuser and full length running boards to smooth airflow along the body. Shutters close behind the grille to reduce drag. And air suspension squats down on the highway to reduce the car’s brick-like height.

That air suspension doesn’t just improve aerodynamics either. It is clever enough to take a truck that weighs more than double most family cars and turns it into a docile, easy-to-drive highway cruiser. The ride is firm but comfortable and all the controls react quickly and precisely. It may not be a sports car, but the 1500 is nicer to drive than most crossovers. Plus, load the bed with, well, stuff, and the air springs level the ride out. Not only does this improve the aesthetics, but it also ensures the fuel economy isn’t ruined by deformed airflow.

The problem with all this on-road engineering is that it doesn’t extend into more rugged environments. Sure, there are some nods in that direction, like low-range, four-wheel drive, and skid plates protecting the transfer case and front suspension. But those aerodynamic and road handling improvements are a double-edged sword.

Take the splitter located under the bumper. It may be a great idea, but if the truck hits anything rough, it will be a good idea left on the side of the road. The same goes for the relatively low ride height. It is great for aerodynamics but it also means surprisingly little ground clearance. In short this truck is designed to master more highways than byways.

But in my book, that’s just fine. Most truck owners, including myself, rarely take our vehicles off-road, and when we do its on a boat-ramp or nasty gravel road. The Ram 1500 can still do these things, and it can absolutely crush a daily commute.

Uconnect but not much of it

There is also another cost to all those impressive engineering achievements: the actual cost. That means that by the time the $48,425 price has been added up, there isn’t that much room for in car tech.

The 1500 EcoDiesel Big Horn may come with one of the industry’s best infotainment systems, Uconnect, but on my vehicle it wasn’t actually able to do much.

I was hoping for navigation, satellite radio, adaptive cruise control and a set and forget climate control.

Specifically, the Big Horn Uconnect package gets Bluetooth connectivity for phone and audio, touch screen climate controls, and a reverse camera. All of these features work well and pairing a phone takes just two clicks.

However, for that amount of money, I was hoping for navigation, satellite radio, adaptive cruise control and a set and forget climate control rather than the old school temperature and fan controls.

The other Ram’s other features are pretty minimal, but at least the $595 reverse camera package includes parking sensors.

Even if the Ram 1500 Big Horn is hardly a panacea of tech for its price, it is at least very well thought out.

The interior is awash in charging ports and connectivity. The massive center console has a double-layered lid. The top layer has space for a tablet and two USB ports, including one that just charges and doesn’t connect to the head unit. A nice feature if the driver wants to plug something in without interfering with Bluetoothed devices.

The Ram 1500’s dash also includes something that I love and wish more automaker’s thought to include: a genuine three-prong 115-volt power outlet. This means no messing about with cigarette lighter adapters that can only be bought at Radio Shack or horrible truck stops. Instead, just use the plug that god intended.

Throw in a rear seat that is itself the size of a smart car, and the Ram is a surprisingly utilitarian, not to mention comfortable place to be.

The Ram 1500 EcoDiesel may cost a lot of money, too much money to be honest. However, it is still worth the price. The truck segment, like many areas in life, is about compromise. Having it all means paying for it.

The Ram 1500 EcoDiesel succeeds in delivering the important things, even if it isn’t quite perfect. The new diesel engine combines better fuel economy than all of the other automakers’ V6 offerings with the torque and tow capacity of a V8. And under most driving conditions, the 1500 simply blows most other trucks out of the water.

It may not be an off-road hero, but, as a practical truck that can tow a boat, or a trailer, and haul five adults in comfort, it is hard to beat … even if they may not have many buttons to press while they sit around.

The best news, however, is still to come: Ram won’t be alone in the light-duty diesel market for long. Nissan is bringing its own light-duty diesel to market this fall, and GM has its diesel Colorados and the Canyons. That means competition – and hopefully a lower price all around.