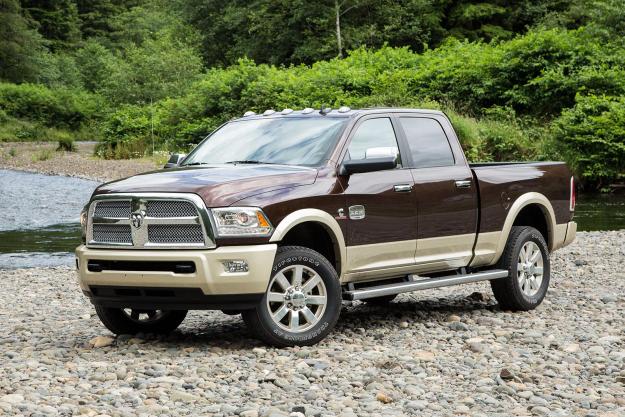 “The 2014 Ram 2500 4x4 Laramie Longhorn, especially with the Cummins turbo diesel engine, isn’t just a luxury truck fit for a country king, it’s also perhaps the best truck on the market that money can buy.”

Foot firmly buried in the throttle, I hurdled the 2014 Ram 2500 4×4 Laramie Longhorn up the North Oregon Coast range outside Tillamook, with my coonhound baying in pain from the backseat.

Flying past weekend warriors and RV-ists, I rallied the 10,000-pound truck through the mountain passes back toward Portland at breakneck speed. With each new corner, the tires wailed slightly louder than the last, nearly in harmony with the moans of my wounded dog. Driving a full-size truck literally at the limit, though undeniably unforgettable, was not how I envisioned my time with the diesel-burning leviathan.

This, however, was exactly where I found myself last Sunday. Before we get to the fishtailing truck and wounded coonhound, some background is required.

When the brown-and-tan two-tone, four-door Ram 2500 – complete with roof-mounted amber running lights – was delivered to my downtown apartment, I stood back in awe. I’d driven the then-new Ram 1500 in 2013, so I felt prepared to pilot the 2500. To my chagrin, the 1500 paled in comparison to its larger, heavy-duty big brother.

Delightfully, though a steel-clad colossus, the 2500 is still a rather handsome beast. The new 2500 is not only better to behold, it’s slipperier in the wind. The full-length running boards, for example, not only make the truck more accessible but also more aerodynamic. Ram designers were able to improve exterior styling and also improve airflow. And pushing a big, blocky truck around, the engine will need any assistance it can get … and what an engine it is.

Under the hood of my 2500 was an optional 6.7-liter Cummins turbo diesel inline six-cylinder. The solid block of iron, when injected with diesel, produces 385 horsepower and a simply staggering 850 pound-feet of torque. Ram now fits all 2500s with a six-speed automatic as standard; no manual is offered.

Though this American-bred diesel churner produces more torque than it takes for the moon to create the Earth’s tides, it’s still relatively efficient. Looking to the window sticker, though, won’t get you any firm fuel economy figures. Ram is quick to remind readers that full-size trucks do not require EPA efficiency testing. So, in place of mpg figures, buyers will find “N/A”. Anecdotally, I can confidently report the Cummins’ achieved an average of 18 mpg during my time with it.

Rear-wheel drive is the standard setup for the Ram 2500; mine, however, had been fitted with 4×4, which featured several settings, none of which I played with. The sunbaked Oregon tarmac left me with more than enough traction.

The interior of full-size trucks of the past have, well, lacked in refinement, let’s say. The Ram 2500 does not. Designers have added supple leather and real wood to the blocky yet well-shaped dash, creating a place fit for a country king.

I rallied the 10,000-pound truck through the mountain passes back toward Portland at breakneck speed.

Unlike Rams of old, the dashboard’s party piece is not just its plethora of cup holders and stowage bins but its 8.4-inch Uconnect touchscreen infotainment system. We’ve discussed it before in other Chrysler products, so I won’t bore you with the details. Suffice it to say Uconnect does more – more easily – than most any other system on the planet.

Cleverly, Uconnect was given a bit of a makeover, too. The color scheme of the Uconnect running on my 2014 Ram matched the interior color scheme of the truck. It’s likely not a detail most people will notice. But it’s an attention to detail little before seen inside the Ram.

If occupants are overwhelmed by the tech in the Uconnect system, they ought not look to the instrument cluster. Ram has fitted another color info screen there, too. Operated by steering wheel-mounted buttons, the driver can scroll through dozens of screens, relaying anything from transmission fluid temperature to which station is being streamed over satellite radio.

When my best friend and I set out on an afternoon fishing excursion, as city slickers, we aimed to embrace the full Ram lifestyle. Accordingly, we tuned in country radio and hit the road.

Our first stop was Wal-Mart. There, we bought a fishing reel, some bait, and a few sandwiches. We threw them all in the back of the Ram, along with my six-year-old Treeing Walker Coonhound, Ruger, and headed for Tillamook State Forest.

Over the previous week with the Ram, I had mostly wrestled with the Ram on the streets of downtown Portland. Thankfully, Ram had fitted the 2500 with extra convex side-view mirrors, allowing me to constantly keep an eye on the corners of the truck. Even with these, the truck was a bit of a headache to maneuver through town.

Getting out on the open road allowed me to unfurrow my brow a bit, as the Ram 2500 was most at home on the highway. I’ve owned and driven many full-size trucks over my life. Accordingly, I expected a certain set of driving dynamics from the Ram. Essentially, I expected it to handle like a sledgehammer with wheels. To my delight, it had a bit more cush than that.

Ruger especially enjoyed the Ram 2500, as he could stick his head out the side along the cab, ears flapping in the wind, enjoying a nose-full of fresh country air. Ruger has always reacted with great excitement to the sound of a healthy diesel engine. Maybe it’s in his blood. I don’t know. Either way, I could tell he was having a blast in the Ram.

Amusingly, the wood-trimmed steering wheel of the Laramie Longhorn is simply massive. With my hands at 10 and 2, I felt less like I was holding a stout steering wheel but rather massaging the shoulders of a gorilla.

When my friend, dog, and I got to the fishing spot, we drove across the river rocks to an ideal place at the water and unloaded.

As Ruger ran around the shoreline, my friend and I set up the fishing line, tied on a hook, slathered on some neon pink bait, and took turns casting into the water. After a half an hour or so without any bites, I decided to turn to my sandwich. I handed the pole to my friend and walked to the truck.

Though a steel-clad colossus, the 2500 is still a rather handsome beast.

I had gotten no more than a few feet away when I heard an ear-piercing yowl. Instantly, I knew my friend had accidentally hooked my dog. As I spun around, I saw the hook embedded in Ruger’s left rear leg. Before he could run off, I grabbed him and tried to pull the hook out myself. This only served to add insult to Ruger’s injury.

In a bit of a panic and cloud of cursing, my friend and I threw Ruger into the back of the Ram and headed for the highway. Being Sunday, we knew no small-town vets would be open. Our best plan of action would be to find one in Portland, which was a solid hour-and-a-half away. In order to limit my pup’s suffering, I’d have to put the hammer down.

As we rejoined the highway, I mashed the throttle to the floor and found the ultimate way to test the driving capabilities of a full-size truck: consternation.

Putting the hammer down hard, I drove the Ram at both its and my limits. Amazingly, a Ram 2500 can take a mountain pass corner rated at 25 mph at around 70 before the tail begins to kick out.

In the rearview mirror, I could see Ruger being flung side to side in the back, fishing hook still firmly embedded in his leg. Figuring a healthy jostling outweighed the prolonged suffered caused by a leisurely driving pace, I kept the throttle wide open.

Oregon’s normally gorgeous green scenery and caravan RVs, as well as the highway’s dotted yellow lines, blurred in my periphery as we hurdled back toward Portland. The Ram 2500 stood strong. It drove more keenly – going hard and fast through the hills – than the GMC Sierra did even at a snail’s pace. I drove that truck harder than I would most any vehicle in those conditions and it never acted up or underperformed.

Ruger’s wails notwithstanding, the Ram’s cabin was incredibly quiet. We had the A/C on full tilt, along with the cooled seats. Perhaps most amazingly – ignoring the sports car-like handling capabilities of the big truck – the 6.7-liter Cummins still held true at 18 mpg. It proves the resiliency of the powertrain: I reckon you could set your watch to that engine.

You’ll be happy to know that Ruger is fine and after an hour or so of discomfort, the vet was able to remove the hook without issue. It’s now mounted on the wall above my desk at home, next to pictures of the pup.

Despite our misadventure, I think that Ruger – like me – still holds a strong place for diesel trucks in his heart. And he couldn’t do any worse than to love the 2014 Ram 2500. It’s truly one of the best.