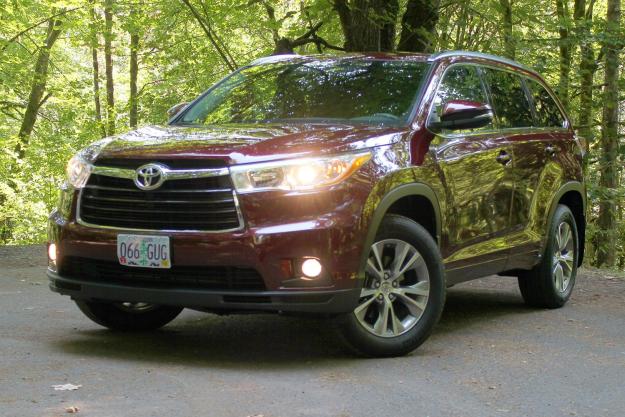 “No car advertised by the Muppets is going to make a gear-head swoon, but at least the Highlander will transport them in astonishingly practical comfort.”

I wanted to hate the Toyota Highlander. After all, I got into this business because I love cars that are the products of passion and extremes. And the Highlander couldn’t be more “mommy” if it were nine months pregnant. The thing is, though, after a week with the Highlander, I couldn’t hate it. To the contrary, I had to respect it.

The respect comes from the fact that Toyota managed to combine a bit of style and flair with oodles of practicality. The result is one of the best efforts I have seen at the always-difficult compromise between the deep uncool of minivans and the glaring inefficiency of SUVs. And at only around $40,000, I can almost call it a bargain.

Toyota’s battle to make the Highlander compelling started on the outside. Previous generations of Highlander were never ugly, but they also could have been dishwashers for all their designers seemed to care. The new Highlander may not be the pinnacle of automotive beauty, but it at least looks like the person who designed it understood what that is.

The front end has gotten the most radical treatment, with chrome eyebrows torn right from David Bowie’s face and a big butch grille from the Avalon. The result is a face that looks eerily like the Muppets that advertise it … but I still like it. Like Animal, it is aggressive but too cute to take seriously.

Even with the Muppet-y good looks, the Highlanders best angle is dead side on. With its big rims and sweptback stance, the Highlander borrows the best parts of Porsche and Jeep’s SUV design. It may not win a design award, but tired parents walking out to their Highlander in the morning will at least be reminded they have a soul.

Practicality with a side of soul

Step into the Highlander and that parent will probably forget they are riding in a Toyota. Especially on the higher end XLE and Limited trims, the Highlander looks a lot more like a Lexus than a practical family runabout. Still, those practical Toyota genes are at work.

The Highlander is one of the best combinations of luxury and practicality I have seen in a vehicle.

Leather abounds, and not just on the seats. The handsomely sculpted dash gets leather accents and highlight colors that give the Highlander’s driving position a surprisingly premium feel. Even the cargo shelf swoops along the dash like the side of a grand piano.

The interior isn’t just visually appealing either. Everything the driver touches feels like it is high quality. For instance, the leather on the shifter is just as nice as what can be found on an $80,000 Audi A8.

Heading back from the heated front seats – ventilation is available as an option – the interior stays classy but gets decidedly more robust and practical. The floor mats are all made of heavy-duty rubber that looks like it could shrug off a bullet to say nothing of spilled sodas and chip crumbs.

Also, because someone at Toyota actually has kids, or has at least heard of them, there is a convenient passage between the second row captain’s chairs that heads back to the third row. This means that actual human beings can access the third row, even if fully grown ones won’t really be able to sit in them.

Once a cargo of small humans is installed in the back they can be pacified with a flip down video screen. The parent in front won’t even have to interrupt their “best of” Fleetwood Mac to listen to Frozen’s soundtrack for the 1,794th time, because Toyota has thoughtfully included a pair of Bluetooth headphones synched to the video player.

In short, the Toyota Highlander’s interior is the complete family package: luxury and refinement for the parents, indestructible utility for the kids.

Entune: no better than it needs to be

Toyota’s Entune infotainment system will never be my favorite, but it has grown on me. The large 8.1-inch touchscreen available on the XLE and Limited models – the plebes have to make due with a mere 6.0 inches – is as good an example of the system as there is.

Its not as attractive as Audi’s MMI system, or as intuitive as Chrysler’s Uconnect, but it does everything anyone could want, and relatively simply. Pairing a phone takes just a few clicks, and hard buttons surrounding the screen provide access to all of the key features at any time.

Entune’s downfall is that it just doesn’t look that good. The graphics are somewhat crude, and the design contrasts badly with the classy interior of the Highlander.

But at least I could shout about it. Toyota has included a one-way PA system so that parents – and dictators alike – can scream amplified commands through the rear speakers. No longer will mild mannered parents be prevented from verbally abusing their progeny.

Wow, this is a Highlander?

Despite the shouting, what really won me over to the Highlander was how it drove. Toyota’s products all too often feel like they are so focused on the utility of getting from A to B that comfort and fun aren’t part of the bargain.

The Highlander may not be fun to drive exactly, but it is incredibly refined. My XLE press demonstrator came with Toyota’s excellent 3.5-liter 270-horsepower 248-pound-feet of torque V6. This engine, when paired to the absolutely supple six-speed transmission, provides effortless power under any condition.

This powertrain is pared with a nicely upmarket feeling suspension. The Highlander is no sports CUV, nor does it even pretend to come close, but it is level and flat under cornering and the steering gives the driver a good sense of connection to the road. Unlike other crossovers, like the admittedly much cheaper Nissan Rogue, driving the Highlander actually feels like driving, rather than operating a front-loading washer.

Unfortunately, there is a price to pay. To give the Highlander its SUV pretentions, Toyota had to raise it and fit a heavy all-wheel drive system. This means that the Highlander not only costs more than $40,000 in its XLE trim, it also gets 18 city and 24 highway mpg. In fact, it’s worse than that. During my week of mostly city driving, I achieved just 16 mpg – and I was by no means driving hard.

Despite this treatment, the Highlander is still no off-roader. Thanks to its unibody construction and limited AWD, about the toughest terrain I would trust the Highlander on is snowy road to the ski resort.

Putting it all together

Sadly, that is the trade off inherent in buying a crossover, and it is why I would personally prefer an SUV like the 4Runner or a minivan like the Sienna to a Highlander. However, given that crossovers are what everyone actually buys, I can easily recommend the Highlander.

It may not be the sort of car that makes gearheads go weak in the knees, but other than its subpar economy and ugly infotainment the Highlander has few true flaws.

So while the Highlander may still be a mom-mobile, it is at least one that no one should be ashamed to be seen in.