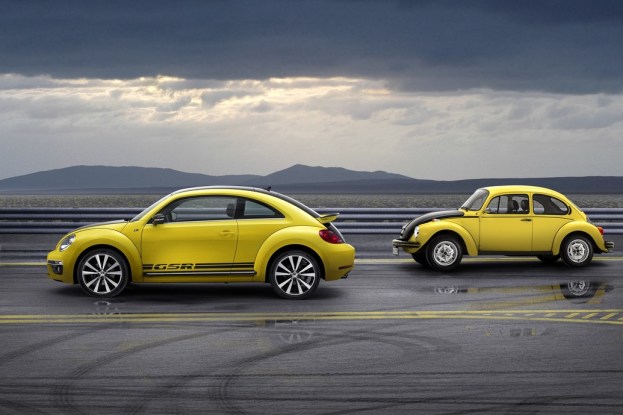 The Volkswagen Beetle is probably the most successful revival of a classic automotive name. Now in its second generation, it continues to draw smiles with its retro styling. The explains why Volkswagen is building a retro limited edition, complete with 1970s graphics and some extra power. The 2014 Beetle GSR was just unveiled at the Chicago Auto Show.

The GSR name was first used on the original Beetle in the 1970s. It stands for Gelb Schwarzer Renner, or “yellow and black racer,” which explains the car’s bumblebee paint scheme.

It’s hard not to notice the bright yellow color and the black hood and roof stripes, which echo those of the original GSR. The 2014 model also gets horizontal GSR stripes along the doors, so that anyone who remembers the first yellow and black Beetle can make the connection.

The GSR also comes standard with the R-Line body kit, which can be had on other Beetle models as an extra cost option.

To match the exterior, the interior is black with yellow contrasting stitching.

The 2014 GSR isn’t just about looks, though. It will be the first Beetle to get an upgraded version of VW’s 2.0-liter turbocharged inline-four. It has 210 horsepower and 207 pound-feet of torque. That’s a slight increase over the Beetle Turbo’s 200 hp, while both versions produce the same amount of torque.

The standard Beetle Turbo and the Jetta GLI will get the more powerful 2.0-liter engine beginning this model year.

If the GSR’s standout graphics aren’t unique enough, owners can take solace in the fact that Volkswagen will only build 3,500 copies. More than half are earmarked for the United States, but it’s still unlikely that two of these road insects will ever meet.

Pricing will be announced closer to the GSR’s fall 2013 on sale date but, since it’s basically a loaded Beetle Turbo with some extra options, it will probably top that model’s $23,395 base price.

Plenty of other carmakers revive classic names for special editions as well as regular production models. Just look at the way Ford dresses up a retro 2013 Mustang with blue and white racing stripes to make a neo-Shelby. What’s amazing about the 2014 Beetle GSR, besides its retina-assaulting paint, is that Volkswagen hasn’t thought to do this before.