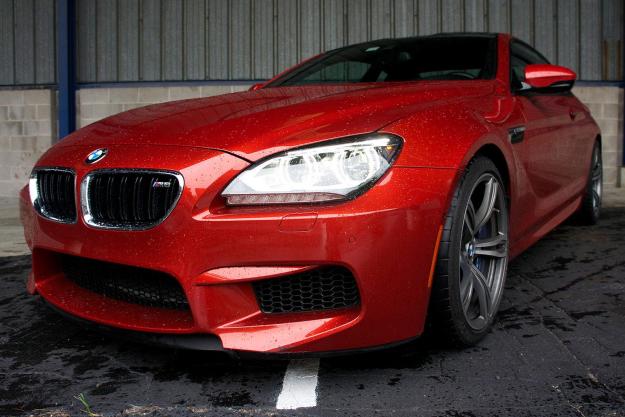 “The M6 loses a little of what BMW does best in trying to serve too many masters.”

Updated 11-19-14: This review originally covered the 2013 model year BMW M6 Coupe. The 2015 model year of the BMW M6 Coupe is in showrooms now. Though no substantial changes were made to the body, engine, transmission, or design of the car, BMW did include a few interior updates for the 2015 edition. All of the changes are listed below.

As an automotive journalist, I sometimes have this dilemma: What do I do when a car that I could never actually afford arrives, and it’s great – but not as great as other cars in its same spendy class?

Thrilling? Certainly. Intimate? Not at all. And, then there’s the price.

Part of me wants to gush over the engine that surely costs more than an entire year’s rent, and another part of me wants to turn up my nose, self-righteous and unimpressed, because I’ve driven better. Am I looking a gift horse in the mouth, or am I doing a service to the audience for which I review these things in the first place?

Now, don’t get me wrong; this car looks, sounds and performs magnificently. As the successor to the V10-powered monster that came before it, this new M6, which clocks in at $123,000 as tested, dials up just about every possible setting, even with a smaller engine.

It marries machine to technology, creating one of the fastest cars on the market today, but with software that keeps it from feeling all that fast. And, it’s a touring car at heart. It’s heavy. That leaves the M6 in a weird competition with cars that are either more tightly wound and rewarding to drive, like the Porsche 911 S or Nissan GT-R, or with cars that are just intentionally softer, like the Maserati GranTurismo or Mercedes-Benz CL.

The 2013 BMW M6 Coupe is a new car that replaces the performance variant of the 6 Series, which was last built in 2010. The car’s proportions have been smoothed over, and with a less-chunky butt and a less-depressed nose, I’d be lying if I said this was anything but hella handsome. My test car came with full-LED headlamps, turn signals, daytime running and brake lights, carbon-ceramic brakes (a $9,250 option), driver’s aides galore and cameras that looked around every angle of the exterior.

The interior is trimmed in leather and carbon fiber, though wood is optional for those looking for a more traditional luxury car. The iDrive infotainment and car adjustment system will still take some getting used to, but it displays on an attractive, high-res 10.2-inch touchscreen. There’s also a 200-GB hard drive hidden back there, 20 gigs of which are allocated to music storage.

The seats have 20 (yes, twenty) different electronic adjustments, including a setting that, let’s just say it, massages your butt. BMW says it helps lessen fatigue on long drives. There’s also an optional full-color heads-up display that presents music, revs, speed limits and navigation, depending on what you’d like to see at the time.

It marries machine to technology, creating one of the fastest cars on the market today

To get the most from all of that power, just about every driving feature can be electronically adjusted through the M Driving Dynamics Control. Steering can be made lighter or heavier, the suspension can switch between compliant and rigid, and the shifts on the dual-clutch automatic transmission can go between slow and leisurely to sporty and sharp.

This isn’t a small car. Instead, approaching it reminds me that I’m a small man, and I’m 6 foot 2 inches tall. It’s long and sleek and in this case, it’s orange. Its 20-inch wheels fill the wells completely, and the whole car looks kind of like a cat crouching down, observing its prey.

Open the doors, and it’s more like Jonah and the Whale. See, the M6 can’t hide the fact that it’s been to Frankenstein’s lab, where it started as a normal 6 Series coupe. And, that’s a touring car with beefy proportions, wide, comfortable seats, and enough room for an adult-and-a-half in the back. These seats aren’t quite as soft and comfortable as those in the 650i, but what they lose in comfort, they gain in bolsters for spirited drives. That doesn’t mean they’re built for petite racers, though. Size is part of the charm here. You feel large, in charge and wealthy in the driver’s seat, even if the car isn’t yours.

That’s what these executive coupes are all about, after all. It’s an outward statement of your success, and the M6 says that you’re more than just successful, but you’re wild, too. Push the start button, and your point is proven.

The engine rumbles to life, but it’s more hushed than menacing; more of its GT roots are showing. In “comfort” mode, the steering is smooth, easy, and the suspension is forgiving. It’s a real delight on the highway and revving through the gears gives you a little bit of that auditory bliss, too. For those relaxed Sunday drives, I’d recommend leaving the settings in their most relaxed modes, turning on all the driver’s aids, and letting the car work with you as you meander down the road.

Automated features are becoming more common in luxury cars – and all cars for that matter, and the M6 certainly has its share. It comes with automatic high beams for night driving, and they work well. When someone approaches in the distance, sensors see the oncoming lights the low-beams are activated. When that vehicle passes, the system switches back up to high beams and looks down the road again.

The M6 is dotted with cameras and sensors. Lane Departure Warning uses a forward-facing camera mounted near the rear-view mirror to watch the lines on the road. If the car begins to drift from its lane, the steering wheel vibrates to alert the driver. A blind spot detection system uses radar sensors to watch the rear corners of the car. If you’re planning to change lanes and there’s someone in that blind spot at 4 or 7 o’clock, a hazard light on the side-view mirror flashes brightly to warn you to wait. It’s great in multi-lane highway driving.

… the whole car looks kind of like a cat crouching down, observing its prey.

One especially neat touch is the backup camera, which is mounted under the rear-facing BMW badge. In normal driving, it’s not visible. Shift into reverse and the badge flips up a little, revealing the camera. It’s tech trickery right out of Q’s bag of tricks in a James Bond movie, but it also serves a good purpose by protecting the camera and keeping the lens clean a longer period of time than if it’s just hanging out in the grit-filled breeze behind the car all the time.

But as techy and safe as the M6 is trolling about town, it’s truthfully much more fun on back roads and mountain passes.

Switching the steering to sport or “sport plus” adds weight and feel to the wheel. Doing the same with the suspension tightens up the dampers. Adjusting the throttle control lets the car rev all the way to redline instead of shifting early for fuel savings. And don’t forget the M transmission tuner, a three-bar rocker set directly behind the gear selector. Tuning that to its most aggressive setting allows the transmission to grab gears quickly, rather than gracefully, and with all of these settings engaged and the traction control defeated, you’re in full-on M Mode. Hold on.

Here, the M6’s weight is most noticeable, because the car lets the back hang out a little more and at 4,255 lbs, there’s a lot back there to hang out. The chassis is magnificently rigid despite the car’s size, and the shifts in weight are predictable when you corner.

It’s amazing how nearly flat the car feels around turns, which we credit to BMW’s suspension engineering wizardry, which uses speed and direction sensors to activate the suspension at each wheel to counter body roll. If you’re taking the car to the drag strip or just want to impress friends, the launch control system will help you get the most out of your 0-60 time, rated at 4.1 seconds. M Dynamic mode has to be fully engaged, but doing so allows launch control to align the engine speed, gearing and throttle perfectly for maximum torque and minimal wheel spin. It’s the only way you’re going to overcome the turbo lag and achieve that 4.1-second blitz.

Launch control requires the transmission to function in manual mode, so just prepare yourself to shift from the paddles–you won’t get to 60 in first gear. What you will notice, though, is how lightning fast the tranny jumps between gears. Milliseconds, I swear. That’s the magic of a dual-clutch tranny. It can shift a whole lot faster than you ever could with a manual transmission.

A long, lean but understated look

I received mixed reactions when I showed it to friends and filled it up at the gas station. BMW fans knew what it was and drooled. M3 drivers orbited around it on the highway, and Mercedes AMG owners would rev their engines, hoping to catch me in a playful mood. It might’ve happened… once. And, the M6 proved that it’s lightning-quick in a straight line. I’m convinced that I could’ve beaten them on the track, too, but that’s an adventure for later.

Those less familiar with BMW thought it was just the new 6 Series, though, as if there weren’t enough exterior changes to give it that extra level of exotic flare. That’s not to say that it was beloved; this has to be one of the most attractive cars BMW has ever produced, but it also just doesn’t command the same attention that I’ve had in similarly priced cars.

In that regard, I’m thinking this is kind of like a Jaguar XKR. It’s brilliant and beautiful, but understated and more expensive than it looks. I have an ego, and this car just didn’t quite stroke it enough.

For the BMW faithful, there’s not a more powerful coupe available–this is it. And, it’s a legitimate performance car with size, space and presence that communicates that you’ve grown up and matured, somewhat, from your younger days with the M3. However, I’d still choose the M3, or the new M4 Coupe as the M3 will essentially be re-badged in the near future.

The M6 drives like a boat with rocket engines strapped to the back, and there’s just not enough car-to-driver feedback to really get this writer’s blood flowing. Thrilling? Certainly. Intimate? Not at all.

And, then there’s the price.

For this car’s $123,000 price tag, there are sports cars that are sportier, more communicative, and more exotic out there. Think Porsche 911 S or a base Audi R8. If you’re looking for your touring car, the M6 makes a great argument for either spending less and buying the 650i, or cashing in on the genuinely comfortable Mercedes-Benz CL550.

There’s no question that this is a fun car, but it loses a little of what BMW does best in trying to serve too many masters. As for me, I’d either choose between the M3 or the 650i, instead of spending double on what feels like only pieces of both.