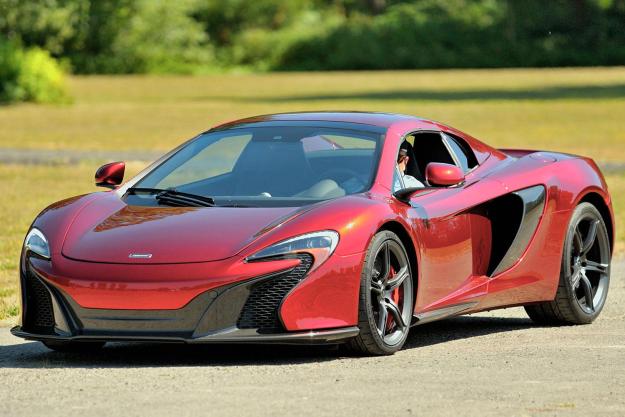 The McLaren 650S Spider does absolutely everything well. This technological masterpiece will go from 0-62 MPH in 3 seconds flat, and a top speed of 204 MPH will have anyone in the passenger seat shrieking in delight (or maybe panic). On the road, the 650S turns and stops better than just about anything else, and no matter where you park it you’ll draw a crowd of earnest admirers.

You want this car. Obviously. The only question is, do you want it bad enough to lay down one-third-of-a-million bucks for it, compared to everything else on the market?

The 650S is the latest supercar from McLaren Automotive. The 650 stands for the car’s Pferdestärke rating (roughly equivalent to horsepower), the S is for Sport, and the McLaren means Magnificent. Like past offerings from the exotic car company, the 650S is a pure supercar where price is no object and performance is paramount.

Digging right in where it counts, the 650S is powered by McLaren’s own 3.8-liter twin-turbo V8 engine, designated the M838T. The engine weighs just 438 pounds owing to its all-aluminum construction, and features a dry sump oiling system commonly found on racing cars. The engine also gets the usual array of nifty features including new development work on the heads, pistons, valve timing, and so on.

Most of the engine work, but not all of it, is designed to bring more power to the car throughout the engine’s power band — which stretches all the way up to a shrieking 8,500 RPM. You get four engine/transmission modes: Normal for around-town driving, Winter for driving in poor conditions, Sport for enthusiastic driving, and Track for obvious purposes. Most of the difference in these modes comes in the transmission, which will change its shift points and behavior to match the mode you’ve selected.

Sport mode contains a gimmicky feature that’s pure entertainment: In this mode, the engine will cut spark for a moment on full throttle upshifts. This produces a bolus of unburned fuel in the exhaust stream. That fuel is ignited when the spark comes back, creating a burst of flame out the back and a delightful pop. Sure, it’s a trick, but it’ll put a grin on your face every time.

The transmission is McLaren’s own 7-speed twin-clutch Seamless Shift Gearbox (SSG). Development on this unit has made upshifts lightning fast. McLaren isn’t lying about seamless, either. Upshifts are so smooth you have to listen for them, because at anything less than wide-open throttle, you won’t really feel them.

Downshifts give you a satisfying sense that someone (not you) is actually rowing down through the gears with a tight clutch. McLaren gives you a set of paddles to select your own gears, but don’t kid yourself; with the exception of knowing in advance that you want to take off like a bullet, the car shifts itself far more expertly than you can ever hope to achieve.

Oh, you get launch control, too. Don’t use it at Cars & Coffee.

McLaren isn’t going to give you less than a state-of-the-art suspension, so the company developed a system called ProActive Chassis Control (PCC). The fundamental construction is dual-wishbone on all four corners, but you get a completely active shock damping system that responds to three modes: Normal, Sport, and Track.

In Normal mode, the 650S is still a dedicated sports car, but you won’t give yourself kidney damage on the freeway. Sport mode tightens up the electric power steering and the suspension, yet retains a supple ride and street-level comfort. You can leave the car in Sport mode all the time and be happy.

McLaren is justifiably proud of the fact that this technology was banned in Formula One as being too much of an advantage.

One feature worth calling out is the McLaren Brake Steer system. This system uses the stability control to help you turn in to a corner by applying a touch of brake to the inboard rear wheel as you tip in the steering. This helps rotate the car and reduces understeer so you can get back on the power sooner. McLaren is justifiably proud of the fact that this technology was banned in Formula One as being too much of an advantage, but you get it on the 650S.

The brakes are similarly wonderful; you get 394mm vented carbon-ceramic discs in the front with fixed 6-piston calipers, and 380mm vented carbon-ceramic discs in the back with fixed 4-piston calipers. The brakes have an ABS system, and of course the traction and stability controls, along with the brake steering function, are all tied into the ProActive suspension. When you select sport or track modes, everything tightens up. You’ll have to work hard to overheat these binders, because the whole 650S package weighs in at just 3,000 pounds. For comparison, that’s about 500 pounds less than a BMW M3.

Step back from the car and all its technical wonderment for a moment and just take a look. The 650S is an attractive machine. You can’t get the true sense from photographs, but this is a big car. It’s low, wide, and long, with a menacing stance and undeniable race-bred aerodynamics. The car is just plain sexy.

Yet this is no concept car doodled on the back of a notepad and then ginned up for the road. Every contour of the bodywork has a functional purpose in pursuit of performance. The 650S benefits from the same slippery 0.36 drag coefficient as the previous McLaren MP4-12C, except that the 650S wrings 24 percent more downforce out of the same coefficient of drag at 150 MPH. Read that again, because it matters. Here’s the translation: Just by routing air over and through the car more efficiently, McLaren is delivering more downforce with no increase in drag. That’s as close as you’re going to come to getting something for nothing in this world.

The monocoque tub at the center of the car is made from carbon fiber, which McLaren calls a “MonoCell” design. It’s similar to the way Formula One chassis are made, and the technique is central to the performance and design of the car: A carbon fiber chassis is both light and rigid. The monocoque in the 650S is 25 percent stiffer than a comparable aluminum chassis. In addition, the carbon fiber MonoCell weighs just 165 pounds. Finally, aluminum subframes are attached to the central tub to carry the front suspension, engine, drivetrain, and rear suspension. Carbon fiber body panels wrap the package in aerodynamic goodness.

What’s really amazing is that McLaren managed to do all that and still give the driver a retractable hardtop to enjoy a proper roadster driving experience. That’s almost unheard-of. Generally speaking, serious high-performance cars need to be fixed coupes to achieve the required chassis stiffness and aero. Thank you, carbon fiber!

The limits of technology

We’ve already covered most of the details on the 650S, but let’s dive into the passenger compartment just for a moment and look at the presentation. You get the usual set of features, including a nice touch-screen about the size of a small tablet. Through it you have access to the infotainment, Bluetooth, satellite radio, and so on. There’s really nothing special here, but no one buys a McLaren for the bitchin’ stereo. You do get a backup camera, which is good because rear visibility in the 650S was sacrificed on the twin altars of downforce and drag, which is right and proper.

No one is going to buy this car because it makes good sense.

Here’s the thing about high technology, whether it’s in the center stack or the engine bay or the arcane control systems that keep the car out of the ditches: You can get almost all this stuff in other cars at a small fraction of the price of the McLaren 650S.

Seriously, you can stroll into any Dodge dealer in the country and pick up a four-door family car with a blown V8 at 707 horsepower. That car will do 0-60 in 3.7 seconds and the same 200+ MPH as the McLaren for about one-fifth of the price. Or get a Corvette Z06 and enjoy the same horsepower and 0-60 time as the McLaren for about $80,000. You can get active suspension, launch controls, and a nice twin-clutch transmission from a lot of different automakers, and almost all of them will give it to you for far less money.

That’s all a function of the democratization of automotive technology, but it misses the point of the McLaren 650S entirely. No one is going to buy this car because it makes good sense. This car exists to be the most absolute and excellent thing that McLaren can build. If that’s what you want, here it is, and the price tag be damned.

To bring this all back home, I recently had a ride in a supercar from another era — a Ferrari 512 BBi. Built in the early 1980s, the 512 came with a mid-mounted flat-opposed 12-cylinder engine rated at 360 horsepower. That was a screaming monster in its day. As we accelerated onto the freeway, the 512 broke its rear end loose on the 1-2 upshift and yawed dangerously. Fortunately, the driver knew his business and caught it. The Ferrari snapped back into line and away we went like a bottle rocket.

What’s the point? Just this: The McLaren 650S would never do that to a driver. That Ferrari has no traction or stability controls, no ABS, no active suspension. Some people would say that’s a virtue, but like almost all supercars of the past the Ferrari 512 is a beast to drive. If you get into that car and screw up, you’ll be Facebook Famous before they can drag you out of the wreck.

What you’re buying in the McLaren is a supercar that won’t ever embarrass you. Technology is going to save the pride of every McLaren owner who’s smart enough to never turn off the electric nanny. That’s worth the price of admission right there.

Alyssa Limperis on turning grief into comedy in No Bad Days