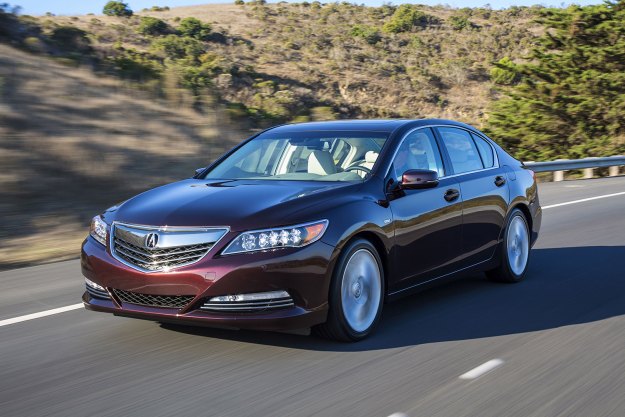 “The Acura RLX Sport Hybrid turns our notion of what a hybrid is upside-down, providing power and comfort that almost rivals its European contemporaries.”

Driving enthusiasts have grown accustomed to sneering at hybrids and the people who hypermile them, often camped in the left lane at 50 mph, but that was never the car’s fault. It’s also true that some of the early hybrids could hardly get out of their own way,

But in the last couple of years, we’ve seen hybrids really coming into their own as performance machines, yet still delivering substantial fuel economy benefits.

Like the BMW i8, Volvo XC90 T8, and the LaFerrari, The all-new 2016 Acura RLX Sport Hybrid proves that the designers at Acura have been following the same path as the Europeans – Throw away the old rules about how many motors a car can have, and where they have to be located. The surprising result is a completely different animal from the basic RLX sedan.

The modern approach to performance

In the modern world of wheel speed sensors and compact electric traction motors, it’s easier to move electrons around than to transfer kinetic energy with a driveshaft. The Sport Hybrid is powered by new technology handed down from the upcoming Acura NSX supercar.

Here’s the setup: the RLX Sport Hybrid uses three electric motors in conjunction with its gas-powered V6 engine. The front end of the car is a conventional hybrid design; there’s an electric motor placed in the driveline with the gas engine and the seven-speed dual-clutch transmission. That combination drives the front wheels.

The interesting part happens at the rear of the car, where there are two electric motors on either side of a special differential. Like the BMW and the Volvo designs, there’s nothing connecting the two drivetrains except wiring. The car can move on gas or electric power, using front, rear, or all-wheel-drive as needed.

In addition to the extra horsepower and torque, you also get fuel economy. The hybrid nets you 28 mpg in the city, 32 on the highway, and 30 mpg combined for real-world driving. In addition,the RLX offers start/stop on the gas engine and Acura’s Variable Cylinder Management, which will cut fuel to three of the V6 cylinders if max power is not needed.

Out on the road, what you care about is that the RLX Sport Hybrid is a big, fast car with plenty of power. Acura has not posted an official 0-60 time, but it’s in the five-second range. For practical purposes, you never lack for power under your foot in this car.

Any automaker can give you a powerful car, and how the RLX Sport Hybrid sets itself apart is with the latest generation of Acura’s SH-AWD system. Since each wheel has an electric motor within, the RLX not only uses them to drive the rear wheels but also to help the car turn with authority.

For practical purposes, you never lack for power under your foot in this car.

Acura’s SH-AWD system has always used torque vectoring to send power to the wheel that needs it the most, but the Sport Hybrid uses those twin electric motors to apply a little drag to the inside rear wheel in a corner and a little more power to the outside rear wheel. That makes the RLX take a good stance and turn briskly into any corner.

As if that wasn’t enough, the SH-AWD system takes the electricity generated by dragging the inside rear wheel and uses the juice immediately to provide more power to the outside wheel, so you don’t even have to use battery power to get the handling benefits. Unlike previous gasoline-powered torque-vectoring applications of the SH-AWD system, this works whether you are accelerating into the corner, holding steady throttle, or coasting down. That’s good news if you happen to come into a corner a little too fast, or if bad weather or the road surface has reduced your available traction.

Speaking of traction, you get all the usual goodies that help keep the RLX pointed where you want to go no matter what happens. Vehicle Stability Assist and Acura’s Agile Handling Assist use the brakes as well as the various motors to keep you out of understeer or oversteer, and generally to help you feel confident as you drive.

The luxury of extra room

The high technology of the engine and driveline are the core of the value proposition of the RLX Sport Hybrid, but let’s not forget that this is a luxury car. Acura’s large sedan would be nowhere without the creature comforts and human interface tech people expect in a state-of-the-art vehicle.

Audio and information displays are top of the line, with hands-free text and e-mail response service.

Inside, the RLX is comfortable and roomy in both the front and the rear. Nice Milano leather upholstery and quality touch surfaces are there to remind you that you’re riding in Acura’s finest. The RLX provides rear leg room equivalent to the Jaguar XJ and BMW 7-series, and a tad more than the Lexus LS or the Audi A8.

Climate control is truly customized in the RLX. in fact, it’s linked to the key fob, so the car will prep itself differently for different drivers. The climate control even checks the navigation system and calculates where the sun is, to further keep you in perfect comfort. The seats have more adjustments than a chiropractor’s office, and both front seats are heated. The front seats add cooling and the outside rear seats get heat if you opt for the Advance package.

A split screen sits in the center stack, and a third display is set between the old-style analog speedometer and tach. The lower display covers audio and climate functions – and you do get real knobs to use, which is important. The upper display is for navigation, with turn directions mirrored in the gauge cluster display and in the heads-up display.

Cars with a heads-up display usually project little more than a digital speedometer readout onto the windshield in front of you. In the RLX, however, drivers can use the steering wheel controls to cycle through a variety of displays, including a tachometer, navigation directions, adaptive cruise control and lane-keeping information, and the power distribution monitor. This last one is the display you’ll want to play with for the first week you own the car. It shows you which wheels are driving and when they’re using regeneration to slow the car.

Audio and information displays are top of the line, with hands-free text and e-mail response service, and voice control for everything. If you want it, the RLX has it, including the AcuraLink app that integrates your phone to the car. Notably, you get the bird’s eye surround-view parking camera view as well as a conventional backup camera.

The RLX Sport Hybrid drives very nicely. You’ll never know how the engine and electric motors are dividing up their work unless you have the display working – it’s that smooth. You’ve got plenty of power under your foot and the car corners like a much smaller and lighter machine than it really is.

For past Acura owners, everything that you ever loved about driving an Acura is improved in this car – except road noise. Even with all the attention paid to noise reduction, it’s still higher than it should be in a car purportedly as luxurious the RLX. In a week of driving, that’s the only fault we could find.

What you need to know is that the 2016 Acura RLX Sport Hybrid competes with the best of performance luxury sedans from any manufacturer, and should be on any luxury buyer’s short list.

The 2016 Acura RLX Sport Hybrid starts at $60,870 including fees. Or you can spend $66,870 and get the car with the Advance Package, which includes a bunch of comfort and convenience features including heated rear seats and ventilation on the front seats, a set of sunshades, and the Krell ultra-premium audio system. On the safety side, the Advance package includes adaptive cruise control with low-speed following function, lane keeping assistance, and parking sensors all around.