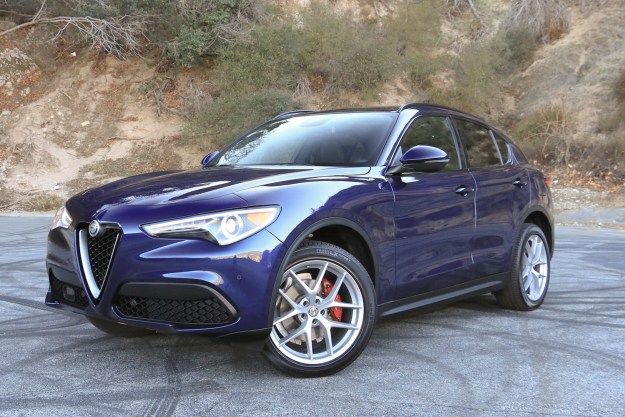 “While imperfect, the Stelvio does offer an interesting blend of Italian style, performance flair, and crossover utility.”

After a thirteen year hiatus, Alfa Romeo re-entered the North American market in 2008 when the 8C Competizone sports car found its way across the Atlantic. But with a price tag north of a quarter million dollars and an extremely limited production run, the 8C was seen as something of an anomaly rather than the new norm.

The 4C that arrived a few years later put Alfa Romeo performance at a far more accessible price point, but the mid-engined sports car still appealed to a limited audience. It wouldn’t be until last year’s North American debut of the Giulia that Alfa Romeo would start to set its sights on a significant swath of the U.S. market, as that sports sedan was purpose-built to capture the hearts and minds of BMW 3-Series and Mercedes-Benz C-Class buyers who value outright performance over inherent prestige.

Still, when considering how the automotive market has shifted over the past few years, sports sedans are becoming an increasingly niche. That makes this, the Stelvio Ti, the company’s first modern foray into the American mainstream, as the mid-sized crossover segment is among the largest in the industry today. Intended as Alfa’s volume seller, the success or failure of the Stelvio Ti is likely to play a significant role in determining the company’s fate in North America over the next few years.

The Stelvio’s resemblance to the Giulia is more than skin deep, as the crossover rides on a modified version of the same Giorgio platform which underpins the sedan, here sending power to all four wheels rather than just the two in the rear.

Powering the TI is a direct injected 2.0-liter turbocharged four cylinder that develops 280 horsepower and 306 pound-feet of torque, which is mated to a ZF eight-speed automatic gearbox with steering column-mounted paddle shifters.

Like the Giulia, a fair amount of the Stelvio platform’s engineering shows a focus on performance, as evidenced by the near-perfect 50/50 weight distribution as well as the use of lightweight aluminum for the hood, fenders, tailgate, and suspension components.

The Stelvio will initially come in three distinct flavors. The standard Stelvio will serve as the base model while the Ti (Turismo internazionale) seen here provides a handful of upgrades like larger wheels and a bigger infotainment display.

The third model, the Stelvio Quadrifoglio, is due to arrive in 2018 with the same twin-turbocharged, 505 horsepower V6 found in the Giulia Quadrifoglio, along with a laundry list of other performance-focused upgrades like adjustable suspension, bigger brakes, and other go-fast hardware.

Outfitted to our tester is the optional 8.8-inch center display (a 6.5-inch display is standard in the base model). In a curious design choice, rather than utilizing the excellent Uconnect system found throughout much of parent company FCA’s current vehicle roster, this system is bespoke to Alfa Romeo. Rather than using touchscreen controls, it employs an iDrive-system rotary knob and hard button interface on the center console to navigate its menu system.

The system is both light on features – Apple CarPlay and Android Auto are due out later in the model year – and not without its share of quirks, like the bizarrely small backup camera display, which occupies less than half of the screen when in use and is positioned as far away from the driver’s vision as possible.

The system seems reasonably responsive overall though, and the menu layout will likely feel familiar to anyone who has spent time in a modern BMW, Audi, or Mercedes-Benz.

In step with the Stelvio Ti’s exterior design, the crossover’s cabin emphasizes a sense of sport-oriented motoring by way of a flat-bottomed steering wheel, large paddle shifters, aggressively bolstered sport seats – the latter of which are part of the optional Sport package – and a pair of large analog gauges for the engine revs and vehicle speed.

But it also feels like a bit of a tradeoff, as the interior is not nearly as luxurious as some of the other competitors in the segment, and some materials like the plastics used for touch points like the infotainment and drive mode controls have a low-rent feel in hand. It is a comfortable place to do the business of driving though, and small touches like the Start/Stop button, which is mounted to the steering wheel rather than instrument panel, give the Alfa’s interior a sense of occasion.

The Stelvio Ti exhibited a noticeable amount of body roll and brake dive when driven spiritedly.

Considering the Stelvio’s performance-oriented design and the more aggressive tuning provided by that Sport package, it was surprising to find that our tester’s handling still favored compliance and ride quality over flat cornering, and the Stelvio still exhibited a noticeable amount of body roll and brake dive when driven spiritedly.

The four-piston Brembo front brakes provide plenty of stopping power, but a lack of linear response through the pedal translated to inconsistent performance around town. Occasionally we’d apply the brakes in traffic and find they weren’t slowing the vehicle down enough, only to come to an abrupt halt shortly thereafter when dialing in just a bit more pressure.

Alfa Romeo says the Stelvio Ti will sprint to 60 mph in 5.4 seconds on its way to a 144 mph top speed – impressive numbers considering this 4,000-pound SUV is powered by a four cylinder mill. It’s clear that the twin-scroll turbocharger is doing most of the heavy lifting here, as the car really starts to find its legs once the boost comes in.

We found that leaving the DNA drive mode selector in Dynamic helped keep the power train responsive to inputs, but it’s the Natural and Advanced Efficiency modes which helped the Stelvio earn its 24 mpg combined rating (22 city / 28 highway). Fortunately the selector on center console makes switching between these three drive modes on the fly very easy.

Active safety features like blind spot monitoring, lane departure warning and forward collision warning are available as part of the Driver Assistance Static and Driver Assistance Dynamic Plus packages. The Stelvio is also outfitted with frontal, side impact, and side curtain air bags as standard.

The Alfa Romeo Stelvio has not yet been tested by the IIHS or NHTSA, but has earned a five-star Euro NCAP safety rating.

While imperfect, the Stelvio does offer an interesting blend of Italian style, performance flair, and crossover utility. Those looking for a truly performance-focused machine will probably want to wait for the Quadrifoglio model later this year, as the TI’s four cylinder power plant has too much mass to lug around and the suspension tuning is too soft to deliver a truly thrilling driving experience.

However, for folks who’re looking for a functional crossover that will stand out in the parking lot and offer a sense of uniqueness each time one sit downs behind the wheel, the Stelvio Ti feels purpose-built to deliver that.

That really depends on your priorities and your pocket book. A Porsche Macan GTS will run circles around the Stelvio Ti, but with a $67,000 starting price, it’s over $10,000 more expensive than the TI’s as-tested price of $54,090.

On the other end of the spectrum, the BMW X3 has a starting price roughly three thousand dollars lower than the base Stelvio, but it comes at the cost of relative anonymity and a less performance-oriented design.

As this is the Stelvio’s debut model year, we would expect only incremental improvements for the next few years before a significant update is applied.

Yes. If there’s an emotional purchase to be had in the crossover segment, this might be it. While it’s true that the Stelvio lacks the feature set and luxuriousness of some of the strongest options in the segment, its aesthetic and performance-oriented engineering show where Alfa Romeo’s focus was in terms of the Stelvio’s overall design. If that jives with your sensibilities, then this Italian crossover was made for you.