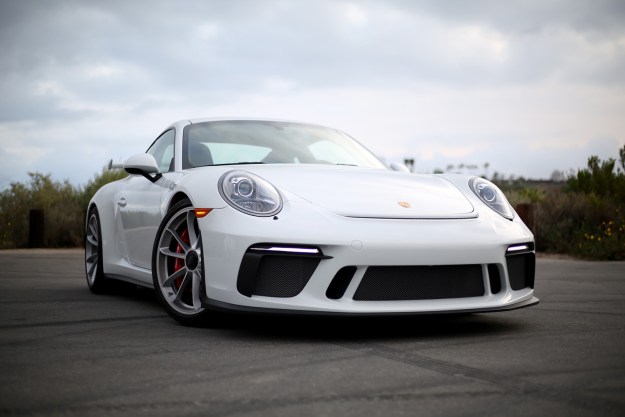 “Thank goodness for the Porsche Cayenne.”

After 30 seconds behind the wheel of the 911 GT3 (which included 25 seconds of incoherent mouth noises), our first thought is more a deep sigh of gratitude for Porsche’s cash cow. You see, without the Cayenne – a vehicle no enthusiast wanted (initially) and yet every enthusiast should be immensely thankful for – Porsche would look very different today. But the German automaker exercised all its engineering cleverness to craft an SUV, sold a ton of them, and financed sports cars like the 911 GT3.

Porsche’s track-focused 911 variant returns for the 991.2 generation with a reworked 4.0-liter six-cylinder engine based on the previous GT3 RS, an available Touring package, a taller rear spoiler, and the return of the manual transmission. Those who care little for daily driving comfort can upgrade to the all-new, 520 horsepower GT3 RS, but the standard GT3 remains the all-purpose performance solution.

Never has the GT3 faced such competent competition, but Porsche is in no hurry to give up its mantle.

The running joke is that if you’ve seen one Porsche 911, you’ve seen them all. Truth be told, 911 versions slotting beneath the GT3 and range-topping GT2 have a tendency to blur together on the open road. For some, that incognito aesthetic is right on the money, and decades of the same iconic shape suggest fewer deviations from the baseline are best. For these folks, Porsche now offers a no-cost Touring package that deletes the GT3’s rear spoiler. Savvy shoppers will note this is the second time the GT3’s performance has been served up without a wing, but unlike the limited-run 911R, there are plenty of GT3 Tourings to go around.

There’s more to the GT3’s design than just its spoiler, though. A range of standard, metallic, and specialty paint colors help the GT3 stand out at a stoplight, a distinct front fascia with larger inlets funnels air to all the right places, slender LED taillights and a wider, lower body give the GT3 an aggressive stance, bright red brake calipers sit at the ready, and 20-inch forged alloy wheels wrapped in Michelin Pilot Sport Cup 2 tires (sized 245 up front and 305 in the rear) make for a distinctive stance. These elements on another car could fall under the boy racer category, but on the GT3, they comprise a purposeful physique.

All luxury vehicle interiors offer some combination of premium materials, advanced technology, and enduring comfort. Porsche adds to the mix a performance-inspired design, deeply rooted in the brand’s racing heritage. From the prominent tachometer positioned at the center of the driver gauge cluster, to the left-hand ignition system (a remnant of Le Mans competitions, when drivers saved time at the start of a race by turning the key with their left hand while shifting into first gear with their right hand), to the available analogue lap timer perched on the dashboard; a Porsche cockpit is all about the drive.

The 911 GT3 brings additional performance details like Alcantara touch points on the steering wheel, gear selector, door panel, armrest, and seat inserts. Those who prefer a more traditional luxury experience can substitute Alcantara for leather, either via the Touring package or standalone customization. Unlike the minimalist McLaren 570S, the hyper-stylized AMG GT R, or the economy-issue Corvette Z06 interiors, the GT3’s integration of analogue and digital feels more natural and upscale.

Despite the car’s track readiness, passengers forfeit little in the way of ride quality or traditional luxury.

Long-haul comfort and practicality are more of the GT3’s strengths. Despite the car’s track readiness, passengers forfeit little in the way of ride quality or traditional luxury. The seats, especially, are astonishingly plush for all their lateral support. Even two- or three-hour sojourns leave us feeling fresh upon arrival. Two-stage dampers are stiff by default, though expert at filtering harsh bumps before they enter the cabin.

Combining the front trunk and space where the rear seats would be on a standard 911, the GT3 offers 14 cubic feet of cargo volume – exceeding the utility of each of its main rivals. It’s odd to think of a Porsche 911 GT3 as a smart road trip companion, but with an available Bose surround sound system, comfy seats, room for baggage, and agreeable suspension tuning, we don’t mind the prospect at all.

Porsche’s Communication Management System (PCM) works through a 7.0-inch touchscreen, incorporating navigation, multimedia, telemetry, and smartphone integration in one sharp, colorful display. Paired with a reconfigurable 4.6-inch digital gauge, stationed to the right of the tachometer, the infotainment setup is responsive and intuitive. Apple CarPlay comes standard, but Android users won’t find their preferred connectivity tool. Mercedes-Benz’s COMAND module has come a long way, and is a close second to PCM, but we still prefer Porsche’s arrangement to any of its stated competitors.

Keeping with Porsche’s theme of prioritized driver control, active safety features are effectively nil. Anyone looking for assistance tools in their high-performance two-door will have better luck with the AMG GT R, but all other vehicles in this segment forgo these technologies.

In this specialized segment of automotive manufacturing, everything boils down to the driving experience. This is where the Porsche 911 GT3 truly comes alive. At the heart (or rather, hindquarters) of the GT3 is a 4.0-liter “flat” or horizontally opposed six-cylinder engine producing 500 horsepower and 339 pound-feet of torque. Buyers have their pick of a six-speed manual gearbox or Porsche’s PDK/dual-clutch automatic with steering wheel-mounted shifters. Equipped with PDK and launch control, the GT3 rockets to 60 mph in 3.0 seconds en route to a 197 mph top speed. PDK also adds one mile-per gallon in combined estimates (17 mpg), though the GT3 is tied with the AMG for least efficient in this set.

500hp is a tremendous dose of power — especially without any flavor of forced induction — yet each of the GT3’s rivals offers more. The McLaren 570S conjures 562 horses from its 3.8-liter twin-turbo V8, the Mercedes-AMG GT R steps up to 577-hp from its 4.0-liter twin-turbo V8, and the Corvette Z06 produces a massive 650-hp from its supercharged 6.2-liter V8. Despite its disadvantaged output, the featherweight GT3 is tied with the Z06 and 570S for quickest to 60 mph.

Whether you believe engines have distinct personalities or not, there’s something to be said for the 911 GT3’s raucous six-cylinder. Free from the inherent torque delay of forced induction, the GT3’s powertrain perks up at the first hint of throttle tip-in. Power builds progressively, but it’s near the car’s soaring 9,000 rpm redline that a certain transformation takes place. Above 6,500-rpm, where most engines are winding down, the 4.0-liter’s pre-workout is kicking in – hard. Amidst the frantic blare of a flat-six at wide open throttle, it takes every ounce of willpower to not flail our arms in glee. Instead, we grip harder into the perfectly molded steering wheel and watch there become here, over and over again.

So addictive is the acceleration experience that one wishes for nothing more than an abandoned airfield and a week’s vacation – that is until you try a corner or two. On the surface, the Porsche 911’s handling prowess does not compute. How does all that weight over the rear (58 percent of total mass) translate to ideal performance? It all starts to make sense when you consider the constant shift of weight when accelerating or braking. Accelerating applies weight to the rear, leading to more grip in the rear-drive GT3, and braking distributes force more evenly than a front-engine car. Mid and front-engine layouts have their own benefits, but powertrain placement is only as effective as the accompanying chassis.

Smoothness and urgency characterize the GT3’s gearbox, brakes, engine, and chassis; the interplay of each piece affords the driver ultimate control. Each of the 911 GT3’s rivals purport engagement and finesse, but to a limited degree of modularity. If every other car adjusts to inches of accuracy, the GT3 does so to millimeters of precision.

Porsche offers a new vehicle warranty with 4 years or 50,000 miles of coverage. Included in the warranty is a 24-hour roadside assistance program, but unlike many of Porsche’s luxury manufacturer rivals, free scheduled maintenance is only included for the first year. For a vehicle like the GT3, where even standard maintenance is expensive (some sources estimate $9,000 for the first five years of ownership), this short term of free scheduled service is a bit of a letdown. On the flip side, Porsche engineers its vehicles to last, regardless of how often you drive them aggressively. J.D. Power rates Porsche 5/5 for both dependability and overall quality, and owners consistently express positive experiences via online forums. In short, the GT3 may be expensive to service, but it is unlikely to surprise you with any defects.

Our perfect 2018 Porsche 911 GT3 isn’t cheap, but it’s one we’d drive proudly everyday. The most expensive and, for some of you, controversial option on our ideal GT3 would be the $4,220 Miami Blue paint job. Photos can’t do this color justice, but there’s simply no other production paint like it. It’s difficult to give up Porsche’s brilliant PDK automatic, but for sheer entertainment, we’d have to equip the no-cost manual gearbox. So we don’t scrape that gorgeous front end, we’d install the hydraulic lift system ($2,590). While the GT3’s mpg ratings aren’t abysmal, we’d prefer fewer fill-ups and therefor opt for the extended range fuel tank ($140). Inside, we’d equip auto-dimming mirrors with rain sensors ($700), front seat heating ($700), voice control ($0), and Bose surround sound system ($1,700) and, for a dash of color, Miami blue seat belts ($360). All told, our dream 911 GT3 is $154,960, including destination fees.

It’s rare for us to be so completely enamored with a car. We consider the drawbacks, the inadequacies, and even the missed opportunities of each vehicle’s design. Something usually turns up – fatal flaw or lesser blunder – but the Porsche 911 GT3 doesn’t flinch. By all the measures that define a great sports car — performance, usability, styling, and consistency — the GT3 is a cut above. Any real marks against the Porsche feel subjective; if the design doesn’t appeal, no feats of engineering will change someone’s mind.

What of the GT3’s rivals, then? At almost half the price, the Corvette Z06 can go toe-to-toe with the GT3 at the track, but build quality and curb appeal are landslide victories for the Porsche. With its dihedral doors and low-slung stance, the McLaren 570S looks and performs like a true supercar, but as such, comes with a supercar price tag and practicality constraints. The Mercedes-AMG GT R comes closest to toppling the mighty GT3, and some may prefer its oh-so-lovely silhouette, but there’s no mistaking which of the two cars has the engineering edge.

At the risk of offending classic Porsche fans, we say the 911 GT3 has never been better.

With or without its distinctive rear spoiler, the 2018 Porsche 911 GT3 is one of the best sports cars of all time. Yes, you should get one.

Updated May 13 with GT3 R and RS starting prices.