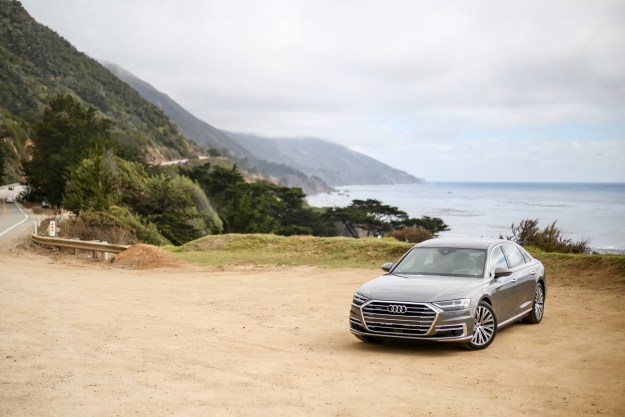 “By all measures, Audi’s fourth-generation A8 is a considerable leap beyond its predecessor.”

Audi tells us the luxury buyer has changed. Glitz and glamour are no longer primary selling points. Relaxation and convenience are the new premium currency, and the focus of Audi’s all-new range-topping A8 sedan.

Understanding its customer is only half the battle. Audi must execute with cutting-edge features that enhance passenger comfort, not overwhelm them. The 2019 A8’s outline looks promising: Level 3 autonomous driving capability (pending regulatory approval) to take the frustration out of driving in traffic, haptic-feedback infotainment screens to reduce driver distraction, rear-wheel steering to cut the big sedan’s turning radius dramatically, and a predictive suspension to smooth out even the most pock-marked roads.

For the last three generations, Audi’s A8 has trailed its main rivals — BMW’s 7 Series ($86,100) and Mercedes-Benz’s S-Class ($92,900) — in sales and prestige. Styled for impact and engineered for exceptional ride and handling, the fourth-generation A8 may finally disrupt the full-size luxury car market.

Our first drive of the 2019 A8 ($84,795 including destination) takes us to Big Sur, California’s breathtaking coastline. Here we can put the ultra Audi and its segment-exclusive technologies to the test.

The tricky part about improving interior technology while reducing clutter is that, typically, the side effect is frustration. Most touchscreen infotainment systems have confusing menu structures, awkward controllers, and/or painful delays. Meanwhile, a physical button or knob may not look sleek, but it’s dead simple and requires minimal attention to operate.

The new A8 strips all but a few physical inputs from its center stack, yet affords one of the most intuitive tech experiences of any luxury vehicle. How? Audi’s solution uses a pair of haptic feedback monitors with customizable menus and lightning fast processing: a 10.3-inch upper display accesses navigation, music, and various vehicle apps, while an 8.6-inch lower screen controls HVAC settings, seating configurations, handwriting, and 32 menu shortcuts. While not a completely eyes-free exercise, operating either of these displays in motion is far less distracting than non-haptic monitors. We expect owners with customized menus will be able to effortlessly navigate the system.

Other tech highlights include an updated, full-color head-up display with more relevant information like traffic signs and driver assistance data, as well as a revitalized virtual cockpit display with sharper graphics and faster processing via a new NVIDIA chip.

Aesthetes aren’t the only benefactors of Audi’s tech-rich interior. Bang & Olufsen crams a truly bonkers 1,920-watt, 23-speaker 3D sound system into the A8’s nooks and crannies to deliver incredible audio quality for a $5,900 upcharge over the standard setup.

Active safety is a distinct focus of the fourth-generation A8. Though we could only sample some of the car’s assistance technologies, the list of currently available and upcoming features is astonishing. Every A8 ships with a total of 24 sensors (including the first production car laser scanner), one forward-facing camera, and a central processing computer to monitor short, mid, and long range.

Though U.S. regulations prohibit level 3 autonomous driving at this stage, the A8 will come with Audi’s traffic jam pilot, which enables completely hands-free, pedal-free motoring up to 37 mph. When the law changes, Audi will send an over-the-air update to enable these features in the A8. At speeds above 37 mph, the A8 isn’t currently setup to work autonomously, though our experience with Audi’s adaptive cruise and lane keeping assist on Pacific Coast Highway tells us the A8 is no more than a few tweaks away from safely commuting sans driver input.

Perhaps the coolest of Audi’s pre sense 360 active safety technologies initiates when the A8 senses an impending side impact. In half a second, the A8 will raise its air suspension by three inches on the side of the t-boning vehicle. This action puts the A8’s side sills — which are stronger than its doors — in between the approaching vehicle or object and the A8’s passengers.

Taking the bite out of bad roads

When the new A8 hits dealers this month, it will be packaged with one engine and transmission combination. A 3.0-liter turbocharged V6 shuttles 335 horsepower and 369 pound-feet of torque to all four wheels via a ZF-sourced eight-speed automatic gearbox. Playing a supporting role is Audi’s belt-alternator-starter motor, which powers a 48-volt electrical system for mild hybrid assistance. Though the system contributes a small amount of low-end torque, it has little impact on the car’s 5.6-second sprint to 60 mph or its total output.

From the passenger seat, it’s as if the 2019 Audi A8 simply deletes road imperfections.

Audi’s Quattro all-wheel drive system spurs the A8’s 4,751 pounds into motion with zero drama, though mid-range acceleration requires more patience. Drivers who find themselves in a constant hurry will want to hold off for either the 4.0-liter twin-turbocharged V8 or plug-in hybrid versions — both of which will deliver more than 100 extra horses. Fuel economy figures for all powertrains are still under wraps, but we averaged 20 mpg at the helm of the standard A8.

Though the forthcoming S8 will spice up driving dynamics considerably, the A8 is engineered primarily for passenger comfort. On the standard air suspension, the flagship sedan distils junky roads and bumps impressively. To experience a greater level of isolation and smoothness, though, Audi’s predictive active suspension is a must-have. Using its abundant sensors, the A8 scans the road ahead for imperfections. Spotting something bothersome, the air suspension lifts by two inches to absorb the impact before extending beyond the obstacle. From the passenger seat, it’s as if the A8 simply deletes the problem — no sway, no jarring, just graceful motion.

The new A8 takes on some yacht-like characteristics, but thanks to Audi’s dynamic rear wheel steering system, it maneuvers like a compact sport sedan. Rear wheel steering is nothing new (it’s 30-year old tech, in fact), but Audi’s application is the perhaps most sophisticated and seamless to date. The universal concept still applies. At low speeds, the rear wheels turn in the opposite direction of the front wheels to shorten the car’s turning circle; at high speeds, the rear wheels turn in the same direction to make the vehicle more stable.

The difference this time around is the speed of transition and the degree of turning angle. At parking lot speeds, Audi says the rear tires pivot up to five degrees to give the A8 a sharper turning radius than the compact A4. At higher velocity, the A8 notes a change of direction and pivots the rear tires near instantly to give the A8 incredible surefootedness. The delay and resulting “double-turn” sensation we’ve experienced in other rear wheel steering systems doesn’t plague the A8 one bit.

Design refinement inside and out

Subtlety has been the strength and weakness of the last three generations of A8 design. Juxtaposed with the showy S-Class or 7 Series, the A8 is a delicate assertion of luxury. Retaining its sophisticated niche is important, but for Audi to catch the attention of BMW and Mercedes-Benz shoppers, the new A8 needed a bit more charisma.

Clean, elegant, and composed of high-end materials, the A8’s cabin is tranquil to commute in.

Inspired by the 2014 Prologue concept, the 2019 A8 is Audi’s boldest sedan yet (we’re counting the A7 as a “four-door coupe”). A massive front grille and wide air inlets are decorated with horizontal chrome slats, creating a sense of width. Optional Matrix LED headlights (yet another U.S. regulatory waiting game) glimmer within their narrow housings.

Character lines encompass the entire vehicle’s exterior, stretching from one headlight to the other. The A8’s longer, taller body makes standard 19-inch wheels seem diminutive, but Audi offers 20 and 21-inch styles to better fill out the “Quattroblister” wheel arches.

Our least favorite angle on the A8 is its rear view. Optional OLED taillights with lock and unlock animations look wicked at night, but during the day, they do little to enhance the car’s drab rear fascia. The A8’s butt isn’t so uninteresting as to ruin the exterior aesthetic, but we wish Audi had given the rear as stylized a look as the front and side views.

Inside, however, the A8 is a complete success. Clean, elegant, and composed of high-end materials, the cabin is a tranquil place to commute in. A winged dashboard design splits real wood grain trim and piano black surfaces on stepped tiers. Plush leather front seats are available with 22-way adjustment, heating, ventilation, and massage functions. An ergonomic gear selector provides a comfortable place for the driver to rest his or her wrist while scrolling through the bottom touchscreen.

Rear seat passengers have it even better, with available reclining seats, power sunshades, Matrix LED reading lights, and a heated foot massage. All of these niceties are controlled via a detachable tablet the size and shape of a smartphone. Audi says the rear seats of its comfort-packaged A8s are business class-like, but, as a frequenter of overseas flights, we’ve yet to encounter a heated foot massage. Audi 1, airlines 0.

Like all new Audi models, the 2019 A8 will come with four years/50,000 miles of limited warranty protection. Also included is four years of 24-hour roadside assistance and your first scheduled maintenance. Audi’s coverage matches up directly against its German rivals.

The 2019 A8 sets new benchmarks in full-size sedan technology and driving refinement, but these achievements don’t guarantee luxury shoppers will trade in their BMW 7 Series or Mercedes-Benz S-Class. Last year, the 7 Series outsold the A8 two to one and the S-Class trumped its German rival by a ratio of five to one.

For the new A8 to claw back some market share, Audi needs to aggressively advertise its flagship’s advanced comforts. Discerning buyers will note the A8’s undercutting price ($2,300 less than the 740 xDrive and $9,100 less than the S450 4Matic) and class-leading safety and driver assistance features. If Audi’s claim proves true — that luxury consumers now desire serenity over flamboyance — the glamorously styled 7 Series and S-Class may not attract buyers as effectively as before.

The 2019 Audi A8 is an opportunity to experience technologies never before seen on a production vehicle. As such, our ideal spec weighs heavy on convenience and safety goodies. Dressed up in moonlight blue metallic paint with saiga beige leather and natural ash grain wood inlays, our configured A8 adds the executive package ($4,150) with a top-view camera, a head-up display, Audi side assist, 22-way ventilated and massaging front seats, and dual-pane glass.

We would also equip the lighting package ($3,400) for Matrix headlights and OLED taillights, and the driver assistance package ($2,750) for adaptive cruise control, traffic jam assist, active lane assist, and intersection assist. With destination, our ideal A8 has an MSRP of $95,095.

By all measures, Audi’s fourth generation A8 is a considerable leap beyond its predecessor. Advanced comfort, convenience, and safety technologies set new full-size luxury sedan benchmarks for ride quality, handling, and usability. Siphoning S-Class and 7 Series buyers won’t be easy, but Audi has the right product to disrupt the segment.