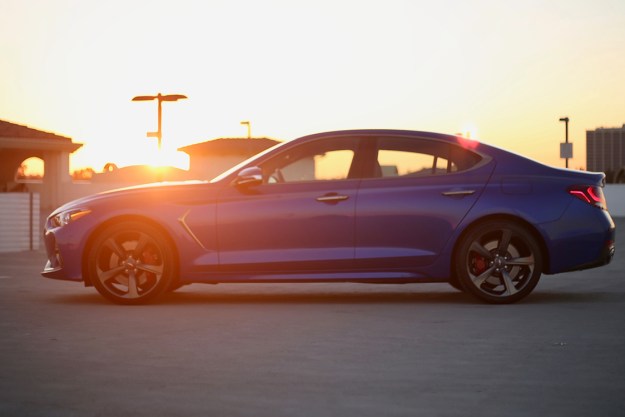 “The 2019 Genesis G70 doesn’t at all feel like a first attempt at a sporty, luxurious compact sedan.”

In 1983, Toyota began developing a full-size luxury sedan to rival BMW’s 7 Series and Mercedes-Benz’s S-Class. In global markets, that model came to be known as the LS400 – the first vehicle from Toyota’s new premium brand, Lexus.

The same year of Lexus’ unveiling, another Japanese automaker began marketing its first luxury vehicle. Nissan’s newly-formed Infiniti brand took aim at the same full-size sedans with its Q45. Today, Lexus boasts a full range of direct challengers to German luxury staples, and is renowned for its build quality and vehicle comfort. Infiniti, meanwhile, has settled into a lower class of cars known as “entry-level” luxury vehicles and rarely enters the same conversation as traditional premium brands.

Despite entering the market at roughly the same time and offering similarly competitive models, Lexus and Infiniti have walked two very different paths. And though Infiniti has rallied recently with improved designs and convenience features, its products are still judged primarily by their value propositions.

Hyundai is keenly aware of the challenges facing its recently minted Genesis brand. Proper management and prudent product planning could vault Genesis into the company of BMW and Lexus, but missteps could send it the way of Infiniti. The South Korean automaker’s first models, the G80 and G90 sedans are broadly praised, but legitimacy as a luxury marque will be established within more competitive segments.

Enter the G70. Genesis’ first compact sport sedan faces BMW’s 3 Series and Mercedes-Benz C-Class with high-output engines, a striking design, and extensive amenities. Our test of the G70 3.3T ($44,745) gauges the new arrival’s competence within one of the most cutthroat vehicle classes.

As the company’s volume model (at least until an SUV arrives next year), the G70 is Genesis – in both look and feel. Styling, therefore, must reflect the automaker’s aspirations.

Tidy and distinctive, the G70’s caboose is a sweet finish to a handsome exterior.

10 feet off, the G70 looks spectacular, with a wide, powerful stance, striking light signatures, and clean lines. The car’s resemblance to its larger siblings is clear, and it further defines the brand’s design language. One particular success of the G70 is its rear end styling – an area of automotive design that is commonly botched. Tidy and distinctive, the G70’s caboose is a sweet finish to a handsome exterior.

As you approach the G70, however, some aesthetic blunders come into focus. The boomerang-shaped vents of the front quarter panels, for example, are unnecessary flourishes that interrupt a slick profile. At the front, a shimmering piece of plastic is painted (unconvincingly) to match the grille’s mesh design. While necessary to house the vehicle’s radar-based driver aids, the plastic panel could have been integrated within the lower fascia to be less conspicuous. Though initially troubling, these visual discrepancies became less and less noticeable as our time with the G70 wore on.

Proving itself as a true rear-drive sport sedan, the G70 wags its tail on command and holds hilarious drifts

The cabin’s presentation is opposite that of the G70’s exterior – at first appearing underwhelming before revealing upscale touches under closer scrutiny. A driver-oriented (and somewhat utilitarian) dashboard is accented by metal-look plastics, contrast stitching, and an intuitive center stack. Diminishing the layout’s premium look is a crudely tacked-on 8.0-inch touchscreen display with thick borders and plain analog gauges.

Available quilted Nappa leather for the seats and door inserts enhances the interior vibe substantially, as does the knurled finish on the G70’s cup holders and climate control dials, extensive use of soft-touch materials, and minimal application of smudge-prone piano black trim. The G70’s wide platform lends itself to generous shoulder and elbowroom, but adult-sized rear passengers aren’t treated to much leg and headroom. The trunk, too, is cramped, with just 11 cubic feet of cargo space.

All of the basics, none of the B.S.

The sheer abundance of content within the G70 3.3T is staggering. Before tacking on any of the three available packages, customers are treated to leather seating surfaces – heated, ventilated, and power operated at the front, dual-zone automatic climate control, heated and power-folding side mirrors, an auto-dimming rearview mirror, a Lexicon 15-speaker audio system, navigation, a 7.0-inch color TFT screen, an 8.0-inch infotainment with Apple CarPlay and Android Auto, and adaptive high beams.

Also part of the standard kit is a comprehensive suite of driver assistance features, including forward collision avoidance, lane-keeping assist, blind spot monitoring with rear cross-traffic alerts, adaptive cruise control, and a backup camera. Buyers can choose to add a surround-view camera system, head-up display, and park distance alerts for a fee. Our experience with these systems is mostly positive, though the lane-keeping assistance isn’t quite as nuanced as competitor offerings.

Genesis’ infotainment system is unchanged in its transition from Hyundai vehicles, affording the same logical menu structure and respectably quick response time. In many ways, the simplicity of the G70’s module is refreshing, though there’s no denying a deficiency of screen clarity and graphic complexity compared to rival systems.

Walking the walk (and trotting the trot)

While the number of BMW customers who buy based on status now likely outweighs the crop of performance-minded shoppers, there’s no discounting the automaker’s engineering talent. To contend with the new M340i – a brilliant sport sedan – Genesis turned to ex-BMW M division head, Albert Biermann.

Beirmann has already made his mark on sister brands Kia, with the Stinger GT four-door coupe, and Hyundai, with the Veloster N hot hatch. With the Stinger GT-based G70, Biermann and his team were tasked with balancing ride comfort with classic rear-drive fun.

Our tester’s 3.3-liter twin-turbocharged V6 delivers a stout 365 horsepower and 376 pound-feet of torque to the rear wheels via an eight-speed automatic transmission. Base 2.0-liter turbo four-cylinder cars rouse a more modest 255 horses, and can be optioned with a six-speed manual. Other performance hardware on our 3.3T includes Brembo brakes and a torque-vectoring limited-slip rear differential. The Sport package adds adaptive dampers and upgrades the Michelin PS4 tires to PS4S units at the same 225-front and 255-rear widths.

From a dig, the G70 3.3T achieves 60 mph in 4.7 seconds and tops out at 167 mph. While demonstrating its straight-line speed, the G70 also showcases linear power delivery and smooth transitions between gears. The speaker-amplified (or restricted) engine noise is appealing, though there’s little character to the tune at any part of the rev range. Braking force and feel matches the G70’s impressive acceleration, with good initial bite and a progressive pedal.

Regardless of drive mode, the G70 boasts some of the best ride quality in the segment, never faltering over bumps

The G70 features several drive modes to optimize ride quality and performance for efficiency, comfort, or pace. Default comfort mode is pleasantly compliant but lazy, thanks to a dead throttle pedal. Sport quickly becomes our preferred setting for its sharp response, well-timed gear changes, and cornering composure. An unfortunate side effect of sport mode’s aggression is poor fuel economy (we averaged 17 mpg during our week with the car, undercutting the EPA’s 20-mpg combined rating). Regardless of drive mode, the G70 boasts some of the best ride quality in the segment, never faltering over bumps or succumbing to cabin harshness.

Cutting three inches from the GT’s wheelbase and 100 pounds from its mass gives the G70 livelier response and greater agility. Taking corners at speed, the G70 remains flat and predictable. Steering feedback is limited, but turn-in is sharp and rapid. Proving itself as a true rear-drive sport sedan, the G70 wags its tail on command and holds drifts with traction and stability control switched off. Whether the Genesis is as sharp as the M340i is difficult to say, but it’s arguably more enjoyable as a daily driver.

All of the Genesis G70 3.3T’s rivals are more experienced and more esteemed, but lets strip away their badges for a moment to review the specifications.

Both BMW’s M340i and Mercedes-AMG’s C43 boast more power than the G70 from their respective forced-induction six-cylinder engines, while the Audi S4 has the least output of the four. The sprint to 60 mph shows the AMG out in front (4.0 seconds) and the G70 at the back of the pack, though the G70 has the highest (unlimited) top speed. Fuel economy favors the M340i and Audi S4 at 24 mpg combined, while cargo capacity is a tie between the AMG and BMW (both offering 17 cubic feet).

At last we arrive at pricing, where the advantage shifts to Genesis. At roughly $10,000 premiums over the G70 3.3T, the BMW M340i and Mercedes-AMG C43 lean on their reputations and specs. Audi’s S4 is a few thousand dollars cheaper and includes all-wheel drive as standard (a cost add-on for the three other cars), but is still far pricier than the Korean. Load up the three Germans with equipment to match the G70 and the price gap widens considerably.

The 2019 Genesis G70 comes with one of the industry’s best warranties: basic coverage for five years or 60,000 miles, and powertrain coverage for 10 years or 100,000 miles. Other highlights include free maintenance, roadside assistance, and a valet to pick-up/drop-off your vehicle for service.

Based on the G70 3.3T’s generous standard features, we’d keep our G70 close to basic spec. Like our test car, we’d choose the Mallorca blue exterior, but paired instead with gray leather seats. With destination and handling, our configured MSRP would be $44,745.

The 2019 Genesis G70 doesn’t at all feel like a first attempt at a sporty, luxurious compact sedan. Engaging drive dynamics, a striking form, compliant ride, and plush cabin matches rivals in all but the most superficial ways. Errors of cramped rear passenger space and poor fuel economy are certainly worth noting within such a competitive segment, but they are in no way deal breakers or signs of an incompetent manufacturer.

Brand loyalty is powerful, and those already aligned with a German favorite are unlikely to trade-in for a Genesis, but the G70’s incredible value proposition – without evident sacrifice – gives it serious appeal among young and discerning buyers. This is certainly starting to feel like a Lexus success story in the making.

We think the 2019 Genesis G70 is one of the best values in the automotive market and a worthy sport sedan pick.

GMC poured all of its truck-making expertise into the Sierra EV pickup
Check out Spectre, Rolls-Royce’s first all-electric car
2023 Kia Niro EV first drive review: Practical doesn’t have to bore you to tears
Nissan wants the 2023 Ariya to be its comeback EV, but the bar has been raised
Uber says it’s investigating ‘cybersecurity incident’
Nvidia’s Drive Concierge will fill your car with screens
The Uber hack is an outrageous tale of a teen hacking for fun
Tesla to fix window software on 1M of its U.S. cars
Lux and refreshingly livable, Mercedes’ EQE moves EVs mainstream
How to watch Tesla’s AI Day tonight and what to expect
2023 Audi Q4 E-Tron first drive: the predictable and traditional EV SUV we need
We need more 7-passenger EVs, but the 2023 Mercedes EQS SUV has room to improve
Tesla AI Day 2022: Optimus, self driving cars, and everything else announced