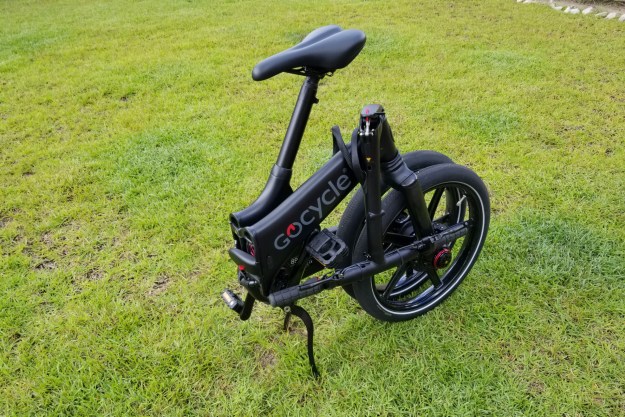 “The Gocycle GX is an attractive electric bike that's an excellent fit for urban commuters or even for casual rides around a village or town.”

Sleek, sophisticated, foldable, and portable urban transportation – that’s the Gocycle GX. The GX is a Class 2 electric bike designed for people who live and work in the city. It’ll catch your eye with its undeniably gorgeous looks, but it’s also a practical electric bike for your daily commute.

Gocycle CEO Richard Thorp left McLaren Cars Limited in 2002 to follow a dream. The former design engineer founded Karbon Kinetics to build the world’s best urban electric bike. Karbon Kinetics launched the Gocycle G1 in 2009. The G1 was the first bicycle with an injection-molded magnesium alloy frame – a process and material chosen for lightweight strength. The Gocycle G2 and G3, which launched in 2012 and 2016, were the first e-bikes with Bluetooth connectivity and a daytime running light (DRL), respectively. This year’s introduction of the GX added a fast-folding model to the Gocycle line.

The GX has a hydro-formed aluminum 6061 alloy front frame with a magnesium injection-molded drive unit. There are no chains or belts in sight, and only two short sets of wrapped cables on the folding handlebar stem.

With most components and connections integrated into the frame, the Gocycle folder has a finished and uncluttered look. This isn’t just about looks. The lack of dangling cables or chains means you can maneuver the bike in tight spaces without greasing your shins or getting snagged.

At 39.2 pounds, the GX is easy to carry for an electric bike. The Rad Power Bikes’ Radmini, for example, is nearly 30 pounds heavier than the GX. The Gocycle GX also measures a compact 34.6-inches x 15.3-inches x 24.2-inches (LWH) with its frame, handlebar, and pedals folded.

The Gocycle’s magnesium wheels mount on one side only. Called Pitstopwheels, their unusual design aids fast removal and mounting. Also, if the need arises, you can change a flat tire without taking the wheel off the bike.

You don’t have to worry about snagging cables or catching your clothes on gears.

The GX has a comfortable Velo Sport saddle mounted on an adjustable-height aluminum seat post. You can’t adjust the handlebar height on the GX, although you can on the more recently introduced GXi model. The more costly GXi version also adds a higher-powered battery, an LED light pipe facing forward on the handlebar, and a more informative handlebar display. The GX lists for $3,299, and the GXi for $4,799.

The GX handlebar has a mechanical twist shifter on the right grip to change gears on the Cleandrive Shimano Nexus 3-speed transmission. Push on the thumb throttle that sits just inside the left grip, and you can stop pedaling and accelerate, or maintain your speed with only the throttle. The throttle only works, however, after you reach four miles per hour by pedaling. The handlebar also has levers for the GX’s front and rear hydraulic disc brakes on the grips.

A series of five tiny red LEDs indicate the remaining battery charge. You otherwise don’t get any indicators, which is a bummer. Most bikes in this price range have a small black-and-white LCD with range, total mileage, and speed, among other information.

The Gocycle GX connects to your smartphone over Bluetooth and the Gocycle Connect app. The app has unboxing and setup videos, a registration function, mode settings that balance motor assistance with pedal effort levels, loads of speed, distance, and caloric statistics, plus a display with speed, distance, and power usage.

If you want all that data at your fingertips while you ride, you can attach the phone to the handlebar with an included pair of custom elastic retainers come. Once you have the GX registered and configured, you do not have to connect your phone with the bike to ride it.

Obviously, the phone app is meant to be used in place of the absent LCD display. However, after setting up the GX, I seldom used the app, other than to confirm that the e-bike could reach 20 miles per hour. Taking out my phone and attaching it was a minor hassle that often didn’t seem worth the effort.

The GX has a center stand and comes with a bell and front and rear reflectors, but no headlight or rear light. This is another feature that’s present on many competitors. Lights are important for commuting, and I’d prefer to see them integrated as part of the bike’s entry-level kit.

The Gocycle GX is easy to ride and moves quickly up to its Class 2-limited 20-mph speed. The GX’s 22-volt 13.7 Ah 300-watt Lithium-ion battery gives GX has a range of up to 40 miles per charge. Recharging takes about seven hours.

You have to pedal at least four miles per hour to access electrical power for the GX, after which you can continue to use pedal-assist or throttle mode. The Gocycle’s torque-sensing motor drive control responds to the force with which you push on the pedals to activate a proprietary 500-watt front hub motor.

The GX is light enough that pedaling without assistance is reasonably easy, at least for short distances on flat pavement. I did not spend much of my time with the bike pedaling the Gocycle, but the twist-grip shifter works smoothly to change gears if needed. For short distances, at least, pedal-power only is an option.

The GX rides on 20-inch street tires best suited for paved surfaces. You can ride on grass and other relatively smooth surfaces, but tires aren’t wide enough to handle off-road, trail, or beach riding.

You’ll want to avoid poorly paved streets, too. I discovered that when I took a turn down a cobblestone street. I quickly dismounted and walked the bike to avoid damaging the bike or myself. The frame and small wheels make for a jarring experience. A larger bike will handle bumps better, though that will of course come at the expensive of portability.

The Gocycle GX’s $3,299 price tag will give pause to electric bike shoppers who see other bikes, including folding models such as the excellent Rad Power Bikes Radmini priced half or less than the GX.

Much of the price can be blamed on top-line components such as its mechanical disc brakes and rear suspension. The more significant factor in the Gocycle e-bike pricing stems from the company’s investment in design and style. The GX uses few off-the-shelf components from other vendors. Most of the parts and systems are proprietary, or custom adapted for Gocycle.

The Gocycle GX is an attractive electric bike that’s an excellent fit for urban commuters or even for casual rides around a village or town. The bike’s sleek looks disguise the GX’s toughness, as its combination of aluminum and magnesium alloys disguise the frame and wheels’ underlying strength. At $3,299, the Gocycle GX costs a bit, but we think the investment is worth it for someone who will use the bike as essential transportation daily.

If you are the right rider for the Gocycle GX, there’s no better choice with the same combination of weight, strength, and style. The “right rider” for the GX is someone who rides on pavement most of the time and wants an e-bike for commuting that’s easy to carry and doesn’t haul a lot of cargo.

If you’re a city rider who prefers a more traditional road bike, the Raleigh Redux iE Step Over is an excellent choice. The $3,499 Redux is a Class 3 e-bike capable of 28 mph with its 350-watt Bosch Performance Speed mid-drive motor and 500-watt Bosch Powerpack battery.

If you’re in the market for a folding bike that handles all types of surfaces, we strongly recommend Rad Power Bikes’ Radmini fat tire folding bike — as long as the Radmini’s 67-pound weight isn’t an issue.

Our guide to the best electric bikes has recommendations for different e-bike styles.

The Gocycle GX should last as long or longer than most other ebikes, so it’s safe to figure on three-to-five years or longer. In addition to its high-strength structural components, encasing most of the GX’s vulnerable parts such as gears and cables protects them from accidental damage.

Gocycle’s e-bike warranty covers the battery for one year, components for two years, and the frame for three years, not including normal wear and usage. The warranty periods are for the initial purchaser; subsequent owners are covered for 50% of the first-owner warranty periods subject to the original purchase date.

Yes. If you live or work in a city where your daily route is on paved roads, the Gocycle GX is an excellent choice. The GX’s light weight, compact folded size, and ability to roll while folded pay off for storage, elevator rides, and even carrying up and down stairs.