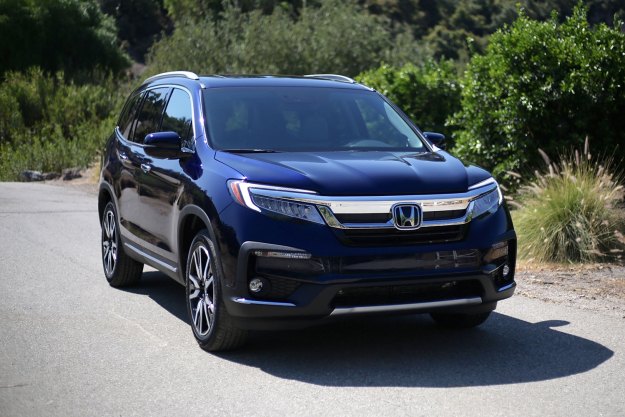 Life’s a mystery. One day you’re bungee-chording duffle bags to the roll cage of your Miata in preparation for a solo journey cross country, then, what feels like the very next day, you’re shopping midsize crossovers to accommodate your growing family. Part of you desperately wants to return to simpler times, but the other part of you knows you were kind of clueless back then. It’s best to embrace the mature you and just find an SUV with a little personality (and yes, there is such a thing).

The three-row utility vehicle segment is darn competitive, which is great news for you and bad news for most automakers. Even ultra-successful brands like Honda struggle to stand out. The current generation Pilot is a great product, with space, comfort, and power to match or best its rivals. Alas, bland styling fails to leave a lasting impression. Honda hopes to change that story by emboldening its 2019 model year Pilot, improving its tech, and increasing standard features.

Active safety for all

Active driving aids haven’t been around for all that long, yet their saturation of the automotive market has been comprehensive. From economy cars to ultra premium vehicles, driver assistance technologies are now commonplace. Honda’s decision to include its suite of active safety goodies as standard across all tiers of the 2019 Pilot is a heads-up move in our book.

Comprising the Honda Sensing package are collision mitigation braking with forward collision warning, road departure mitigation, lane keeping assist, and adaptive cruise control. Other standard features include automatic high beams and a multi-angle rearview camera. EX and above trims now get blind spot monitoring and rear cross-traffic monitoring as well. Our time in the driver’s seat lets us experience several of these features, and though some luxury brands may have smoother applications of lane keeping assist and adaptive cruise control, Honda excels within its segment.

Honda’s decision to include its suite of active safety goodies as standard is a heads-up move.

Outside the realm of safety, Honda has given its infotainment and driver display a rework to be more user friendly and visually appealing. Though not quite as streamlined as the unit in the new Accord and Odyssey minivan, the 2019 Pilot’s 8.0-inch touchscreen infotainment sees the return of the volume knob, simpler menus, and quicker response times. As before, Apple CarPlay and Android Auto are standard on EX and above trims, and a Wi-Fi hotspot is available at the Touring level.

Drivers now enjoy a 7.0-inch digital instrument cluster with customizable features. While not as striking as Audi’s Virtual Cockpit, the display is still pretty trick. In additional to typical speed and rpm visuals, the monitor can show audio, trip, smartphone, and route guidance information.

Effortless driving, whatever the conditions

When you think of the Pilot, chances are, you’re picture a Trader Joe’s parking lot or a row of tract homes as a backdrop. Indeed, errand runs and carpool duty are really where contemporary crossovers excel, but Honda wants you to think bigger, or rather, more adventurously with the refreshed model.

In addition to the highway and city routes, Honda has a groomed off-road course for us to enjoy. Dirt, rocks, deep grooves, and some steep ascents and descents are designed to show off the Pilot’s true torque-vectoring system. As opposed to brake-based or alternative torque management methods, the Pilot’s all-wheel drive setup detects the wheel or wheels without traction and reallocates power from those tires to ones with grip. We’ve seen this kind of tech on sports cars and it serves the Pilot well on the off-road playground.

Ultimately, ground clearance will determine just how far you can take the 2019 Pilot off-road, and even some of the groomed course’s troughs has the crossover scraping its plastic under-business. Power and grip, however, are impressive. As a demonstration, one of Honda’s pro drivers stops the Pilot halfway up a serious incline, takes his foot off the brake to show the vehicle’s hill-hold function, then continues up the mound with ease.

Honda wants you to think bigger, or rather, more adventurously with the refreshed model.

To accommodate the various climates and geographies its owners might encounter, Honda equips the Pilot with four drive modes: normal, snow, mud, and sand. While you might imagine the AWD system is behaving the same on any slick surface, the Pilot in fact shifts power between axles and either increases or decreases traction control to match each terrain. For example, mud and sand require momentum to avoid getting stuck, so the traction control eases off and the transmission holds gears for longer.

On road, the Pilot is as comfortable and easy to drive as ever. 280 horsepower and 262 pound-feet of torque is plenty to hustle through traffic and even tow up to 5,000 pounds. Touring trims and above come equipped with an updated nine-speed automatic that’s notably smoother and more responsive than the last time we tested this transmission. Unchanged, however, is the Pilot’s complete lack of steering feel. Turn the wheel and the SUV heads in that direction, apparently, because the scenery changes – not because the front tires are telling you anything.

The most efficient version of the Honda Pilot, a front-drive model with a nine-speed automatic, earns 20 mpg city, 27 highway, and 23 combined (figures that trail only the Mazda CX-9 in the segment). We expect most buyers will option all-wheel drive, however, which cuts 1 combined mpg for nine-speed models and 2 mpg for six-speed versions.

It’s clear the Pilot can hack it off-road, but few consider taking it there because it doesn’t look capable.

Honda’s tweaks to the 2019 model’s exterior focus on toughness without altering its family-friendly demeanor. In truth, few commuters will be able to spot the differences, but the freshened Pilot is subtly more confident.

In truth, few commuters will be able to spot the differences, but the freshened Pilot is subtly more confident.

Inside, the changes are even more understated. There’s new trim around the vents, wider fold-down armrests for front passengers, available second-row captains chairs for both Touring and Elite trims, and retractable sunshades for EX-L and above models. Cargo capacity remains at a substantial 16.5 cubic feet of space behind the third row, 46.8 cu. ft. behind the second row, and 83.9 cu. ft. with both second and third row stowed.

All told, the Pilot’s interior is high quality and, in Touring and Elite grades, upscale for the segment. While not as striking as, say, the CX-9’s Signature Edition, we wouldn’t mind taking a long road trip in these digs.

Honda offers a three-year or 36,000-mile factory warranty, plus a five-year or 60,000-mile powertrain warranty. Like Toyota, Honda is renowned for its vehicle reliability, so owners should have peace of mind when purchasing a new Pilot. Routine maintenance should keep any new Honda on the road for many years to come.

Though the 2019 model year Pilot has yet to be scored by the IIHS and NHTSA safety rating agencies, it should match the 2018 model year’s Top Safety Pick Plus (IIHS) and 5-star (NHTSA) marks.

The list of options in this people-mover segment is dizzyingly long, but if we’re to cut it down to some close rivals, the 2019 Honda Pilot fares well against the Toyota Highlander, Mazda CX-9, and Ford Explorer. The Highlander starts at a fractionally lower price tag, the CX-9, with its four-cylinder engine, has 1 mpg better combined fuel economy, and the Ford Explorer looks more rugged. The Pilot, meanwhile, is effortlessly capable, supremely comfortable, high quality, and offers loads of passenger and cargo room.

Our perfect Pilot takes the form of a Touring trim with all-wheel drive ($1,900). Outside, we dig the black forest pearl paint; inside, we’re stuck with beige leather interior. Throw some factory crossbars ($225) on the roof because you know we’re taking this thing camping, and call it a day. The Pilot Touring’s long list of standard goodies, like a hands-free power tailgate, Apple CarPlay, Android Auto, Wi-Fi hotspot, heated front seats, 10-speaker premium audio system, Navigation, CabinTalk, LED headlights, auto-dimming rearview mirror, three USB ports, and Honda Sensing mean we don’t need to add much to its base configuration. Our price with options and destination fees is $45,640.

On the surface, little about the Honda Pilot has changed, but small tweaks here and there add up to one of the best three-row SUVs you can buy. From what we’ve seen of the striking new Civic and Accord, Honda designers could take the Pilot’s exterior design a step or two further without upsetting anyone, but perhaps that’s just our younger, Miata-driving selves talking. When the substance beneath the sheet metal is this good, we find it’s best not to be picky.