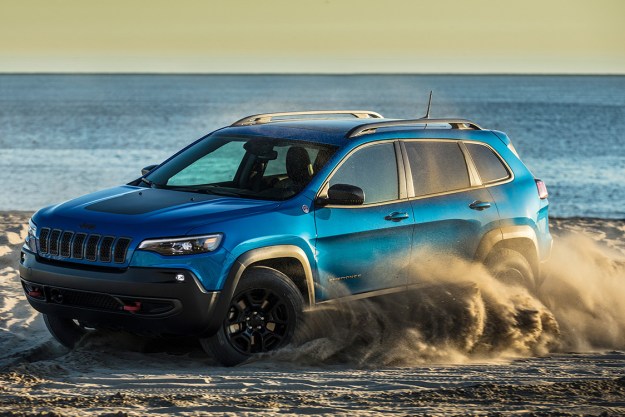 “The styling may be softer, but the Cherokee retains its off-road grit.”

When Jeep introduced the fifth-generation Cherokee in 2014, Jeep purists cringed. The truck-like underpinnings that made the Cherokee a legend among 4X4 enthusiasts was gone, replaced by the same compact car platform used in the now-discontinued Dodge Dart and Chrysler 200. Then there was the styling. With a pinched front nose and odd, squinty headlights, the exterior design was polarizing to say the least.

But then we drove it, and to make a long story short, the Cherokee’s manners and capability exceeded our expectations both on and off-road.

The Cherokee can range from utilitarian to legitimately upscale.

For 2019, Jeep seeks to play on the Cherokee’s strengths while rounding out the rough edges, tweaking the aesthetic, expanding the power train options, and bolstering its utility to keep it relevant in the hotly-contested crossover segment.

But from a glance, the first thing you’ll notice is the updated face. It now sports more traditional-style headlights, and LEDs are now standard across the Cherokee lineup from the headlights to the fog lights and tail lights. A new back-end design also relocates the license plate to the tailgate rather than the bumper to balance out the look.

Jeep builds the new Cherokee in five different trim configurations: Latitude, Latitude Plus, Limited, Overland, and the off-road-focused Trailhawk. We spent our seat time in the latter, both traversing the winding Malibu tarmac and tackling the off-road trails found on the Calamigos Ranch facility. A base model Cherokee will set you back $25,190, while the MSRP for the Cherokee Trailhawk starts at $34,515.

Depending on trim level and the equipment selected, the Cherokee can range from utilitarian to legitimately upscale, with optional features like a dual-pane sunroof, heat and ventilated seats, and FCA’s proven Uconnect 8.4-inch touchscreen infotainment system bringing a premium vibe to the compact crossover. Some of the plastics will still remind occupants of the vehicle’s mid-$20K starting price, but on the whole, the interior fit and finish are above par for the segment.

While passenger space remains unchanged from the previous model, rear cargo capacity has been increased by roughly three inches in width, now offering more than 27 cubic feet in total.

The Cherokee’s ability to dispatch challenging terrain is awe-inspiring at times.

Our Trailhawk was outfitted with the new boosted mill, which is short one pony of the naturally aspirated V6, but bests it in peak torque by a healthy 56 pound feet, and delivers gutsier mid-range pull in general.

Jeep explains that the nine-speed gearbox has been “tuned to match the performance of all-new 2.0-liter,” and while it behaves better than we’ve seen in the past, there are still times when the transmission seems a step or two behind the power, either unwilling to downshift in some situations or over-doing it in others. It’s a solid combination under the right circumstances though – acceleration is brisk on-road, and the Trailhawk’s four-wheel drive system gets along well with the motor when barreling down the trails or crawling through deep ruts.

On the street, the Cherokee’s manners remain agreeable – the cabin is relatively quiet, the driving position is comfortable, and power delivery from the new 2.0-liter is ample, while keeping the four-cylinder buzz to a minimum. Corner carving has never been a focal point of Cherokee design, and that remains true here – the quest for amenable ride quality and overall accessibility trump handling precision. While Overland models were provided for our street drive rather than the Trailhawk-trimmed Cherokees we used off-road, it’s reasonable to expect that the driving experience with the latter would be much the same, albeit with some increased road noise from the all-terrain tires and a slightly harsher ride due to the beefed-up suspension.

Still, where the Cherokee proves to be a true standout in the crossover segment is when it is outfitted in Trailhawk guise and unleashed on the trails. Though it’s still not on par with the capability of the Wrangler Rubicon, which offers significantly more wheel articulation and is equipped with off-road-focused rubber, the Cherokee’s ability to dispatch challenging terrain is awe-inspiring at times. Much of the credit has to be awarded to the Selec-Terrain system, which seems to know exactly where to send the power at all times in order to get the Cherokee up and over obstacles that sometimes appear well outside its scope of capability, let alone that of its rivals in the crossover segment.

Fuel economy for the Cherokee Trailhawk equipped with the 2.0-liter engine is officially rated at 20 mpg city, 26 mpg on the highway, and 22 mpg in combined use. Expect significantly higher numbers if you don’t opt for the Trailhawk’s beefed-up four-wheel drive system.

The Cherokee comes with a three-year, 36,000-mile bumper-to-bumper warranty and a five-year, 60,000-mile powertrain warranty.

The Trailhawk is an agreeable cruiser on-road as well, provided you’re willing to compromise a bit on the handling and fuel economy.

While trim levels like the Limited and Overland offer posh luxury appointments, Jeep is the wrong nameplate for that kind of ride. We would instead turn to Jeep for its legendary off-road capability, and in this segment, the Cherokee Trailhawk is simply unrivaled in its capability out on the trail. Its advanced Selec-Terrain system and mechanically locking rear differential take this crossover places that continually exceed our expectations – it’s here where the Cherokee stands out among other crossovers. And despite the off-road focus, the Trailhawk is an agreeable cruiser on-road as well, provided you’re willing to compromise a bit on the handling and fuel economy.

While the Cherokee remains a viable crossover for school drop-offs and Target runs, it’s the available off-road capability that allow the Cherokee to truly separate itself from the pack. The styling may be softer, but the Cherokee retains its off-road grit.

This year’s design tweaks, new power plant, and reworked packaging are all welcome changes, even if a few areas still show room for improvement. Crucially, the availability of the robust Uconnect infotainment system and the Cherokee’s suite of active safety features means that buyers don’t have to make sacrifices in technological capability to get a rugged crossover, and now with the more traditional face of the 2019 Cherokee, they won’t have to compromise on the look anymore, either.