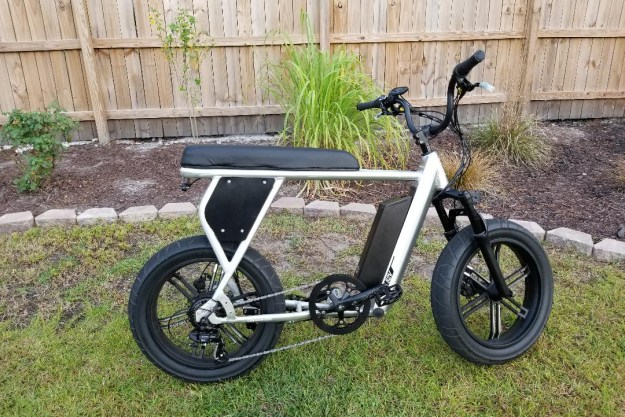 “The CityScrambler's unpretentious style conceals strength, comfort, and speed, all of which contribute to a fast, fun ride.”

What if you just want to have fun?

Urban commuter e-bikes, e-mountain bikes, performance track bikes, cargo bikes, and folding e-bikes each have specific requirements built to enable a specific purpose. Buying for purpose has its place. But what if all you want is a good time? That’s where the Juiced Bikes CityScrambler comes in.

The CityScrambler is a pavement-centric electric adventure bike. The other two Scramblers, the CampScrambler and HyperScrambler, are better set up for off-road riding. The CityScrambler is available with two battery sizes. I picked out the larger battery, a 52V 19.2 Ah rechargeable Lithium-ion power pack that weighs almost 13 pounds. The larger battery pack adds about 50% more traveling range than the standard 13.0 Ah battery.

E-bike travel range has many variables, including temperature, wind, pavement, incline, rider and payload weight, tire pressure, speed and speed consistency, and the relative amounts of pedaling with pedaling assist levels and throttle-only operation. Juiced Bike’s real-world battery test results sheet shows the travel distance range from 31 to 114 miles with the 13.0 Ah battery and 45 to 168 miles with the 19.2 Ah battery.

The CityScrambler and CampScrambler cost the same, $2,199 list  (frequently discounted to $1,599) with the 13.0 Ah battery or $2,799 (often cut to $2,099) with the 19.2 Ah battery. These nearly identical models are set up with a custom 750-watt Bafang rear hub-drive motor, a cadence pedal assist sensor, and front coil suspensions.

HyperScrambler, the third model in the Juiced minibike series, speeds up to 35 mph – which is only legal on private roads. This model has an 1100 watt hub drive, a unique combination torque/cadence pedal assist sensor, and a front fork air suspension. The HyperScrambler also has spoked wheels and knobby tires and lists for $3,899 (usually discounted to $3,499).

Here’s more perspective on the brand: Juiced Bikes has several different e-bike models, none of which are Class 1 or Class 2. Of the ten currently available Juiced e-bikes, seven have 28 mph top ends. The other three? Well, they’re faster — to 35 or 40 mph — but the legal use for those speeds is on private roads only. Juiced Bikes makes electric skateboards and stand-up scooters that top out at 16 to 20 mph, but all Juiced e-bikes are capable of at least 28 mph.

Juiced Bikes makes electric skateboards and stand-up scooters that top out at 16 to 20 mph, but Juiced e-bikes are all capable of at least 28 mph

Why does Juiced Bikes only make fast e-bikes? Perhaps it’s because Juiced Bikes founder and CEO Tora Harris is an Olympian high jumper, a four-time national champion, and two-time bronze medalist in international competition. From my perspective, his competitiveness is our gain.

Speed is a vital fun factor, but not the only reason the CityScrambler qualifies as a top fun e-bike.

Your neighbors will smile

Let’s start with neighborhood-friendliness and comfort, both secondary fun factors on which the CityScrambler excels, before moving on to speed and handling.

The CityScrambler’s retro minibike style elicits smiles as you ride around.  Many people remember tiny minibikes noodling around the neighborhoods of their youth. Most people don’t realize the CityScrambler’s seat height is 31-inches from the ground – or almost six inches higher than a stock 2020 Harley-Davidson Iron 883 Sportster, but the Juiced Bike scores on neighbor-friendliness.

Comfort matters too when you want to have fun. We’re not talking easy-chair cushy, but good none the less. The CityScrambler’s long, comfortable seat, adjustable front coil-suspension forks, and bump-forgiving air-filled fat street tires all contribute to a smooth ride — as long as you don’t stray onto rough terrain. With this comfort, if you don’t get beat up by your journey and your legs and battery power hold out, you can have fun longer.

Most e-bikes sold in the U.S. are Class 1 or Class 2, but the CityScrambler is a Class 3 e-bike with a controller-limited 28 mph top speed. You can’t use the throttle alone for power above 20 mph with a Class 3 bike, but if you pedal even just a little bit while continuing to twist the throttle, you can get use the battery to speed up to 28 mph.

The CityScrambler has a Shimano 7-speed freewheel gear set. I found it surprisingly easy to pedal with the power turned off or with the assist model set to zero.

The higher the compression, the more the suspension smooths over bumps as you ride.

There are seven pedal assist modes: zero for no power; ECO, with just enough assistance to make up for the bike’s weight when pedaling; levels 1,2, and 3, each with successively more power assistance, S (Sport) for full power up to the legal limit; and R (Race mode). Race mode doesn’t limit the e-bike’s speed, but won’t allow it to go faster than the preset motor controller configuration.

When you travel even at a moderate speed on a relatively lightweight e-bike, frame strength matters. The 78-pound CityScrambler has a 6061 aluminum frame, which, according to Juiced Bikes, is both T4 and T6 heat treated. 78 pounds might sound like a lot, and it is, though it’s a matter of perspective. This is a heavyweight for an ebike. However, as you can tell from looking at it, this is not the usual ebike, but instead a cross between that and an electric motorcycle. Still, the weight does matter. Hauling this bike up stairs could be a hassle. Moving over curbs is made easier because there are plenty of places to grab the frame to leverage the weight.

In classic minibike form, the CityScrambler has a banana-style seat. The seat is 24-inches long, 3.5-inches thick (except for a few inches at the front where it tapers a bit), and 4.5-inches to 5.5-inches wide. In my experience riding the CityScrambler on and off-pavement and over lots of curbs, the seat contributed a great deal, not only to riding comfort but also to balance and control.

The frame is configured to fit riders 5-foot 4-inches and taller. The handlebars adjust closer or further away from the rider, and the long seat lets you find a comfortable position. Riding with the banana-style seat, I realized I was riding it like a motorcycle, shifting my body weight for corners.

Fat tires soften the ride when properly inflated. If you inflate the tires to their maximum rating, you won’t benefit as much from the suspension-effect. The CityScrambler’s Innova street tires are rated for a maximum of 35 psi, but Juiced recommends adjusting them to 25 psi. After the initial adjustment, I never had to add or release air pressure.

Speed is an important fun factor, but not the only reason the CityScrambler qualifies as a top fun e-bike

A 1050 lumen LED front headlight is standard. The CityScrambler and CampScrambler currently ship with an AA battery-powered tail light, but the HyperScrambler tail light connects to the main battery and also acts as a brake light. The separately powered tail light is a minor bummer. It would make more sense to have it integrated from the start.

Talking with Juiced technical support, I learned there was a Hyper Tail Light accessory kit for $34 that was still in testing for the City and CampScrambler. Juiced sent me the package, and once installed, which took just a few minutes, the brake light worked perfectly. If you buy a Scrambler without the brake light, I highly recommend spending the extra $34.

To operate the CityScrambler, first press a button on the battery case. A green light appears immediately, and the next step is to press a power button on the back of the LCD module mounted near the left handgrip. You can then select a pedal-assist mode or turn the motorcycle-style twist-grip throttle on the right handgrip and take off. As with all e-bikes, take off is immediate when you use the throttle, so be ready. There is no throttle lockout button or switch on the CityScrambler, so be careful not to twist it before you’re ready.

I didn’t measure the sound of the CityScrambler motor, but it was noticeably quieter than other e-bikes I’ve ridden. Like other e-bikes, the sound is a high-pitched whining, but in this case, it’s a low volume whine. I also found it was easy to modulate the speed with the throttle.

The CityScrambler’s extra speed above 20 mph helped when traveling on secondary roads in our exurban town. During a 10-mile ride on a secondary road with a 45 mph speed limit and most traffic moving closer to 55 , the ability to maintain 25 or a bit above as I rode the white line on the side, gave me a better feeling of confidence than traveling the same road with e-bikes limited to 20 mph.

The Juiced Bikes CityScrambler is built solidly, can go faster than most e-bikes, handles well, and relatively comfortable. Those factors add up to a confident, fun ride. Motorcycle riders and people who had minibikes back in the day may enjoy riding the CityScrambler more than bicyclists who prefer a taller, more conventional bike configuration. Still, the CityScrambler is easy to ride, easy to live with, and approachable fun.

The City Scrambler holds its own against any minibike-style e-bikes currently on the market. Lithium Cycle’s Super 73‘s ebikes are a close relation in appearance, although there’s no exact match in the line.

If you broaden the scope a bit to include moped-style e-bike and minibike models, Rad Power Bikes’ RadRunner and Juiced Bike’s own Scorpion and HyperScorpion deserve comparison with the CityScrambler. The RadRunner is a value-priced utility bike designed for customization with a wide range of accessories. The regular Scorpion and rev’d up HyperScorpion, currently in a crowd-funding campaign, are just beginning production, with shipments estimated to start by March 2020.

The RadRunner, Scorpion, and HyperScorpion are step-through models and in that respect, somewhat more complicated in design and more purpose-built than the fun-loving CityScrambler. We have a RadRunner for testing and review, and Juiced has promised a production-spec Scorpion to test in another month or so. Because simplicity is part of the CityScrambler’s appeal, we don’t see any of the other alternative topping the Juiced minibike for pure fun.

Juiced Bike warranties its e-bikes for one year. Because of the CityScrambler’s simplicity, rugged build, and industry-standard components, we would expect it to last at least 3 to 5 years. In that time, you would probably need to replace tires and brake pads, and, if you rack up lots of mileage, maybe a new battery.

Yes, you should absolutely buy a CityScrambler if you want a comfortable, fast, fun ride. If you plan regular trips longer than 10 to 12 miles each way, we recommend buying the model with the 19.2 Ah battery for its longer range.