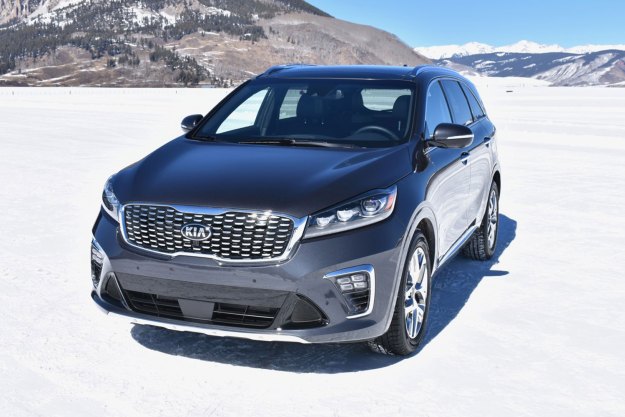 “Rather than changing the game, the Sorento just plays it really well.”

The current-generation Kia Sorento has been around for a few years now, but it needed an update to stay relevant in the popular midsize crossover segment, which now includes not only stalwarts like the Honda Pilot, Toyota Highlander, and Ford Explorer, but also newcomers like the Volkswagen Atlas and Subaru Ascent.

To keep up with the competition, Kia tried to sharpen up the Sorento’s driving dynamics by handing this seven-seat SUV over to Albert Biermann, the BMW M veteran who just got finished tuning the handling of the sporty Kia Stinger. Some new tech features and minor styling tweaks round out the changes.

The 2019 Sorento comes in five trim levels: L, LX, EX, SX, and SX-Limited. Kia hasn’t finalized pricing, but a base Sorento L with front-wheel drive is expected to start at around $26,000. A fully-loaded all-wheel drive Sorento SX-Limited model, like our test car, will sticker for around $45,000. This top-of-the-line Sorento lives up to that lofty sticker price thanks to a generous list of tech and convenience features.

The Sorento’s interior has a pleasing, minimalist design. The central touchscreen doesn’t awkwardly jut out from the dashboard, as these things often do, and it’s backed up with just the right number of analog buttons and knobs. A tray in front of the shifter includes two 12-volt outlets, a USB port, and an auxiliary jack, plus the new-for-2019 Qi wireless charging pad. Another USB port lives in the center console, but the lid pinches charge cords when closed. Second-row passengers get two more outlets, located on the back of the center console.

The quality of interior materials is pretty good for a mainstream vehicle, but Kia stretches its credibility in a few areas. While the seats in our SX-Limited test car were leather, almost everything else was plastic. That’s fine closer to the Sorento’s base price, but a little less acceptable at the roughly $45,000 price of our test car. The piano-black plastic trim on many surfaces looks like it will smudge or scratch easily. Our test car had fancy-looking stainless-steel pedals, but looking past them we found that the base of the steering column was left exposed.

The 2019 Sorento comes standard with a 7.0-inch touchscreen infotainment system, but we got to sample the optional 8.0-inch system, which also includes navigation. Apple CarPlay and Android Auto are standard across the board. Kia’s UVO 3.0 system isn’t a game changer, but the responsive touchscreen and clear graphics handle the fundamentals well. Higher trim levels also get a 7.0-inch LCD screen in the instrument cluster. Our test car had the optional Harman Kardon surround-sound system, which produced crisp sound consistently throughout the cabin.

Seven-passenger seating is standard across the board, with generous headroom throughout thanks to the Sorento’s tall, upright profile. Rear-seat legroom is a bit tight, though. We didn’t get to test out the third row, as the seats were folded up to accommodate three journalists’ worth of luggage and the snow chains mandated by the state of Colorado, where we drove the car. Overall, the Sorento offers significantly less cargo volume than a Honda Pilot, Toyota Highlander, Ford Explorer, or VW Atlas.

The Sorento is available with an array of driver-assist features, but none of them are standard equipment. For 2019, lane-keep assist and a driver-attention monitor join an existing roster of features including adaptive cruise control, blind-spot monitoring, lane-departure warning, parking sensors, and a 360-degree camera system. Adaptive cruise control can bring the Sorento to a complete stop and then resume driving, with smooth, gradual deceleration and acceleration that should put vehicle occupants at ease.

The Sorento is built for hauling people, not setting lap times, but Kia did try to make it more engaging to drive than the average family crossover. Performance guru Albert Biermann made some tweaks for 2019, and the optional all-wheel drive system includes brake-based torque vectoring. This uses the brakes to shunt power around in order to help turn the car into corners.

Some twisty Colorado roads gave us plenty of opportunities to test out the Sorento’s handling, but we didn’t see much impact from those performance-enhancing features. The steering is fairly precise, but still tunes out most of the feedback from the road. Body roll was fairly controlled for such a large vehicle but — even with torque vectoring — the Sorento didn’t feel any more nimble than any other SUV of its size. The suspension did soak up bumps nicely, and that’s probably more of a priority for drivers of this type of vehicle.

The V6 felt perfectly adequate in terms of power, but lacked refinement.

Our Sorento SX-Limited test car was equipped with the optional 3.3-liter V6, which produces 290 horsepower and 252 pound-feet of torque. The V6 is mated to an eight-speed automatic transmission developed in-house and shared with the Cadenza sedan. Kia also offers a 185-hp 2.4-liter four-cylinder engine and six-speed automatic in base models.

The V6 Sorento offers more power than most other vehicles in its class, but loses out to the Toyota Highlander (295 hp) and Chevrolet Traverse (310 hp) V6 models, as well as the 365-hp twin-turbocharged EcoBoost V6 available in the Ford Explorer. An eight-speed automatic is also pretty good for this segment, although Honda does offer a nine-speed automatic in the Pilot.

On the road, the V6 felt perfectly adequate in terms of power, but lacked refinement. Power delivery was coarse, and the engine note wasn’t exactly inspiring. The new eight-speed automatic could also use a bit more polish, as some shifts felt a bit rough.

All Kia models have a 10-year/100,000-mile limited powertrain warranty, and 5-year/60,000-mile limited basic warranty covering everything other than the powertrain. Overall, Kia has built up a fairly good reputation for reliability over the past decade, but the outgoing 2018 Sorento only received an average reliability score from Consumer Reports.

The EX trim level seems to be the sweet spot in the 2019 Sorento lineup. It includes the V6 engine (which we think is a better choice than the standard four-cylinder in a vehicle this large), as well as adaptive cruise control, heated leather front and second-row seats, and a power folding second row. We’d also spec the Harman Kardon audio system and 8.0-inch touchscreen, which are optional on this trim level. Doing that should yield a decent amount of useful features at a lower price than the top SX-Limited model we drove.

The 2019 Kia Sorento doesn’t try to change the game, it just plays it really well. It offers the generous array of features that’s become typical of Kia, reasonably competent driving dynamics, and a handsome, albeit understated, design. It’s a solid contender that’s definitely worth a look.

Check out Spectre, Rolls-Royce’s first all-electric car
2023 Kia Niro EV first drive review: Practical doesn’t have to bore you to tears
Nissan wants the 2023 Ariya to be its comeback EV, but the bar has been raised
We need more 7-passenger EVs, but the 2023 Mercedes EQS SUV has room to improve
The Uber hack is an outrageous tale of a teen hacking for fun
Tesla to fix window software on 1M of its U.S. cars
Lux and refreshingly livable, Mercedes’ EQE moves EVs mainstream
How to watch Tesla’s AI Day tonight and what to expect
2023 Audi Q4 E-Tron first drive: the predictable and traditional EV SUV we need
Tesla AI Day 2022: Optimus, self driving cars, and everything else announced
Tesla hopes full self-driving beta will be out globally by the end of 2022
Elon Musk reveals first delivery date and customer for Tesla Semi truck
Make your car smarter with an Echo Auto — just $15 today