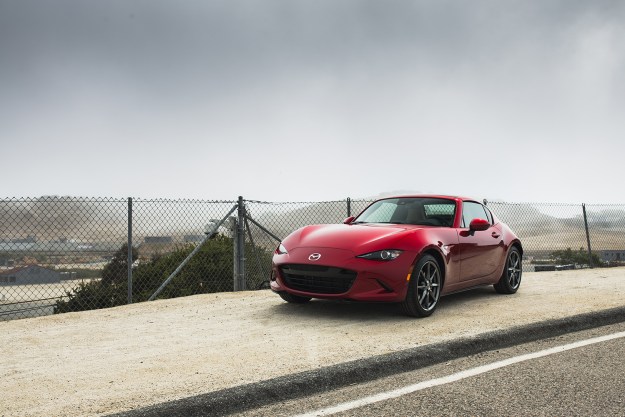 “The Miata remains the epitome of fun on four wheels and it just got even better.”

In a world dominated by land yachts and giant SUVs, small, compact lightweight sports roadsters seem more distant than a government being in touch with its people. So while joining a group of other automotive journalists – who also happen to be former or current Miata owners, or just fans –  for a road trip up the California coast from San Luis Obispo to the greater San Francisco Bay Area to test the latest Mazda Miata, it felt like being as much of an outcast.

But every time one gets behind the wheel of a Mazda MX-5 Miata, it all comes together to make a lot of sense as to why it’s the world’s best-selling sports car. The Miata remains the epitome of fun on four wheels. It’s proof that keeping an unnerving smile plastered onto your face doesn’t necessitate the need for money and power.

Say what you will about all the stereotypes that might exist for the Miata. But the truth is that none of them matter once you’re in the captain’s seat and wringing out all the Miata has to offer up the squiggliest line you can find on Google Maps.

The 2019 Mazda MX-5 Miata might look the same as it did when it first came out in 2016. But Mazda touts many of the changes applied underneath amount to an even better Miata than when originally released. As the only sports roadster available in its class and at its price, can the latest and greatest Miata continue to carry the torch of supremacy?

Make no mistake, the Miata’s never been friendly to those over six feet tall. So unless you’re ok with your hair becoming a bug net every time you drive, the Miata isn’t for you. My 5’11 figure just hardly made it into the intimate confines. If you’re not riding alone, you’d want to be in a social mood with your co-pilot. Neither should find complaints in the comfort department for any more than a few hours on the road to your weekend destination. Otherwise, be prepared for some awkward elbow rubbing and silence.

Unlike in a flamboyant Audi or Lexus where technology is in your face, the Miata’s cockpit is extremely simplistic in comparison. For instance, the gauge cluster – you’d never guess it – has actual analog gauges, instead of some fancy gajillion-color liquid crystal fusion display. The fanciest of them all would be for the main infotainment system, while monochrome LCDs sit in the gauge cluster to share the most pertinent of information.

The Miata is proof that keeping an unnerving smile plastered onto your face isn’t inaccessibly exclusive to money and power.

It may not show on the surface, but technology is aplenty in the MX-5 Miata. The Miata is just as purely driver focused as a car can get in 2018 and doesn’t allow technology to interfere with the driving experience. Instead, it’s integrated seamlessly to enhance it or simply make it safer.

There are some equipment changes. For example, the Miata might’ve been one of the last of its kind to feature an in-car CD player as that goes away for all models. In favor of it is a new standard rear-facing reverse camera; and optional Smart City Brake Support or pre-collision assist, and Traffic Sign Recognition for the top-range Grand Touring models as apart of the latest i-ACTIVESENSE package.

As anyone who’s driven a Miata knows, this car isn’t small just to be cute. It’s a representation of pure driving fun, with as little distraction and excess as possible, combining the experience of a pure sports roadster with everyday usability.

Because of its small proportions, the tiniest of adjustments at the R&D side make for the biggest changes with how the car handles and behaves. It’s a constant battle between packaging and managing one key aspect: weight. Engineers have already gone crazy lengths to keep the Miata as light as possible. For the update, engineers event went more crazy, a part of its “SKYACTIV Technology” theme, which is like Mazda’s own weight-watchers program.

Thus, with Mazda revising the original 2.0-liter and squeezing out 26 additional horses for a total of 181 (versus 155) and three more torques (151 lb-ft), the differences could instantly be felt behind the wheel if one has experience with earlier models. The original Miata had an unusually low 6,800 RPM redline, forcing frustratingly frequent shifting between second and third gear on windy backroads, just to stay in the mill’s narrow powerband.

With the new revisions, revving the crap out of the four-cylinder to its newfound heights of 7,500 RPM will make anyone love every revolution of it. Eating up some of the windy roads around Lake Nacimiento and up towards the Big Sur, just south of Monterey, the extra mid-to-top-range power really made it worth working the engine for it.

When it comes to pure, unadulterated fun on four wheels, it doesn’t get any more iconic than the Miata.

With Mazda’s chief engineer for vehicle dynamics and engineering, Dave Coleman, explaining in the presentation before the drive, it’s all in the details. Engineers lightened the four-banger’s piston heads by 27 grams (less than 0.6 pounds) and connecting rods by 41; increased the size of the throttle body; enlarged the valves; and reoptimized air- and fuel flow.

It may not yield drastic changes to straight-line speeds. Instead, it’s all about the way the engine delivers its power, feeling much more responsive in the subtlest of ways while offering more flexibility with what gear you’re in. Especially if you’re hustling the car. With the Miata’s legendary connected and sharp handling, and flawlessly balanced platform, the best simply just got much better.

Having spent time not just loving the soft top, but in the Miata RF with its power-retractable targa roof, the heavier Miata RF did feel less aggressive and softer in the corners than the roadster. And the raised cowl behind the rear seats where the soft top would normally fold in causes a lot of turbulent wind noise. But nonetheless, the RF kept the smile plastered on my face whipping it up Route 9 to Route 35 through the Skyline Ridge just south of San Jose.

All 2019 Mazda MX-5 Miatas come with a three-year, 36,000-mile bumper-to-bumper warranty with a five-year, 60,000-mile warranty on the engine and transmission. Mazdas also hold a reputation for being another reliable Japanese automaker. Though on J.D. Power’s Initial Quality Survey for 2018, Mazda still sits above the industry average for the higher problems per 100 vehicles but is ahead of Honda.

Another change for 2019 Miata buyers is more flexibility with configurations. We’d opt for the midrange Club model which already gets the best suspension arrangement (sport-tuned Bilstein shocks) and a mechanical limited slip differential from the optional GT-S package on the Grand Touring.

Although we love technology here, the Miata is more about the pure driving experience and so all of the driver aids you do find on more luxurious vehicles are more of an intrusion than anything. And because the Miata is a dwarf compared to most other cars on the road, there’s plenty of outward visibility. So we’d do without the optional i-ACTIVSENSE package on the Club model and pocket the extra cash for another leisurely weekend.

When it comes to pure, unadulterated fun on four wheels that doesn’t demand a premium, it doesn’t get any more iconic than the Miata. Not only because it’s been the go-to modern compact sports roadster since fuel injection became a thing. But if anyone wants to know what fun behind the wheel is, without entering the premium market, sacrificing everyday usability, or being incredibly overwhelming, it doesn’t get any more ideal than the Miata.

The next closest convertible option would be the Mazda MX-5 Miata’s Italian cousin, the Fiat 124, which literally is a Miata underneath. If you want a slightly more luxurious take on what’s already the standard, the 124 might interest you more. Otherwise you’ll have to start considering the significantly larger American pony convertibles, the Ford Mustang and the Chevrolet Camaro. And they’re completely different beasts altogether.