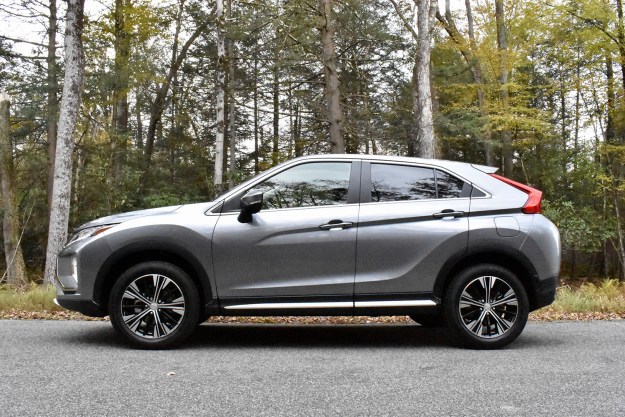 “The 2019 Mitsubishi Eclipse Cross is a solid effort, but fails to stand out from the crossover crowd.”

Mitsubishi was once a big-time automaker mentioned in the same breath as fellow Japanese firms Honda, Nissan, and Toyota, and in that golden age the Eclipse was one of its coolest cars. The two-door coupe/convertible became a star of The Fast & The Furious and an icon of tuner culture. So, what’s the Eclipse name doing on a crossover?

It may seem like epic trolling, but the 2019 Eclipse Cross is Mitsubishi’s attempt at a comeback. While Mitsubishi is a shadow of its former self, it hopes to use the current crossover craze to return to relevance. Instead of a sporty new two-door, buyers get a small utility vehicle aimed at models like the Jeep Compass, Nissan Rogue Sport, and Subaru Crosstrek.

Digital Trends drove the Eclipse Cross in two very different environments: in the bowels of New York City’s Manhattan borough, and on the winding roads near the town of Monticello, north of the city. Mitsubishi offers the Eclipse Cross in ES, LE, SE, and SEL trim levels. The base ES starts at $24,590 with front-wheel drive. We drove an all-wheel drive SE model that included additional features like heated front seats, blind spot monitoring, and rear cross traffic alert for $28,015 All prices include a mandatory $995 destination charge.

The Eclipse Cross’ interior is best described as “middle of the road.” The design and material quality don’t impress, but they don’t offend either. We did find the driving position fairly comfortable, and the seat isn’t as jacked up as it is in many crossovers.

Though Mitsubishi gave the Eclipse Cross more expressive styling than most crossovers, that comes at a price. Outward visibility was better than we expected given the sloping roofline, but not great. We definitely would have preferred a less limited view out while fighting our way through New York City traffic. Despite the name, the only boy racer thing about the Eclipse Cross is the bar that separates the two halves of the rear window, which blocks your view just like the rear spoiler on an old-school Eclipse or Lancer Evo.

Passenger space is comparable to competitor models like the Jeep Compass, Nissan Rogue Sport, and Subaru Crosstrek, but the Mitsubishi offers the least cargo space of the group. However, when it comes to passenger and cargo space, these vehicles are more like hatchbacks than traditional SUVs. The Crosstrek is in fact just a Subaru Impreza hatchback with a raised ride height and more rugged styling.

The 2019 Eclipse Cross is Mitsubishi’s attempt at a comeback.

Mitsubishi’s infotainment system uses a 7.0-inch display screen perched atop the dashboard with touch controls around its border, and a laptop-like touchpad controller on the center console. The latter allows the user to scroll left and right or up and down by swiping across marked areas of the pad. The system is standard on all trim levels except the base ES, and it includes Apple CarPlay and Android Auto. SEL models get a head-up display.

In practice, this system leaves a lot to be desired. Mitsubishi did not include a volume knob, and the volume touch points are located on the opposite side of the screen from the driver, requiring an awkward reach to turn the sound up or down. The screen itself is too small and information is displayed in a disorganized manner. We’d prefer a larger, more centrally located screen to tap on directly or, better yet, more physical buttons and knobs.

The Eclipse Cross is the first model to get the Mitsubishi Connect telematics service, which includes features like remote control of door locks, horn, lights, ignition and climate control, and parental controls (geofence, speed and curfew alerts). The service can also connect the driver with a call center in the event of an accident or other emergency, similar to General Motors’ OnStar.

The sole available engine in the 2018 Mitsubishi Eclipse is a 1.5-liter turbocharged inline-four, coupled to a continuously variable transmission (CVT). Front-wheel drive is standard, but all-wheel drive is optional.

At high revs the engine makes an unpleasant grumbling sound, like it’s not having fun.

The engine produces 152 horsepower and 184 pound-feet of torque. That’s substantially more than the 141 hp and 147 lb-ft you get from the Nissan Rogue Sport’s naturally aspirated 2.0-liter inline-four. The Subaru Crosstrek’s boxer-four engine matches the Eclipse Cross in horsepower, but lags behind in torque at 145 lb-ft. The Jeep Compass’ 2.4-liter inline-four offers more power (180 hp) but less torque (175 lb-ft). Jeep does offer a more sophisticated all-wheel drive system on Trailhawk models that makes the Compass capable of light off-roading – something that can’t be said about the Eclipse Cross.

On the road, the Eclipse Cross feels as punchy as its power figures suggest. The torque on tap was perfect for exploiting gaps in New York City traffic, and the Eclipse Cross felt nimble in the city. But on the more open roads around Monticello, New York, the Eclipse Cross didn’t live up to its famous namesake. Handling is unremarkable, and at high revs the engine makes an unpleasant grumbling sound, like it’s not having fun. At least the ride quality is pretty good for an entry-level crossover.

It is difficult to draw a definitive conclusion on reliability. As a brand, Mitsubishi was not ranked in Consumer Reports’ most recent reliability study due to lack of available data. The Eclipse Cross has only been on sale since March 2018, but the magazine did give it a predicted reliability score of “average.” That’s slightly lower than other recent Mitsubishi models.

Mitsubishi told Digital Trends that most Eclipse Cross customers opt for the SE trim level, like our test car. But getting full suite of driver aids requires upgrading to the top SEL trim level ($29,190) and selecting the optional ($2,500) touring package, so that’s what we’d do. In addition to the driver aids, the SEL gets other extras like a head-up display, leather upholstery, and a power adjustable driver’s seat. While the old Eclipse was a darling of the tuner scene, don’t expect the Eclipse Cross to generate quite as much support from the aftermarket.

The 2019 Mitsubishi Eclipse Cross is a solid effort at a small crossover from a company badly in need of a hit. But the Eclipse Cross merely matches its rivals; it doesn’t surpass them. This entire category of vehicle is also questionable: crossovers like the Eclipse Cross are so small they don’t offer dramatically more utility than regular cars. If you must have a dose of ruggedness with your small car, check out the Subaru Crosstrek or the Volkswagen Golf Alltrack.