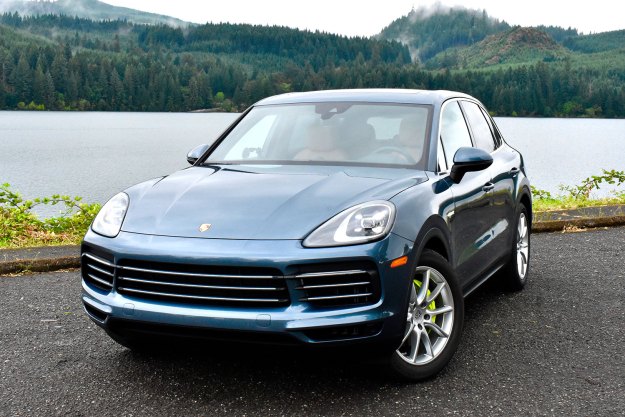 “The 2019 Porsche Cayenne E-Hybrid is an overachiever among luxury SUVs.”

The Porsche Cayenne was introduced in 2003 to howls from Porsche purists. An SUV from an automaker that had previously made only sports cars did seem like a stretch at the time. But the Cayenne has become a mainstay of Porsche’s lineup, vastly outselling the German firm’s traditional sports cars.

Porsche pushed things even further with the introduction of a plug-in hybrid powertrain for the Cayenne in 2014. That idea apparently worked out as well, because a redesigned 2019 Porsche Cayenne E-Hybrid is about to go on sale as part of the third-generation Cayenne lineup. Porsche’s targets for this latest plug-in hybrid are as ambitious as ever.

At a starting price of $81,150 (including a mandatory destination charge), Porsche promises efficiency and SUV practicality, without sacrificing performance. The latest Cayenne E-Hybrid also has to face off against plug-in hybrid SUVs from the likes of BMW, Land Rover, and Volvo. That’s a lot to ask of one vehicle.

Some plug-in hybrids work hard to advertise their eco-friendly credentials, but that’s not the aim of the Cayenne E-Hybrid. Aside from bright green brake calipers and badging trim (which can be deleted upon request), and a charge port, the E-Hybrid looks like any other Cayenne. This is similar to other luxury plug-in hybrid SUVs like the BMW X5 xDrive40e, Land Rover Range Rover Sport P400e, and Volvo XC90 T8. These vehicles are all considered to be variants of their respective manufacturers’ midsize SUVs, rather than standalone models. In the case of the Cayenne, that means people will notice that you’re driving a Porsche before they notice that you’re driving a plug-in hybrid.

The Cayenne E-Hybrid interior follows the same pattern as the exterior, which is not a bad thing. Like other Cayenne models, the upright dashboard and central tachometer reference the Porsche 911. You even turn a key-shaped switch, located in the traditional Porsche spot to the left of the steering wheel, to start the E-Hybrid. Little touches like these help distinguish the Cayenne from other luxury SUVs, giving the interior a bit of extra character.

The interior design isn’t all about fan service, though. The Cayenne E-Hybrid sports a 12.3-inch touchscreen infotainment system with high-quality graphics. Porsche offers Apple CarPlay compatibility, but not Android Auto (that may change soon). The central tachometer is flanked by reconfigurable digital displays, which can be manipulated using thumb wheels on the steering-wheel spokes. The displays show things like the flow of power from the battery pack and gasoline engine, as well as how much energy you’re recuperating from regenerative braking.

When you switch the Cayenne into its most aggressive setting, it actually helps recharge the battery.

Overall, the interior is a nice place to be, but a lot depends on how it is outfitted. We loved the optional 14-way and 18-way power adjustable sport seats, which offered both robust side bolstering and a comfortable feel, as well as a massage function. The combination perfectly suited the Cayenne’s mission in life. The base seats, while comfortable, lacked the bolstering to keep the driver in place during hard cornering – something the Porsche badge encourages. Similarly, we found the lack of a standard power-adjustable steering column odd in a roughly $80,000 vehicle ostensibly designed for driving enthusiasts. A good driving experience starts with getting the steering wheel and seat in the right position, and power adjustability for the steering column makes that a lot easier.

On the practical side, the E-Hybrid offers slightly less cargo space than some other Cayenne variants. That’s because the battery pack sits underneath the cargo floor. The difference isn’t very noticeable in real life, though. In the E-Hybrid, the cargo floor is flush with the lip of the tailgate, whereas it’s slightly below the level of the tailgate in other Cayenne models. The decrease in cargo space will likely be offset by greater ease in loading and unloading.

Plug-in hybrid versions of the BMW X5 and Volvo XC90 offer more cargo space, but because Porsche did not release a complete set of interior measurements, it’s impossible to make a direct comparison on passenger volume. However, it’s worth noting that the Volvo XC90 is available as a seven-seater, while the Cayenne is a five-seater only.

A spacious interior and a decent amount of cargo space are SUV prerequisites, but what sets the Cayenne E-Hybrid apart is the way it drives. A Porsche SUV with a plug-in hybrid powertrain was always going to be an unusual proposition, but the E-Hybrid delivered in ways beyond the obvious. Sure, the Cayenne E-Hybrid offers Porsche-worthy driving dynamics in an efficiency-focused package, but the way it does that is remarkable. The complex powertrain and its many related tech features work so seamlessly that all you need to do is put your foot down.

The Cayenne E-Hybrid powertrain consists of a 3.0-liter turbocharged V6 and eight-speed automatic transmission (not one of the PDK dual-clutch gearboxes used in some other Porsche models), working with an electric motor and 14.1-kilowatt-hour lithium-ion battery pack. Together, the V6 engine and electric motor send 455 horsepower and 516 pound-feet of torque to all four wheels.

The split between gasoline and electric power is determined by a knob on the steering wheel. The Cayenne defaults to E-Power mode, which uses the electric motor only, provided there is enough charge in the battery pack. Hybrid Auto mixes gasoline and electric propulsion, while Sport and Sport Plus deploy both power sources in the name of speed. When the Cayenne is running on electric power, pushing the right pedal past a specific detent point kicks on the V6 engine, similar to the kickdown switches in conventional automatic-transmission cars. We found the detent to be much further into the pedal’s travel than the Bentley Bentayga Hybrid from Porsche’s sibling brand, making it easier to maintain an all-electric cruise. The Cayenne can drive solely on electric power at speeds up to 83 mph, according to Porsche.

Overall, the interior was a nice place to be. But a lot depends on how it is outfitted.

Porsche claims the Cayenne E-Hybrid will do zero to 60 mph in 4.7 seconds with launch control engaged, and reach a top speed of 157 mph. That’s substantially quicker than the BMW X5, Range Rover Sport, and Volvo XC90 plug-in hybrids, although none of those models offer launch control. Then again, that shows where Porsche’s priorities are. We didn’t get to test launch control, but just pulling away from a stop is plenty exciting. We’ve driven many other vehicles that rely on the instant torque of electric motors for quick acceleration, but in the Cayenne E-Hybrid it was like we were experiencing it for the first time.

As if that wasn’t enough, the Cayenne E-Hybrid also has a “Sport Response” button that adds a 20-second boost of power. It may seem like a gimmick but it really comes in handy for one of the most important everyday applications of automotive performance: passing slower vehicles. Pull out into the overtaking lane, press the button (which is located on the drive-mode knob) and those slow pokes will be in your rearview mirror in no time.

The Cayenne E-Hybrid isn’t just good in a straight line. It may be a tall, heavy SUV, but it corners like a sports car. Active suspension is standard, while Porsche Dynamic Chassis Control is available as an option to tame body control. With both features, the Cayenne takes corners effortlessly. You simply point it in the right direction, and it follows the road like a slot car. Porsche also offers a rear-wheel steering system (which turns the rear wheels in the opposite direction to the front wheels at speeds up to 49 mph, and all four wheels in the same direction above 49 mph), and carbon-ceramic brakes (cast-iron brakes are standard). These features work together seamlessly; all the driver needs to do is twist the drive-mode knob into Sport or Sport Plus mode and the Cayenne transforms from comfortable cruiser to corner carver. Letting the car do all of the work does take some of the fun out of driving, admittedly, but it if you crave more involvement, you can always buy a Cayman.

The main reason to buy a plug-in hybrid like the Cayenne E-Hybrid over a conventional SUV is decreased fuel consumption, but EPA fuel-economy and electric-range ratings for the Porsche are not available at this time. We achieved 21.9 mpg over a day of (admittedly vigorous) driving, according to the car’s trip computer. As with all plug-in hybrids, the level of efficiency is dependent on how much time is spent running on electric power. The E-Hybrid needs to be regularly charged and driven in electric mode to get the maximum benefit.

A 3.6-kilowatt onboard charger is standard, but buyers can upgrade to a faster, 7.2-kW charger. However, Porsche does not offer a DC fast-charging option. The Cayenne can also recuperate a limited amount of electricity on the go, with both E-Charge and Sport Plus modes. Yes, when you switch the Cayenne into its most aggressive setting, it actually helps recharge the battery. Sport Plus mode is the quicker way to recover energy, but it’s also less efficient because the gasoline engine is working harder. Even in the slower E-Charge mode, we were able to recover three miles of electric range in about 10 minutes of downhill driving.

Porsche offers a four-year, 50,000-mile, warranty with a 12-year corrosion warranty. The automaker also pays for the vehicle’s first servicing at a dealership. The E-Hybrid is a new model, but other versions of the Cayenne have received lower-than-average reliability scores from Consumer Reports. As a brand, Porsche ranked fairly low in the most recent J.D. Power Initial Quality Study. Crash test scores from the National Highway Traffic Safety Administration (NHTSA) and Insurance Institute for Highway Safety (IIHS) are not available at this time.

With the 2019 Cayenne E-Hybrid, Porsche set out to create three vehicles in one. This latest version of the third-generation Cayenne was designed to be a practical SUV and an efficient plug-in hybrid, while retaining the soul of a sports car. It’s hard to believe something like that could be possible, until you get behind the wheel.

Driving around town or cruising in traffic, the Cayenne E-Hybrid is a perfectly civilized luxury vehicle with a high-quality interior and impressive infotainment system. But that can also be said of competitor luxury plug-in hybrid SUVs. The Volvo XC90 T8 is arguably the better SUV, thanks to its extra cargo space and optional third-row seat. Upcoming new versions of the BMW X5 and Mercedes-Benz GLE plug-in hybrids could also surpass the Cayenne when it comes to utility and luxury.

But no rival can match the way the Porsche responds when you put your foot down and point the nose into a corner. The Cayenne E-Hybrid is fast when you want it to be, but doesn’t require any compromises when you don’t.

Our ideal 2019 Porsche Cayenne E-Hybrid would include several optional extras. We would swap the standard front seats for the 18-way power-adjustable sport seats, and go for the optional 7.2-kW onboard charger. We would also add Porsche Dynamic Chassis Control, rear-wheel steering, and carbon-ceramic brakes. Porsche hasn’t released pricing for individual options, but this will add up to a significant increase over the Cayenne E-Hybrid’s $81,150 base price.

Yes. The Cayenne E-Hybrid is not cheap, but it’s a great all-rounder. It offers SUV practicality, and the added efficiency of a plug-in hybrid powertrain. While it’s not as pure a driving experience as you get in, say, a Boxster, the Porsche DNA is unmistakable.