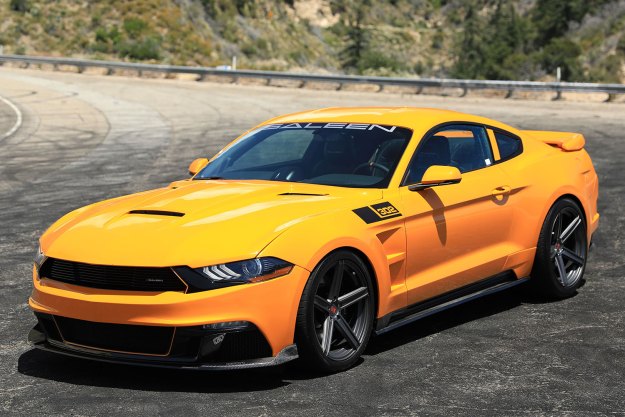 “The Saleen 302 Black Label Mustang provides shock and awe, but not much else.”

With only a few notable exceptions, domestic factory performance was fairly abysmal throughout the 1980s and well into the 90s. The one-two punch of emissions and fuel economy restrictions put a choke hold on automakers, who then did their best to shift attention away from declining horsepower by offering stripe packages, Corinthian leather, and other low-cost marketing distractions.

Year after year went by as the Big Three struggled to engineer their way out of the hole. With little to show for it, enthusiasts turned to the aftermarket to get their kicks in increasing numbers, helping to give rise to companies like Saleen Automotive in the process. The Corona, California tuning house has been applying their special brand of performance to vehicles like the Ford Mustang, F-150 pickup, and Chevrolet Camaro since 1983, and even built their own carbon fiber-clad supercar, the S7, back in 2000.

Their latest creation is this, the Saleen 302 Black Label Mustang. Sitting at the top of company’s Mustang performance totem pole, the Black Label boasts an array of styling upgrades as well as a host of chassis tweaks to complement the supercharged power plant under the hood. With an as-tested price of $78,495, Saleen touts the 800 horsepower machine as one of the best performance-per-dollar values around, and it does indeed offer more grunt than the similarly priced Roush Stage 3 Mustang we reviewed earlier this year.

But as we’ve seen time and again, the numbers don’t always tell the whole story. With factory offerings like the upcoming GT500 promising similar levels of performance with OEM refinement and sophistication, do tuner cars like this Saleen still have a place in the pantheon of performance? We grabbed the keys to this Orange Fury-hued example and hit the street to find out.

The Black Label starts off life as a 2019 Ford Mustang GT Premium with Equipment Group 400A. Largely a comfort and convenience package with features like heated and cooled leather seats and the Sync 3 infotainment system, Saleen opted not to start with a Performance Pack 1-equipped GT, as Roush did, instead relying on their own hardware to restore the necessary balance with the substantial increase in horsepower over the factory setup.

That decision sets much of the tone for the car’s behavior out on the road, as does the Saleen’s significantly revised bodywork. Looking every bit the part of a modern 800 horsepower muscle car, the Black Label features all manner of scoops and vents from stem to stern, though closer inspection reveals that very few of them are actually functional. The heat extractors at the top of the hood are, though, and that’s likely because there’s a near-Hellcat Redeye-sized 2.6-liter blower of Saleen’s own creation providing up to 12psi of boost lurking just beneath.

Outfitted with a 103mm throttle body and (we can assume) custom ECU tuning, Saleen says the package delivers 800 horsepower and 687 pound-feet of torque. The Black Label’s power plant also gets an engine oil cooler, and the engine exhales through a Saleen high performance exhaust system.

Looking every bit the part of a modern 800 horsepower muscle car, the Saleen features all manner of scoops and vents.

On the chassis front, the Black Label scores a set of six-piston calipers and 15-inch discs up front to provide the needed stopping power, while the low stance is provided by Racecraft springs at the front and rear which are paired up with Racecraft struts, shocks, and sway bars.

Evidence of Saleen’s handiwork can be found all over the cabin as well, from the white-faced gauges to the two-tone, alcantara-trimmed seats. While they’re mostly aesthetic tweaks, Saleen’s inclusion of a short-throw shifter is a noteworthy exception to that rule.

While the chassis upgrades and aggressive aero bits suggest that Saleen has developed the 302 Black Label as a surefooted machine that’s as confident in the twisties as it is in a straight line, it doesn’t take long for that particular notion to fade from thought.

Saleen’s five-spoke wheels look sharp, though the rubber they’re clad in is a more ponderous choice. The 20-inch wheels are staggered in width, measuring 9.5-inches in width up front and 10.5-inches at the back, but they’re outfitted with 275mm-width tires at all four corners. The tires are General G-Max summer tread with staggered sidewalls measuring 275/35R20 up front and 275/40R20 in the rear, likely chosen due to the raked stance they provide.

Or least let’s hope so, because they certainly aren’t doing the handling any huge favors. A factory-stock GT with Performance Pack 2 would run circles around this car on an autocross while providing similar levels of compliance (along with damper adjustability).  Even if the Racecraft suspension upgrades could make up the difference, the Saleen’s comfort-focused seats, which provide both heating and ventilation but almost nothing in terms of lateral support, make it clear that this car was designed for the driver who wants a fast straight-line machine rather than a sports car. And there’s certainly nothing wrong with that, provided the car is actually fast in a straight line.

With that big blower mounted atop the Mustang’s five-liter V8, there’s every indication that the 800hp Black Label is a stoplight superstar. But in practice, there are several factors working against it right from the get-go, and they start in the drivetrain itself.

While the six-speed gearbox works well enough and provides plenty of sonic theatrics thanks to Ford’s inclusion of automatic rev matching for the 2019 model year (a feature which will likely extend the life of the gearbox in this particular situation), the ratios are unchanged from stock, which means they’re designed for a car with 460 horsepower rather than one with almost double that amount. As a result the car often feels nervous in lower gears whether you’re caning it or not. It also means that you have to shift more often than should be necessary with this much power, which effectively makes the car slower. That’s a bit disappointing, but it’s probably unreasonable to expect Saleen to swap out the gearbox for a more appropriately tuned unit.

Evidence of Saleen’s handiwork can be found all over the cabin, from the white-faced gauges to the two-tone seats.

What is reasonable to expect is an engine that provides consistent, trustworthy performance, and the Saleen Black Label doesn’t. Throughout our time with the car, power levels would fluctuate noticeably despite no change in throttle input. Hiccups from the boosted Coyote happened frequently, seemingly at random, and it quickly eroded our confidence in the car.

Between the engine’s flustered behavior and a factory traction control system that was wholly unprepared to deal with an additional 340 horsepower, moments where we could extract the Saleen’s true potential were rare. When everything did work, though, the Black Label proved to be a quick machine indeed, and Saleen’s custom exhaust system provided a worthy soundtrack.

The true cost of individuality

At $78,495, the Saleen 302 Black Label Mustang may be one of the least expensive ways to get to 800 horsepower without getting your hands dirty, but here expectation and reality are two wholly different things. In this day and age, most tuners simply cannot develop performance vehicles to the same extent that an OEM can, and the Saleen Black Label is a textbook example of the shortcomings that come with those limitations.

A Dodge Challenger SRT Hellcat Redeye starts at $69,650 (or $75,650 with the Widebody package) and offers factory refinement in terms of both software and hardware, adjustable suspension, more mechanical grip, greater levels of comfort, more torque, and it’s undoubtedly faster in a straight line than this Saleen is. And while we’ve yet to get any seat time in the upcoming GT500, it’s a safe bet that it will include a similar list of benefits versus the Saleen.

The Saleen does, however, provide two things that those factory offerings cannot: The option to row-your-own gears, and exclusivity.

We’re big proponents of three pedals, as it’s simply a more engaging way to operate a performance vehicle. But when we’re talking about a tuned muscle car that’s focused on straight-line performance, an automatic or dual-clutch transmission is going to provide better results, especially when you consider how out of step the six-speed transmission’s ratios are with the car’s output, so the benefit is negligible from an experiential standpoint.

What’s likely of greater import to would-be buyers is the prospect of the Saleen’s specialness. It looks cool, sounds lovely, and you’re unlikely to see another one at your local car show. If that speaks to you, Saleen is happy to put you in the seat of your very own Black Label Mustang (as well as the entry-level White Label or mid-range Yellow Label packages, if one of those better fits your needs and/or budget). It’s also worth noting that Saleen provides a three-year, 36,000 mile warranty on every new car they sell.

No. For those who are more interested in real-world capability than turning heads at Cars and Coffee, the Saleen Black Label should be seen as a cautionary tale about the pitfalls of chasing numbers.