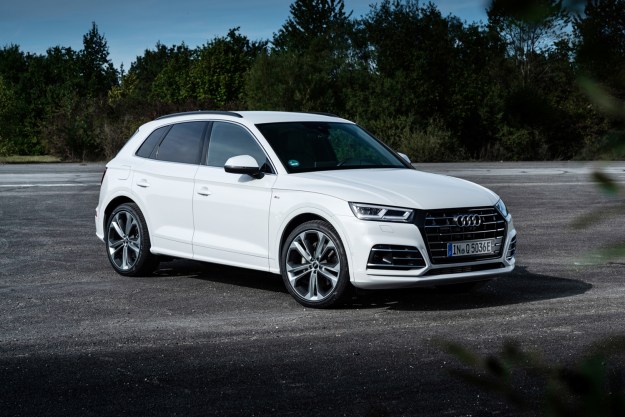 “The Audi Q5 TFSI E is a luxury SUV that just happens to be a hybrid.”

Driving a hybrid can feel like commuting in Harry Potter’s light blue Ford Anglia; some feel like they have a mind of their own. The powertrain enigmatically juggles between the gasoline-powered engine and the electric motor with the attention span of a four-year old in a zoo, so the end result is a commute that’s efficient but equal parts confusing and frustrating. Audi asked its engineers to leave out the wizardry when developing a new generation of plug-in hybrid technology, and they believe they have delivered.

The new setup will be available in the 2020 Q5, which is the German company’s bread-and-butter model, as well as in the A7 and in the A8. The mid-level A6 will receive it, too, but not on our shores. The rationale is that our market can only absorb so many hybrids. The Q5 will generate the most volume, so it’s the one I selected for a test drive on the outskirts of Munich, Germany.

Pricing hasn’t been finalized yet, but Audi told me the Q5 TFSI E will cost about the same as an SQ5 ($52,400) after the applicable incentives elbow their way into the equation. Buyers can claim up to $6,712 from the federal government, and some states — including California – will happily throw another wad of cash on the hood to coax motorists into going green.

Pocket the cash, pop the hood, and you’ll find a 2.0-liter four-cylinder engine with a turbocharger strapped to its side. So far, so good, except for the cigar-thick orange wire that sprouts from the back of it. The standard Q5 doesn’t doesn’t have an orange spaghetti in its engine bay, so what’s it about? It signals the presence of an electric motor sandwiched between the turbo four and the seven-speed automatic transmission. Quattro permanent all-wheel drive channels the system’s total output of 362 horsepower and 369 pound-feet of torque to the four wheels. The electrified Q5 takes 5.0 seconds to sprint from zero to 60 mph, which isn’t bad for a 4,685-pound SUV with only four cylinders.

To add context, the SQ5 takes 5.1 seconds to reach 60 mph from a stop. It achieves this time with a 3.0-liter V6 tuned to generate 349 horsepower and 369 pound-feet of torque. It’s about 285 pounds lighter than its hybrid counterpart. Most of the extra weight comes from the liquid-cooled, 14.1-kilowatt-hour lithium-ion battery pack stuffed under the trunk floor. This packaging solution chews up some cargo space, but the trunk remains adequately spacious.

The plug-in Q5 isn’t for buyers who want to tell the world how green they are. Little visually sets it apart from the non-hybrid model. It’s the same story inside, where you won’t find annoyingly bright LEDs that shine when the electric motor does its thing, or a sprinkling of botanically-incorrect leaf-shaped emblems that remind each and every passenger how much CO2 they’re saving. From the driver’s standpoint, only technology denotes the Q5’s ability to move without burning gasoline.

From the driver’s standpoint, only technology denotes the Q5’s ability to move without burning gasoline

Audi’s digital, driver-configurable instrument cluster joins the Q5’s list of standard features after getting a degree in hybridization. The efficiency gauge on the left side shows drivers how much electricity is at their disposal at any given moment, and it cleverly takes speed limit information into account. If the speed limit is 25 mph, and the pack has a full charge, the gauge shows you’re able to continue cruising while keeping the turbo four off (if you adhere to the posted limit, of course). If the speed limit is 80 mph, however, or if the battery’s charge is low, the gauge shows the two power sources will need to work together to keep you moving. There’s also a graph-like display that provides the vehicle’s total range. This wealth of information is a boon when you’re planning a route on your own.

There might be some witchcraft in the Q5 after all. When a destination is entered into the navigation system, the software is smart enough to know where there are hills, which part of the route is driven at high speeds, and which sections are in urban centers, and it allocates the energy in the battery pack accordingly. This is a smarter way to drive a hybrid; there is no sense in draining the battery on the highway, where it’s not needed, and relying solely on the turbo four in town, where the motor has the range and the power to drive the Q5 without yelping for help.

Two personalities that get along

The Q5 always starts in electric mode if there’s enough juice in the battery to move it along, and it silently whirs up to speed, roundabout after roundabout. Leaving the city behind, it’s cool, calm, and collected on the roads that snake through the wet Bavarian countryside that looks just like the images you see on German beer labels. The multi-tasking SUV doesn’t drive like a hybrid, which shows the effort engineers put into making it behave like a normal people-hauler. The motor and the engine constantly talk to each other via the on-board computer, but they always agree on how to split propulsion duties, so the transition between electric and gasoline is seamless. Modern engines are so quiet that telling which power source is doing what sometimes requires looking at the information displayed on the instrument cluster.

Getting the most out of the powertrain doesn’t require having an address entered in the navigation system. In addition to the default Hybrid mode, the Q5 offers two additional profiles named EV and Battery Hold, respectively. I knew my route included a traffic jam, so I flicked on Battery Hold by tapping the touchscreen a few times to avoid using electricity while cruising at normal highway speeds, meaning the turbo four powered the Q5 on its own, and switched to the EV mode when I got to the bottleneck. The engine turned off, and I got through a three-mile back-up (caused by folks staring at workers installing a sign — seriously) on battery power. I switched back to Hybrid as soon as the pace picked up again to replenish the battery.

Acceleration is brisk, because the electric motor has two personalities. It primarily joined the drivetrain to keep fuel economy and emissions in check, but it also provides a noticeable acceleration boost when flattening the pedal. The specifications don’t lie: with a frugal four-cylinder under the hood, the Q5 sprints like a model with two additional cylinders amounting to one more liter of displacement. The TFSI E boldly argues electricity is the replacement for displacement.

The quest for harmony, predictability, and normality led engineers to tone down the brake energy recuperation function. The powertrain relies on the motor to generate electricity when coming to a stop, but one-pedal driving is challenging at best. The battery-powered E-Tron is the same way, and an Audi representative told me that’s intentional. Customers want smoothness, which is understandable, but I wish there was a way to dial in a more aggressive regeneration profile for those who want to use only the accelerator pedal while driving. It’s a cool part of driving an electrified car that the Q5 lacks.

My time behind the wheel was too short to accurately measure the Q5’s fuel economy, or its electric-only range. Both numbers depend on a wide variety of factors, and reliably testing them requires days behind the wheel. The Environmental Protection Agency (EPA) hasn’t put the model through its paces yet, but expect to drive gasoline-free for approximately 20 miles if you leave with a full charge, and drive in ideal conditions.

Speaking of a full charge, the 7.4-kilowatt charger tops up the battery pack in about two and a half hours. It’s possible to charge at home via a standard household socket, but you’ll need to wait about twice as long to reach 010%.

The plug-in hybrid Q5 benefits from the same four-year, 50,000-mile warranty as the regular version, though details about the warranty that applies to the battery won’t be released until closer to the model’s on-sale date. The plug-in hasn’t been crashed tested yet, but we expect it will perform just like the non-hybrid Q5, which earned a five-star rating from the National Highway Traffic Safety Administration (NHTSA), and was named a top safety pick by the Insurance Institute for Highway Safety (IIHS).

When I drove the E-Tron, I walked away thinking I’d stepped out of a normal SUV that just happened to run on electricity. It’s no surprise, then, that the Q5 TFSI E drives, looks, and feels like a regular luxury SUV with a hybrid trick up its sleeve.

Clever tech makes the Q5 TFSI a quick, smart, and competent hybrid model that’s as well-built as you’d rightfully expect a modern Audi to be. It’s a strong contender if you’re in the market for a gasoline-electric model that doesn’t behave like one. It doesn’t have a mind of its own, so it doesn’t give the impression that its drivetrain is possessed. Motorists seeking the visual novelty of driving an electrified car will need to find a model that places a bigger emphasis on looking green.