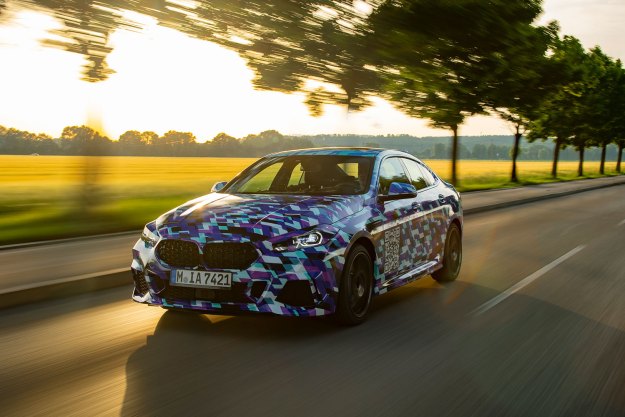 “The 2 Series Gran Coupe is an unprecedented but credible take on the concept of a BMW sport sedan.”

My first encounter with the 2020 BMW 2 Series Gran Coupe felt like meeting The Mask.

Instead of admiring it under the bright lights at an auto show, or checking it out as a .jpg in my inbox, I saw it draped with psychedelic, multi-colored camouflage in front of a non-descript testing center located on the far outskirts of Munich, Germany. It looked ready to go trick-or-treating at Audi’s and Mercedes-Benz’s headquarters.

BMW camouflaged its smallest Gran Coupe because it’s still a work in progress. It’s mostly done, and stylists locked in the design long ago, but engineers concede they still have some fine-tuning to do over the coming months. The automaker is not taking any risks, or cutting any corners. It hopes the 2 Series Gran Coupe will lure first-time buyers into showrooms as its new entry-level model. Getting it wrong could send motorists full of aspiration across the street to the Audi or the Lexus store for life. Starting ‘em young is the key to building brand loyalty.

Two questions come to mind as I walk around the pre-production prototype, trying fruitlessly to turn on my x-ray vision in order to see through the wrap: why, and how? The first question is easy to answer. BMW’s market research shows 30-somethings want a sportier, smaller, cheaper, and hipper alternative to the 3 Series without dealing with the constraints of commuting in a 2 Series coupe. Mercedes-Benz and Audi realized this several years ago, and they have reaped the rewards of their foresight, especially in key markets like the United States and China. I went straight to the source to ferret out the answer to my second question.

The 2 in two flavors

“Technology is very important. We had three focus areas during the development process. The first was design; it had to look sporty. The second was driving dynamics; it had to drive like a BMW. The third was connectivity; we wanted to help customers bring their digital lifestyle into the car,” explains Jochen Schmalholz, the model’s project manager, before letting me loose in one of his babies on the twisting roads around Munich.

BMW plans to bring two flavors of the 2 Series Gran Coupe to the United States. The first is named 228i, rated at 228 horsepower and 258 pound-feet of torque; it’s the entry point into the lineup. The second – and, for the time being, range-topping – model is the M235i, with 302 horsepower and 331 pound-feet of torque. Both are built on the same front-wheel drive platform found under the Europe-only 1 Series hatchback, among other models, but they rely on serious electronic witchery to ward off understeer, a term which refers to a front-driven car’s tendency to pull towards the outside of a bend during brisk cornering.

In America, the two models will come exclusively with an eight-speed automatic transmission backed by BMW’s part-time xDrive all-wheel drive system, and there are no plans to make a cheaper, front-wheel drive-only variant of the car. Not yet, anyways. Could it happen? No one was willing to tell me, but my crystal ball says it’s not impossible. Here’s a hint: Audi and Mercedes both do it. What about a hybrid? It’s technically possible, but not confirmed yet.

I speed out of the parking lot in the M235i xDrive, a bottle rocket of a car with a satisfyingly deep exhaust note. It’s quick off the line, the 2.0-liter turbo four delivers very linear acceleration, and before long I’m on the brakes to return below the speed limit. The pace picks back up on the highway, but the only indication that I’ve reached freeway speeds is the number shown on the digital speedometer. The M235i stays composed and comfortable on Germany’s smooth asphalt, though its suspension was tuned for American roads, and its turbo four quietly hums away in the background. Speed won’t peel the mask off of the front end, though; it’s on tight.

Johannes Kühberger, the mastermind responsible for making the 2 Series Gran Coupe handle like a proper BMW, is riding shotgun. We begin talking about old Saabs after spotting a 900 from the 1980s, but he regularly stops waxing poetic about the now-defunct Swedish brand to point out different aspects of the 2 Series. He notably explains the tuning of the steering system isn’t final yet because it’s continually tweaked until the minute before the car is signed off. When he asks for my input, I reply that it’s direct and well-weighted, but I’d make it more responsive in comfort mode. He nods thoughtfully.

The electronics wake up when the navigation system’s map begins to looks like a bowl of spaghetti. There is no way to hide the fact that most of the weight is up front, that’s basic physics, but the M235i delivers relatively neutral handling thanks to an advanced, quick-thinking traction control system and its part-time all-wheel drive system, which sends the engine’s torque to the rear axle only when needed. It’s not as eager to lead the driver into a dance as the rear-driven 2 Series, it prefers to be led, but it’s not one to stay seated with its arms crossed when Hey Ya! comes on the radio, either.

I turn left onto a dirt road that disappears into a dense forest that may as well have been created by Nintendo for a Zelda game. There, a second masked prototype, the entry-level 228i xDrive, is waiting for me in the shade when I step out of the M235i xDrive. I still can’t calibrate my x-ray vision through the camouflage, but I’m pretty sure there are minor design changes between the two models.

The 228i inevitably feels less lively than the M235i. It’s not as quick, not quite as sharp around a bend, and less sonorous. The trade-off is that it’s more comfortable due to a more compliant suspension.

While BMW went to superhuman lengths to cover up every part of the car’s interior, Kühberger tells me most of the technology (including the digital, driver-configurable instrument) comes from the 2 Series’ big brother. “It’s what you already know in the 3 Series,” he summed up. Cherry-picking hardware and software from the bigger Bimmer’s parts bin ensures the 2 is suitably tech-savvy in spite of its entry-level status.

The infotainment system looks almost exactly like the 3’s, and I like the split-screen functionality. The software shows up to three tiles side by side, so the driver doesn’t have to get rid of navigation directions to change the radio station. The screen itself displays sharp graphics, and it’s fully touch-capable. Alternatively, it’s possible to jump between the various menus using the iDrive controller on the center console, but that’s far more awkward than simply reaching out and poking an icon.

The front-wheel drive platform let BMW carve out an acceptable amount of space inside. I’m 5’11” and I could comfortably sit behind myself, though rear headroom is a little on the tight side. I’d be okay on a trip across town, it’s not cramped by any means, but I’d need to develop a turtle-like ability to tuck my head into my torso to sit in the back on a trip across the country. Making the four-door 2 Series a conventional sedan rather than a Gran Coupe, which is BMW-speak for fastback, would have given the rear-seat passengers more headroom, but the body style wouldn’t have remained true to the model’s ethos.

“We should have in the range a car which is more emotional than a normal sedan, and the Gran Coupe concept is exactly right,” says Florian Moser, the spokesperson for BMW’s 1 Series and 2 Series models, over coffee. “We haven’t had this before in the compact segment, and there is still space for exactly this concept between the 3 Series and the 2 Series,” he adds.

BMW will continue fine-tuning the 2 Series Gran Coupe over the coming months. Death Valley will put its cooling system to the test. Scandinavia will scourge its electronics. Test tracks around the world will push its suspension and brake components to limits future buyers are unlikely to go near. Kühberger will tweak the steering over and over again until BMW executives pry the laptop out of his hands. This torture regime will end when the model makes its public debut during the 2019 Los Angeles Auto Show opening its doors on November 22. This time, it will leave its Halloween mask in Munich and bare it all.

The Gran Coupe will certainly split opinions. Some will complain that its front-wheel drive underpinnings do BMW’s heritage a dishonor. Some will point out it’s really not a coupe, and they’ll be right, while others will say its grille is too big, which is subjective. That’s fine; if everyone agreed, we’d all drive the same thing and the automotive landscape would be extremely boring. What’s clear, at least from my limited time behind the wheel of prototypes, is that the 2 Series Gran Coupe feels like a BMW should.

The 2 Series Gran Coupe will begin arriving in American showrooms during the first quarter of 2020. BMW hasn’t announced pricing information yet, but it’s reasonable to assume it will start in the vicinity of $30,000. When it lands, its main rivals will be the Audi A3 Sedan – which is due for a makeover in the near future – and the recently-launched Mercedes-Benz A-Class Sedan. All three models are aimed at the same style-seeking, tech-loving target buyer; they’re variations of the same theme.

We’ll have a better idea of where the 2 slots in the pecking order when if finally takes off its crazy mask.