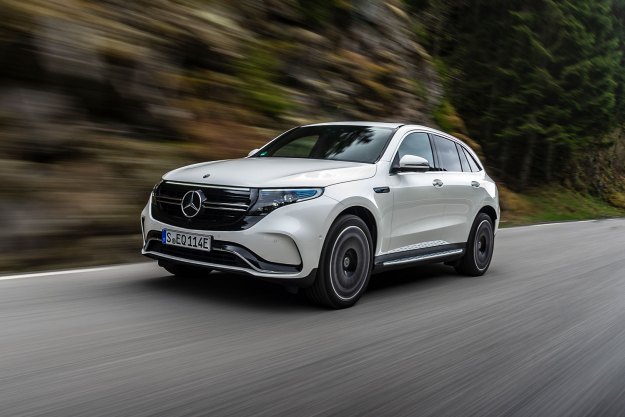 “The EQC is an excellent car in search of a suitable electric vehicle infrastructure.”

It’s not often that an automaker comes along and invents a whole new market out of essentially thin air. Oh, sure, luxury brands like to introduce coupes with too many doors, or wagons with extra body cladding so they can be dubbed crossovers, but that’s not the same thing as building a whole new niche of the automotive industry from scratch. That’s precisely what Tesla did in 2012 when it introduced the Model S.

It has taken mainstream luxury automakers quite some time to catch up to the upstart, but the future has finally arrived. Mercedes-Benz is throwing its hat in the ring for the 2020 model year with its new, all-electric EQC.

The model we traveled to Norway to drive was called EQC 400 4Matic, but there’s no real hair-splitting to be done, as that’s the only model currently in the portfolio. Mercedes-Benz has not yet announced pricing or even a definitive U.S.-market availability window for this new entry, but we expect to see it arrive stateside by this time next year.

The 2020 Mercedes-Benz EQC looks a lot like a GLC from a distance, and that’s no accident. The EQC rides on the exact same wheelbase as its gasoline-powered cousin, and many of the exterior design cues carry over.

There are, of course, some key differences. Up front, there’s a largely closed-off grille flanked by blue-tinged LED headlamps. Blue is the “green” color in Europe, so this touch makes a great deal of sense in an electric vehicle. Depending on how you spec the EQC, it may also have a set of pronounced running boards.

These started life as styling elements, but the EQC program director told us that the team later discovered that the heavily sculpted trim pieces actually divert air around turbulent areas near the wheels, improving the crossover’s aerodynamic profile. Function following form to the benefit of both.

Inside, the EQC is 100% Mercedes-Benz. Our test model boasted quilted, two-tone (white over black) seating surfaces that played nicely off the rose gold and aluminum trim accents. A strip of ambient lighting (blue by default, of course) runs behind the infotainment and cluster screens, giving the dash a futuristic touch. This is augmented by dash and door trim inspired by the metal fins of electronic heat sinks. Difficult to clean, perhaps, but quite slick.

Mercedes-Benz has not yet released cargo dimensions or other interior specifications for the U.S.-bound EQC. We expect they’ll surface late in 2019 as the formal launch approaches.

The EQC’s release has been timed perfectly to coincide with the rollout of the Mercedes-Benz User Experience, or MBUX. This system has already started to pop up in production vehicles currently available for sale, like the A-Class and the GLE, but has yet to trickle down to the company’s full lineup.

MBUX layers advanced language and gesture control on top of the company’s new touchscreen interface. Its artificial intelligence-powered gesture recognition technology can discriminate between driver and passenger inputs, detect motion near the center screen (and use it to trigger certain menus) and allow drivers and passengers to perform certain actions (such as turning on dome lights or footwell lighting) without physically manipulating a control.

The suite also responds to natural language inputs (its trigger phrase is “Hey, Mercedes.”), allowing users to perform infotainment-related functions, search for vehicle features or settings, or just about anything else you’d expect from a similar “smart” gadget.

The EQC also comes standard with a 10.25-inch digital instrument cluster and matching center touchscreen. The cluster is customizable, featuring multiple display themes and the ability to select from a handful of different readouts for the right-side gauge area. The EQC has no need for a tachometer (obviously), but an energy output meter is the next-best thing. There’s also an “EQ” display showing charge, regen, and output. Turn-by-turn navigation and a range monitor round out the choices.

Speaking of EQ, it gets its own category on the infotainment system’s home screen. This section is home to range and state-of-charge monitoring and the UI for the in-vehicle component of the charging process. Some EQ features are offloaded to the navigation system, which is where you’ll find lists of nearby charging stations and status updates indicating the number of available ports.

While the EQC cornered adequately and rode quite luxuriously, it wasn’t particularly sharp or light on its feet.

The integration between EQ and the navigation system goes deep. Mercedes-Benz went to great pains to make sure owners can tackle range anxiety issues proactively. For example, when planning a trip, users can set minimum battery level thresholds for both charging stops and the end of a trip.

Say, for instance, you’re doing a 500-ish-mile road trip and you expect to charge twice, but once you arrive, you’ll be able to leave your EQC on a private charging station for a long period of time, so there’s not much need for surplus battery. You could tell the EQ software that you never want to go below a 20% charge during the trip to allow for some wiggle room between stops, but set a separate end-of-trip threshold of just 10%, avoiding an unnecessary extra stop to top off the battery before the end of your drive.

EQ and the navigation system will then negotiate a route which fits your requirements, tell you exactly how long you need to charge at each station, and pre-condition the battery along the way so that it charges as quickly as possible at each stop.  With this, Mercedes is using information and control to defeat range anxiety.

A companion app for smartphones allows you to monitor the EQ interface remotely, so you can safely grab a meal or some coffee while you watch your EQC charge. It also offers many of the typical features of automotive ownership apps, such as remote locking, startup-related functions, and status notifications (maintenance, valet monitoring, etc.).

If all of that isn’t enough, Mercedes-Benz also throws in a suite called Eco Assist which helps drivers monitor and alter their behind-the-wheel behavior to improve their own efficiency. It integrates with the navigation system, feeding information like changes in speed limits to give drivers the chance to proactively adjust their driving styles to maximize their potential range.

And since it is a new product, EQC also benefits from the latest incarnation of the company’s safety and semi-autonomous features. Adaptive high beams, speed limit monitoring, active brake assist, and the proprietary Pre-Safe collision avoidance and mitigation are all standard equipment. A Driver Assistance package adds Distronic adaptive cruise control, lane keeping, blind spot protection and Pre-Safe Plus.

The EQC has a pretty impressive spec sheet. At its core is an 80-kilowatt-hour lithium-ion battery pack, and while Mercedes-Benz has yet to submit the EQC for EPA certification, we expect its range to check in at around 250 miles.

That’s only half the story, though. Thanks to Tesla, luxury EVs can’t simply count on going the distance; they also must be capable of covering it quickly. To that end, Mercedes-Benz gave the EQC twin motors (one over the front axle, one over the rear axle) that deliver a total output of 402 horsepower and 561 pound-feet of torque, and a top speed of 112 mph.

On the road, this translates to some serious straight-line speed. Mercedes-Benz says the EQC will accelerate from zero to 60 mph in just 4.8 seconds, and we believe it. There’s no noise or drama, just a healthy shove in the back the instant you floor the pedal.

Paddles behind the wheel allow the driver to adjust the aggressiveness of the EQC’s regen mode. At its lowest setting, it feels a lot like releasing the accelerator in a conventional, gasoline-powered car. Crank it up, and it starts to behave more like you’re driving along in a very, very low gear. At its most aggressive, just lifting off the pedal is enough to bring the EQC completely to a stop.

In the EV world, this is referred to as one-pedal driving, and thanks to clever implementation by Mercedes-Benz, the EQC does it quite well. It takes very little time to acclimate to the deceleration available with just slight adjustments in pedal pressure, and we found it became second nature by the end of the drive.

When the roads got curvy, we weren’t quite as enthusiastic about the EQC’s performance. While it cornered adequately and rode quite luxuriously, it wasn’t particularly sharp or light on its feet. It’s no AMG model, after all.

When the EQC arrives on U.S. shores next year, its electric small SUV competitors will be the Jaguar I-Pace and Audi e-tron. Jaguar’s I-Pace was the first traditional automaker to bring an electric SUV to market last year, and it has already gained a foothold in the U.S. market. Its 90-kWh battery pack and EPA-estimated range of 240 miles set the standard for premium electric crossovers. Its horsepower (394) and torque (512 lb-ft) are surpassed slightly by the output of the Mercedes, but the Jaguar is just a tad quicker to 60. The I-Pace’s real advantage is in top speed, at 124 mph.

Audi’s e-tron offers only 204 miles of range from its 95-kWh battery pack, and it delivers 355 horsepower in normal driving conditions, though a boost mode temporarily bumps that figure to 402. Like the electric Jag, the Audi boasts a 124-mph top speed.

There are other compact luxury electric crossovers on the horizon, though. By the time the EQC arrives in showrooms, we may have more information on BMW’s upcoming iX3. Tesla promises its new Model Y crossover will offer up to 300 miles of range and sprint to 60 mph in just 3.5 seconds.

Mercedes-Benz enjoys a sterling safety reputation, and as we mentioned above, the EQC has no shortage of feel-good safety equipment either baked in or available at an extra cost. We expect more information regarding its warranty (with an emphasis on the battery pack and powertrain) to come out closer to its formal U.S. debut.

It’s difficult to say exactly how we’d spec the EQC this early on, as packaging has not been clearly defined for the U.S. market. We are partial to the multi-spoke wheels featured on our test vehicle, and given how well-equipped the base model promises to be, we’re not sure we’d spend much more than the (currently unknown) cost-of-entry.

By all appearances, the 2020 Mercedes-Benz EQC looks to be an excellent car in search of a suitable electric vehicle infrastructure. When it arrives here next year, it will make the most sense for buyers who are content with long home-charging times and those who are lucky enough to live close to existing DC fast-charging stations—a list which keeps growing by the year. This may only be their first shot in the EV war, but the Mercedes EQC is a shot that is on target.