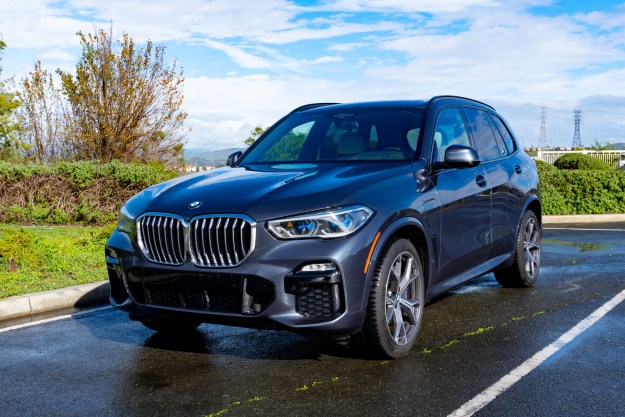 New car buyers have made it very clear that they want SUVs. People want to sit higher, feel safer, and have enough room for trips to Costco, Home Depot, and Target. The issue: SUVs tend to suck up more gasoline than, say, a sedan. But there is a way to have a large luxury vehicle that also plays well with your bank account and the environment.

The 2021 BMW X5 xDrive45e plug-in hybrid (PHEV) takes what people like about the German automaker’s luxury SUV and adds a plug-in hybrid powertrain. It’s a slick integration that doesn’t display any of the occasional weirdness we saw with the BMW 330e PHEV. Instead, it highlights the work BMW has done to make sure that its PHEV transition vehicles just work without compromising the BMW experience.

Starting at $63,700, the AWD (all-wheel-drive) X5 xDrive45e is eligible for a federal tax incentive to the tune of $7,500. That’s the same amount you’d get for an EV. The reason for the large rebate is its 24 kWh capacity battery pack — of which 17 kWh is usable. That large pack not only saves a potential customer money at the sales lot but also in their daily life.

That tax incentive also brings the price of the vehicle down below the price of the gasoline-only X5 xDrive40i, which starts at $62,900. That’s without any state or local incentives that may stack on top. Like the 330e PHEV, the X5 PHEV ends up being the less expensive option, both out the door and while driving.

Of course, the cheapest way to get around would be in EV mode. The reason the vehicle gets the full government tax incentive is the same reason it does well at getting around sans gasoline.

In EV-only mode, the X5 xDrive45e has an EPA range of 31 miles. In our tests, we got 27 miles of range in mixed driving conditions, including on the highway, in neighborhoods, and on back roads in 51-degree weather. Cold weather can reduce the efficiency of a battery-powered vehicle, but it seems that it was warm enough not to affect the BMW in any real fashion. The range should be enough to at least get many commuters to work without using any gas.

Charging is really a strictly at-home experience, though. The X5 only supports charging up to 3.7kW, which makes charging on the go a waste of time. During our tests, I had no issue charging at home while sleeping and woke to a full battery in the morning.

Cruising in EV mode has been enhanced over previous hybrid X5s. The SUV will now travel at speeds up to 84 miles an hour, an increase of 9mph over the 75mph found on the previous version of the vehicle. With speed limits in some states being 70mph and above, it’s good to note that, in the eight states with 80mph speed limits, the X5 PHEV can keep up with traffic in EV mode if needed.

Outside the battery-only propulsion mode, BMW has done an outstanding job merging the two powertrains in the X5. Where the BMW 330e had a few bits of weirdness, the transition from gas to electric was always seamless during my week with the X5 xDrive45e PHEV. In all six modes available (EV only, Eco, Eco Pro, Adaptive, Sport, and driver set Individual mode), the vehicle drove exactly as you would expect.

For those who require maximum acceleration from their SUV, BMW says Sport mode delivers a zero to 60 time of 5.3 seconds — a half-second slower than the gas-powered version. We were unable to properly test this on a track, but while accelerating from a standstill, this number seems likely to be correct. In other words, it’s not as quick as the regular X5, but the PHEV is still plenty quick for a majority of drivers. For those looking for something very sporty, there’s always the X5 M50i. That’s where you put your dollars for an SUV with sports car excitement.

Regardless of mode, ride quality is handled deftly thanks to BMW’s Dynamic Damper Control and air suspension. The ride quality matches the situation, whether in either of the aggressive sport modes or more placid eco and adaptive modes. Steering is also treated to impressive mapping, with just the right amount of tightness while pushing the vehicle to its limits, but also more relaxed for drives around town.

Inside, the X5 xDrive45e matches the interior of nearly every other BMW in this generation. The seats are comfortable but have enough side bolster to help keep the driver and passengers in their locations around tight corners. Head, leg, and shoulder room is enough to fit my over six-foot-tall frame into all but the center seat in the back. Not that a tall person should ever sit there, regardless of whatever “shotgun” game you might be playing to secure seating in a vehicle.

In the driver’s seat, BMW offers up a driver-focused control center, with a 12.3-inch infotainment display tilted towards the driver. The automaker’s latest iDrive 8 hasn’t made it to the X5 yet — so you get iDrive 7 — but what you lose in the latest system, you gain in physical climate control, media control, and programmable buttons. In the center console next to the shifter is the iDrive round controller surrounded by quick buttons to the main infotainment system. Once you commit those to memory, the infotainment system is much easier to use.

If you’re more about plugging in your phone, BMW offers wireless CarPlay support but also Android Auto support starting with vehicles produced since August 2020. If Android is your platform of choice, it’s best to make sure the vehicle supports your phone before driving it off the lot.

BMW’s voice assistant falls short of offerings from Mercedes, Android Automotive-enabled Volvos, and even BMW’s own updated system. Its natural language system is good, but there are better digital helpers out there. This is especially true after driving a vehicle with iDrive 8.

On-the-road tech is still top-notch with BMW’s optional $1,700 hands-free Extended Traffic Jam Assistant system. At low speeds on select highways, the X5 allows the driver to remove their hands from the steering wheel in certain situations. The driver still needs to keep their eyes on the road, and an in-car sensor tracks their face to make sure that’s happening. While in gridlock, it worked well without any issues and handled cut-ins with ease.

For those that commute daily in horrid traffic, it’s probably worth the extra cash just to reduce at least some cognitive load of traffic. Just make sure you’re not lulled into not paying attention to the world around you.

In the very back, the X5 sits in the middle between competitors from Volvo, Mercedes, and Audi in cargo space with 33.1 cubic feet of space with the second row up. When folded down, that expands to 72.3 cubic feet. There is no option for a third row, but I’m fine with that. A third row in this vehicle would be a horrible sitting experience. Those looking to add more people to their vehicles should jump up to the larger SUVs on the market.

Standard safety features include front collision warning, lane departure warning, roll-over detection, and emergency brake assist. The 2021 BMW X5 is an Insurance Institute for Highway Safety (IIHS) Top Safety Pick. The AWD X5 has a four-star safety rating from the National Highway Traffic Safety Administration (NHTSA). The X5 PHEV variant hasn’t been tested as of the time of this review’s publication. While we don’t anticipate the PHEV version of the vehicle to stray too far from the overall X5 rating, the extra weight of the battery and electric motor could be enough of a variable to affect the vehicle’s ratings.

With only one trim level for the PHEV version. The all-wheel-drive X5 xDrive45e is ready for daily jaunts around town and inclement weather. The additional piece of mind of the hands-free driver assistance system makes it worth the extra $1,700. The M Sport package at $5,500 is too rich for our blood, but we’d definitely throw in the $350 heated seats and $250 heated steering wheel that also comes with heated armrests. Finally, if you plan on towing with the X5, the tow hitch will set you back $550.

With an impressive EV-only range and enough room for a family and their gear, the X5 xDrive45e PHEV hits all the right marks. It’s quick, livable, and doesn’t require anything more than someone to plug it in at night to be ready to save some cash while commuting. Its price point also makes it cheaper than the other non-M-powered X5’s available — all while making all-wheel-drive standard. Its slow charge rate is a bummer, but it’s not a deal-breaker.

Inside, the vehicle is comfortable both in front and back, with a good blend of sportiness in a package that is geared towards the driver. The infotainment system feels a little dated because the latest version is available from BMW on its new electric vehicles. But the inclusion of Android Auto should make many potential buyers very happy after years of BMW only supporting CarPlay.

On the road, the xDrive45e PHEV delivers a BMW experience without the compromise we used to expect from hybrid systems.

Yes. The X5 xDrive45e is a wonderful mixture of BMW’s sport luxury SUV and electrification technology. It works as both a family hauler and an outstanding first or only vehicle for the individual that wants German luxury and sport with enough room for jaunts to the mountains or taking coworkers to lunch.