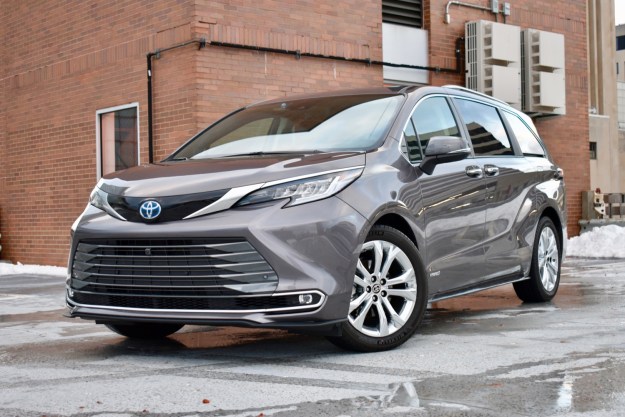 “With a standard hybrid powertrain and smart interior design, the redesigned 2021 Toyota Sienna is the perfect family hauler.”

Minivans were once a popular choice for families, but they’ve largely been replaced by three-row SUVs. While some automakers upgraded their minivans in an attempt to claw back buyers, Toyota did nothing. Now, it’s making up for lost time.

Replacing a model that went on sale about a decade ago, the 2021 Toyota Sienna represents a comprehensive overhaul, with extroverted styling and new gadgets like a built-in vacuum cleaner and 120-volt outlet, plus a standard hybrid powertrain. That should help the Sienna stand out against the SUV competition, as well as fresher minivans, including the Chrysler Pacifica/Voyager, Honda Odyssey, and Kia Sedona.

Pricing for the 2021 Toyota Sienna starts at $35,635 for a base front-wheel drive LE model, or $2,950 more than the 2020 model. That’s partly because Toyota dropped the L trim level that previously slotted below the LE. Our test car was a range-topping all-wheel drive Platinum model, with extras like leather seats, power sliding doors and tailgate, and 20-inch wheels — all for a base price of $51,635.

When Toyota designers try to make a car look exciting, they generally pile on as many styling cues as possible. Toyota’s designers tried very hard to make the 2021 Sienna look exciting. Given that many car buyers view minivans as terminally uncool, it’s hard to blame those designers for giving the Sienna the taillights from a Supra sports car and a massive grille that brings to mind the mouth of a baleen whale. Despite those disparate elements, the exterior styling is remarkably coherent, by recent Toyota standards at least.

It’s also a big contrast to the more conventionally styled minivans from Chrysler, Honda, and Kia. The Toyota is fairly close to those rivals on interior space, but with substantially less third-row headroom. This is still a cavernous vehicle, however, and as with all minivans, the Sienna offers a lower step-in height and cargo lift-over height than most SUVs.

As with all three-row vehicles, cargo space is limited with the third row in place, but the Sienna’s 33.5 cubic feet is better than the Honda Odyssey and Chrysler Pacifica, and just behind the class-leading Kia Sedona. Fold the seats down, however, and the Sienna tells a different story: With 75.2 cubic feet of cargo space with the third row folded, and 101 cubic feet with the second and third rows folded, it lags behind the competition. Toyota also doesn’t offer a power-folding third row like Chrysler, but power sliding doors and a power liftgate are available.

The Sienna starts to look more impressive the closer you get to the front. Lower-level LE and XLE models come standard in an eight-seat configuration with a second-row bench seat. Higher trim levels get second-row captain’s chairs, which reduces the total number of seats to seven. A “Super Long Slide” option allows those chairs to slide fore and aft up to 25 inches, and Limited and Platinum models get airliner-style fold-out ottomans. Those features make riding in the second row more comfortable, but they’ve also been available on the Kia Sedona since the 2015 model year.

Up front, the Sienna gets a stylish dashboard with an embedded touchscreen and what Toyota calls the “bridge,” a raised center console that holds the shifter and a smattering of cupholders. Below it, you get a rubberized storage nook big enough for a handbag. It’s an unusual setup for a minivan, but a good one. The raised console provides two levels of storage space, and puts the things you actually need to reach for — the shifter and cupholders — closer to your grasp.

Materials in our Platinum trim-level test car were impressive. The leather upholstery felt suitably fancy; rubberized, nonskid material was strategically placed; and even the plastic trim Toyota used in place of wood looked fine. However, designers could have dialed back the color palette, which includes shades of brown, beige, and gray that managed to both look dull and clash with each other.

While the exterior and interior design offered some unexpected touches, the Sienna’s infotainment system is largely the same as other recent Toyota models.

The standard setup includes a 9.0-inch touchscreen, seven USB ports, a built-in Wi-Fi hot spot, and Apple CarPlay, Android Auto, and Amazon Alexa compatibility. A 12-speaker JBL audio system, navigation, and a rear-seat entertainment system are available as options. The latter includes a single 11.6-inch monitor that folds down from the ceiling, in contrast to the dual monitors available from Chrysler.

The touchscreen was typical Toyota, meaning it was easy to use (thanks in part to shortcut buttons and a volume knob), but with bland graphics. Designers also included lots of places for the driver to place their phone, including slots in the “bridge” console’s cupholders and a dashboard shelf (which can be equipped with a wireless charging pad), but none of them really work. The slots, which allow a phone to sit upright, don’t fit larger phones, while the dashboard shelf lets phones slide around.

The touchscreen was typical Toyota, meaning it was easy to use, but with bland graphics.

Gadgets are a hallmark of modern minivans, so Toyota gave the 2021 Sienna a built-in vacuum cleaner, a 1,500-watt AC inverter (which sends power to a 120-volt outlet in the cargo area), a small fridge, and a rear-seat intercom (that carriers over from the previous-generation model). That said, the fridge and vacuum won’t be available at launch due to a supplier issue. Honda and Chrysler have also offered built-in vacuums for years.

Because the Sienna is a fairly large vehicle, it’s also important to talk about cameras. Our test car had the optional 360-degree camera system, which had good camera angles but a low-resolution display. The Sienna is also the latest Toyota model to get a video rearview mirror, which can switch from a conventional mirror to a video display at the flip of a switch. That lets the driver see what is directly behind the car without obstructions like roof pillars and passengers’ heads. It was particularly useful in the Sienna, with its small rear window.

One of the biggest changes to the Sienna for 2021 is under the hood. Toyota replaced the old 3.5-liter V6 engine with a hybrid powertrain based around a 2.5-liter four-cylinder engine. That’s the only powertrain available, making the Sienna one of a handful of new cars available exclusively as a hybrid. You do get a choice of front-wheel drive or all-wheel drive, however.

Toyota quotes a total-system output of 245 horsepower. That’s 51 hp less than the nonhybrid 2020 model, and less than a nonhybrid Chrysler Pacifica, Honda Odyssey, or Kia Sedona, all of which use fairly large V6 engines. It doesn’t seem to matter, however.

If you’re concerned about lack of power, consider that the Sienna has a 3,500-pound towing capacity — the same as an Odyssey or Sedona. The Pacifica is rated to tow more, but only by 100 pounds. The Sienna also has the same towing capacity as the similarly sized Toyota Highlander Hybrid, proving that you don’t always need an SUV to tow.

The Sienna’s gas mileage blows the competition away.

Granted, we would have liked a bit more power for highway overtaking, where the Sienna felt adequate but not enthusiastic. That was the only powertrain issue, however. The hybrid system made the Sienna feel like an oversized Toyota Prius — which is a good thing. The interplay of gasoline engine and electric motors might feel a bit alien to drivers used to nonhybrid cars, but the powertrain tuning ultimately encourages smooth, fuel-efficient driving.

Unlike the Prius, Toyota didn’t bother trying to make the Sienna feel sporty. That means you just get a comfortable ride, which is probably what most prospective minivan buyers are looking for anyway. We did notice some slight shuddering over bumps, and the steering didn’t feel as taut and precise as the Chrysler Pacifica’s.

As with other Toyota hybrids, the Sienna also gets a 10-year, 150,000-mile battery warranty and an eight-year, 100,000-mile warranty for other hybrid-system components.

Priced at over $50,000, our Sienna Platinum test car showed that a minivan can be properly luxurious — if you’re willing to pay luxury -car prices. It’s possible to cut down that price, however, by losing some of those extras.

We’d go a few rungs down the trim ladder to the XSE trim level. It gets the same hybrid powertrain and driver-assist tech as the Platinum (and all other Sienna trim levels), as well as the “Super Long Slide” second-row seats, navigation, four-zone automatic climate control, and heated front seats.

We’d then add the XSE Plus Package ($1,000), which includes wireless phone charging and the 1,500-watt inverter ($300). All-wheel drive is a $760 option on the Sienna XSE, and is also worth considering if you live in a snowy climate.

The 2021 Toyota Sienna doesn’t redefine the minivan, but this long-overdue redesign brings Toyota up to speed with the competition.

The Chrysler Pacifica is available with a plug-in hybrid powertrain and “Stow ‘n Go” folding seats, but those features aren’t available together, and you can’t get an all-wheel drive Pacifica Hybrid, either. The Chrysler is also marginally nicer to drive than the Toyota, but with a much poorer reputation for reliability. For budget-minded buyers, the Chrysler Voyager is a decontented Pacifica with a substantially lower base price than the Sienna.

The Kia Sedona is beginning to show its age, but it’s still competitive on interior space and gets Kia’s longer warranty.

Regardless of brand, minivans remain a great alternative to SUVs for large families. What they lack in rugged style, they make up for in practicality. The Sienna has more total passenger volume than Toyota’s own Highlander, and its lower ride height, sliding doors, and wider tailgate aperture will make loading and unloading people and stuff easier.

Yes. The Sienna is a great family car.