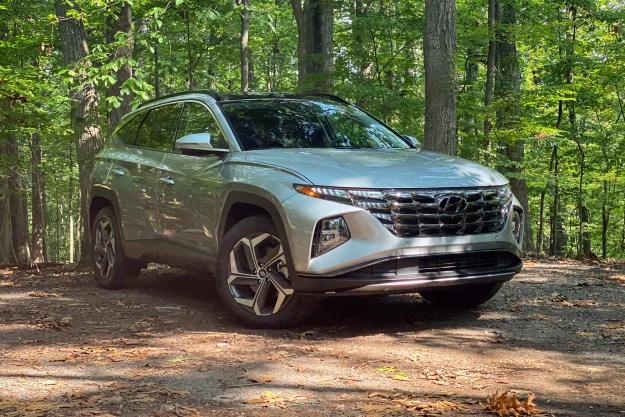 “The Tucson Hybrid sets the bar with efficiency and power heaped with tech.”

Hyundai’s designers have made their mark as some of the best in the business over the past few years. Outlandish designs, though, only get you so far.

Good thing the fully redesigned 2022 Hyundai Tucson Hybrid is so much more than just a pretty face. There’s a lot of substance underneath. So much so that the Tucson Hybrid sets the high-water mark in its class. In the pursuit of improved fuel economy, the Tucson Hybrid also arrives with a healthy boost of power over the regular Tucson.

The compact hybrid scene is still relatively new. Only a few rivals exist, and all of them match or improve on the Tucson Hybrid’s fuel economy figure. There’s the Ford Escape Hybrid, Toyota RAV4 Hybrid, and Honda CR-V Hybrid. Not exactly a crowded market, but these are some heavy hitters. Seeing the Tucson Hybrid do more than just hold its own against such an established bunch speaks volumes to how far the model has come compared to the previous generation.

The base 2022 Tucson Hybrid starts at $30,235 with the required $1,185 destination fee. Our test car, with exceptionally plush carpeted floor mats, was the range-topping Tucson Hybrid Limited, which carries a $38,730 price tag.

With so many SUVs on the roads these days, designers are having a hard time finding ways to make their models distinguishable from others. Others may clearly be struggling, but Hyundai’s designers are thriving, churning out hits at an impressive rate. When we say the Tucson Hybrid looks unlike anything else on the market, we mean it. The Tucson and the Santa Cruz, which are identical twins, even look like odd ducklings in the Hyundai family.

Usually, something that looks this good requires some kind of compromise on the inside.

It kicks off with the strange grille that has a jewel-like surface and is part of what Hyundai is calling a “Parametric Dynamics” design. The SUV’s daytime running lights are integrated directly into the grille for a mesmerizing look at night. The rest of the package is just as impressive, with enough wedges and chiseled lines to cosplay as a ‘190s sports car.

Usually, something that looks this good requires some kind of compromise on the inside. Thankfully, there’s no compromise to be found. Unlike the plug-in hybrid powertrain that eats into cargo space, the hybrid matches the regular Tucson. There’s 38.8 cubic feet of cargo space behind the rear seats and a total of 74.5 cubic feet of cargo space with the rear seats folded down. Passengers in the back get 41.3 inches of rear legroom, more room than all of the Tucson Hybrid’s direct competitors.

The interior design of the Tucson Hybrid may not inspire the same shock and awe as the exterior, but it feels notably upscale for a compact hybrid at this price point. Our Limited test trim came with features that included leather upholstery, a heated steering wheel, heated rear seats, a panoramic sunroof, a power liftgate, and ventilated front seats. The natural curve of the air vents and the flow of the center console look modern while remaining functional. Materials also feel upscale, as others in the segment tend to use hard plastics that look and feel unsightly. A few gloss-black panels are a magnet for fingerprints, but that’s the largest issue we could find.

While the 10.25-inch touchscreen is one of the reasons to upgrade to a higher trim, the 10.25-inch digital instrument cluster feels like it could be more useful.

The larger touchscreen offers crisp graphics and simple menus, but you lose knobs and traditional buttons for functions like adjusting the volume and tuning the radio. All of the buttons on the SUV’s center console are touch-sensitive and finicky to use. The volume buttons, for instance, require you to press them multiple times to create a meaningful increase or decrease in the audio’s system volume. The smooth look of the center console is appealing, but we’d rather have traditional switchgear.

While the 10.25-inch touchscreen is one of the reasons to upgrade to a higher trim, the 10.25-inch digital instrument cluster feels like it could be more useful. For instance, it lacks the customization Volkswagen offers in its Digital Cockpit instrument cluster. The available Bose audio system sounds good, but I still remember the old Harman Kardon system quite fondly. Still, if you’re more interested in tuning things out than pumping the cabin with noise, Hyundai has a unique “sounds of nature” setting to play calmer sounds like “rainy day,” “warm fireplace,” and “lively forest.”

Hyundai offers its SmartSense suite of advanced safety features on a lot of its vehicles, though the features the suite includes differ based on the car. Standard safety features on the Tucson Hybrid include forward collision warning, automatic emergency braking, adaptive cruise control, pedestrian detection, lane keeping assist, blind spot monitoring, and rear cross traffic alert. Safe Exit Warning, which warns you if you’re about to open the door as a vehicle is approaching from behind, is also standard.

Higher trim levels, like the Limited we tested, come with parking sensors, a surround-view parking camera, and remote smart park assist. While the system doesn’t work nearly as seamlessly as it does in the ads, it can be helpful for making sure you’ve left enough space in tight spots.

The Tucson Hybrid comes with a turbocharged, 1.6-liter four-cylinder engine and a 44.2-kW electric motor for a combined output of 226 horsepower. The engine is paired with a six-speed automatic transmission, with all-wheel drive coming as standard. That figure makes the Tucson Hybrid one of the more powerful hybrids in its class. The CR-V Hybrid (212 horsepower), RAV4 Hybrid (219 horsepower), and Escape Hybrid (200 horsepower) all fall slightly behind. It even bests the regular gasoline Tucson by 39 horses.

Not surprisingly, it also delivers more pep in a straight line than the regular Tucson. The hybrid powertrain flexes the majority of its muscle off the line, but still has plenty of passing power on the highway. Unlike other hybrids, the drivetrain in the Tucson Hybrid uses a six-speed automatic transmission instead of a continuously variable automatic transmission (CVT). It delivers well-timed shifts, which can be an issue with CVTs, and even lets you manually shift with paddles behind the steering wheel, though they feel out of place.

Whether driving around town or completing the last leg of a road trip, the Tucson Hybrid delivers a comfortable, smooth ride. The way the SUV cruises in a refined manner makes it feel like still remembers a few things from past cotillion classes. The hybrid powertrain keeps things quiet on the inside, but a sharp kick to the throttle pedal brings a fair amount of engine noise into the cabin.

In testing conducted by the Insurance Institute for Highway Safety (IIHS), the 2022 Tucson received a “Top Safety Pick+” rating. The SUV earned “Good” scores in all of the crash tests and the top score of “Superior” for its front crash prevention technology. Headlight ratings range from “Acceptable” to “Good.” The National Highway Traffic Safety Administration (NHTSA) has not crash-tested the 2022 Tucson yet.

Since the Tucson Hybrid gets slightly worse fuel economy than its rivals and comes with wireless Apple CarPlay and Android Auto with the smaller touchscreen, we think the base Blue trim is the best bet. It’s not like it skimps out on features either, as it comes with heated front seats, dual-zone climate control, four USB ports, Hyundai’s SmartSense suite of safety features, and a power-adjustable driver’s seat.

The 2022 Hyundai Tucson Hybrid isn’t the most fuel-efficient compact SUV on the market, but it’s still one of the best options. Not only is it more enjoyable to drive and more refined than other choices, but it also offers more power and more impressive technology. It’s the gold standard for the segment.

The Toyota RAV4 Hybrid, Ford Escape Hybrid, and Honda CR-V Hybrid all match or have better fuel economy figures than the Tucson Hybrid. But they all offer smaller cargo areas, less rear legroom, smaller touchscreens, and wired-only smartphone compatibility. The Escape Hybrid and RAV4 Hybrid are slightly more affordable than the Tucson Hybrid, but have interior materials that match their lower prices.

Unless you’re looking to go upstream with a luxurious hybrid from Lexus, BMW, Mercedes-Benz, Lincoln, or Volvo, the Tucson Hybrid is the best bet in the affordable compact class.

Yes. The Tucson Hybrid is the best of its kind.

Business upfront, 31-inch TV in the back. BMW’s electric i7 is a screening room on wheels
GMC poured all of its truck-making expertise into the Sierra EV pickup
Check out Spectre, Rolls-Royce’s first all-electric car
2023 Kia Niro EV first drive review: Practical doesn’t have to bore you to tears
Uber says it’s investigating ‘cybersecurity incident’
Nvidia’s Drive Concierge will fill your car with screens
The Uber hack is an outrageous tale of a teen hacking for fun
Tesla to fix window software on 1M of its U.S. cars
Lux and refreshingly livable, Mercedes’ EQE moves EVs mainstream
How to watch Tesla’s AI Day tonight and what to expect
2023 Audi Q4 E-Tron first drive: the predictable and traditional EV SUV we need
We need more 7-passenger EVs, but the 2023 Mercedes EQS SUV has room to improve
Tesla AI Day 2022: Optimus, self driving cars, and everything else announced