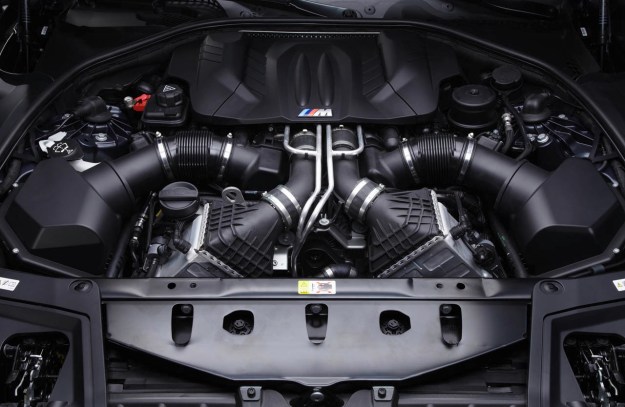 They say there’s no replacement for displacement, but carmakers are being forced to prove that assertion wrong. Tightening emissions and Corporate Average Fuel Economy (CAFE) standards mean even the makers of high-end performance cars are downsizing. While making an engine smaller seems like the wrong way to build a performance car, this trend actually has plenty of upsides.

Before computers made cars smart, size was the primary tool used to make power. Early cars like straight-eight Duesenbergs and V16 Cadillacs required massive engines just to produce the power of a modern four-cylinder. The trend reached its peak with 1960s American muscle cars and 1970s Italian exotics, whose fleetness came from big-displacement V8 and V12 engines. Making an engine bigger is just the easiest way to make more power, and before the advent of the EPA there was no need to do otherwise. Plus, a direct correlation between engine size and horsepower also makes it easier to claim bragging rights.

Limiting displacement doesn’t just deprive buyers of the opportunity to brag about the size of their engines. For performance specialists like BMW M and Mercedes-Benz AMG, who made their reputations building cars with less-than environmentally friendly powertrains, it also forces engineers to break some of their golden rules.

Plus, while everyone wants to live on a planet that’s still habitable, the kinds of people that buy M5s and E63 AMGs aren’t really affected by gas prices. If they were, they wouldn’t be purchasing these already-expensive luxury performance cars.

In other words: why should anyone who can afford a sedan with the accelerative capabilities of a supercar really care if it gets good fuel economy?

BMW swore that it would never put a turbocharger on any of its race-inspired M cars. Considering that the original E28 M5 used the 3.5-liter inline-six from the M1 supercar, it’s easy to see why. High revving, naturally-aspirated engines were an M signature.

A turbocharger is basically a fan, driven by exhaust gases, that blows more air into the engine. Since air is one of the two ingredients of internal combustion (the other being fuel), stuffing more air and gas into the engine means a bigger boom- and more power without the need for a bigger engine.

However, to keep producing supercar-worthy numbers, M needed to put increasingly larger engines into its cars. The previous generation E60 M5 had a 5.0-liter V10. Like the E28’s engine, it was naturally-aspirated, loved to rev, and its configuration was inspired by the engines BMW was using in its Formula One cars.

So when BMW announced that the current F10 M5 would ditch the V10 for a twin-turbocharged V8 (from an SUV, no less), fans were upset. It turns out they had nothing to worry about.

Granted, the 4.4-liter V8 isn’t that much smaller than the 5.0-liter V10, but that doesn’t make the new motor’s prodigious torque any less surprising. That added turbo-boosted torque also helps the new M5 outperform its predecessor.

AMG, Mercedes-Benz’s counterpart to BMW M, has its own traditions, and they tend to revolve around the number 63. The 1968 300SEL 6.3 was the fastest sedan of its time and, by packing a massive engine (taken from the dictator-spec 600 limo) into an ordinary sedan chassis, it became the prototype for all Mercedes sports sedans to come.

So when AMG introduced a big V8 of its own in 2006, it referred to all of the models that used it as “63s,” even though the engine itself only displaces 6.2-liters. It also powers the SLS AMG sports car. A tough act to follow, then.

More efficient engines aren’t the only upside of downsizing. When Audi took the 4.2-liter V8 out of its S4 and replaced it with a turbocharged V6, it turned a car that was ferociously powerful but unbalanced into a better all-around driving machine.

Sticking that V8 in the nose of the already front-heavy A4 upset the 2003-2009 S4’s weight distribution, negatively affecting handling. It also made the even more expensive RS4 seem less special. The current car has none of those problems.

Haven’t we heard this before?

So concerns over emissions and fuel economy are goading carmakers into creating more efficient performance vehicles with technology, specifically turbochargers. It may sound like a modern success story, but it’s nothing new.

The 1970s brought trauma to the car world in the form of oil crises and carbureted, low-tech V8s strangled by pollution control equipment. As the decade of Ronald Reagan approached, carmakers began searching for a better way to make power.

In 1978, Saab launched the 99 Turbo, which unleashed a decade of turbocharging mania. Even Buick got in on the act, building the Grand National and GNX. American muscle cars with turbo V6s? With a 4.6-second 0 to 60 mph time, the 1987 GNX is still quick by today’s standards.

Volkswagen brought electronic fuel injection (EFI) to the original Golf GTI in 1975. This not only allowed the GTI’s microscopic 1.6-liter engine to produce 108 hp, it also gave it unprecedented reliability.

The “electronic” in EFI is code for computer control. A computer uses sensors to monitor combustion and make constant adjustments to the fuel delivery, so the whole process is much more precise. Unlike the carburetors they replaced, EFI systems also inject fuel under pressure. In carbureted cars, fuel can sometimes slosh around as the vehicle goes around corners, cutting off the flow, but that’s not a problem with fuel injection. That’s why EFI is the standard on all cars today.

Now, “direct injection” technology is taking fuel injection to the next level of efficiency and power production. Think of it as EFI 2.0. While fuel injection systems mixed fuel with air before it went into the cylinder’s combustion chamber, direct injection sprays a precise amount of fuel directly into the combustion chamber (hence the name), further increasing efficiency. It’s available on the current VW GTI Mark 6, the F10 M5, the 2014 E63 AMG, and many other cars.

Turbo and EFI technologies launched a wave of imitators, making the letters “GTI” synonymous with cheap speed, and the word “turbo” as quintessentially ‘80s as Duran Duran.

When buyers looking for a fast car began turning their attention to Volkswagen Golfs and Buick Regals, all must have seemed lost. But things turned out pretty well, just as things are turning out pretty well with this latest round of turbocharged and now direct-injected performance cars.

For now, the downsizing trend looks like it will continue. BMW is expected to replace the current M3’s 4.0-liter V8 with a six-cylinder engine when a new version of that car debuts in the near future. Mercedes-AMG will yank the big 6.2-liter V8 from the SLS and C63 AMG, replacing it with a 4.0-liter twin-turbocharged V8.

Will this trend continue? Will technology allow performance engines to get even smaller? Will the 2025 M5 have a 2.0-liter inline-four?

Probably not. At some point, engines will have to stop shrinking if they’re going to maintain their astronomical power ratings. No internal combustion tech on the horizon can do that unassisted.

However, a smaller engine teamed with an electric motor is a possibility. That’s right: a hybrid. No major manufacturer has a hybrid sports sedan on the drawing boards right now, but with a raft of hybrid supercars like the Ferrari LaFerrari, Porsche 918 Spyder, and McLaren P1 taking the world by storm, it’s not impossible. For now, though, AMG is abstaining.

A future M5 or E63 AMG could even be all-electric. A Tesla Model S Performance does 0 to 60 mph in 4.2 seconds, after all. Of course, there are many obstacles such as cost and range anxiety, and the question of whether performance car buyers would even want such a car, but it is technically possible.

Apparently, there are many replacements for displacement.