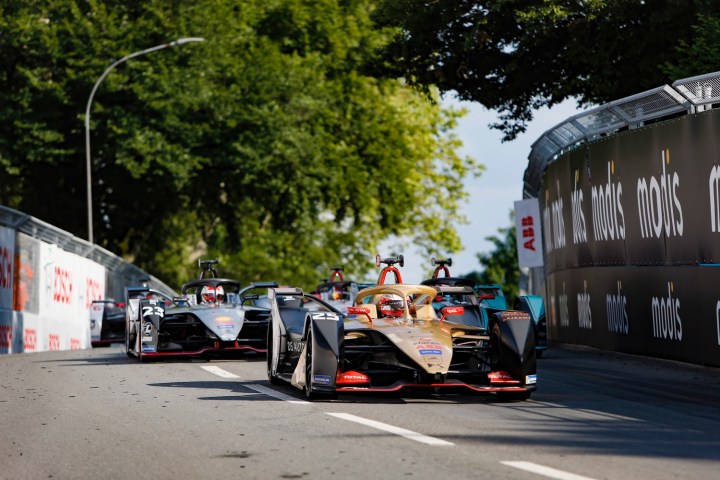 Like everyday road cars, race cars rely on software. The storied bond between driver and machine has been augmented with quite a lot of code. Race teams also log massive amounts of data in order to monitor the health of their cars and improve performance. All of that data needs to be protected, which is where Acronis comes in.

It’s a hot July day in New York City’s Brooklyn borough. Formula E electric race cars are being prepped to go out on track for a practice session. When they come back, it’ll be time to pull data from them. Acronis provides different services, such as security, data backup, ransomware protection, and disaster recovery to businesses. But it was also in the garages of three of the teams racing in the Big Apple — Nio, Venturi, and DS Techeetah. Acronis claims its software helps Formula E teams protect their data, as well as analyze it.

Data analysis is an important part of any team’s strategy. Engineers search data for ways to tweak a car for better performance, diagnose issues, or coach drivers into getting the most out of the car. In Formula E, sensors monitor everything from the position of the throttle and brake pedals to the temperature of the battery pack. Teams fit cars with up to 150 sensors for testing, although that number is reduced to around 50 or 60 sensors for actual races, according to an Acronis blog post.

Unlike in some other forms of racing, Formula E doesn’t allow teams to stream telemetry in real time from the car as it’s going around the track. Instead, data is recorded in an onboard logger, and downloaded when the car returns to the garage. Each of the Nio team’s two cars generates 200 Mb of data in the pre-race qualifying session, and 1 Gb during the race itself, according to Acronis. Formula E rules also restrict the number of people allowed to comb through the data. To keep costs down, teams are only allowed to have 20 people actively working on the cars. Nio (which also sells electric road cars in China) assigns five engineers to each car, according to Acronis.

Formula E race cars go through a lot of abuse, which can lead to malfunctioning sensors. That could leave a team unable to monitor a critical aspect of a car, or wasting time with bad information. Acronis developed a software tool designed to recognize faulty sensors. Data from properly functioning and malfunctioning sensors was fed into a machine-learning algorithm, in order to teach it to identify signs of sensor trouble, according to Acronis.

Racing isn’t just about horsepower (or, in the case of Formula E, kilowatts). Teams will use any advantage they can get, and advantages are increasingly found in the troves of data generated by modern race cars. It’s not just Formula E: Formula One teams rely heavily on data analysis, too. Acronis claims its software saves the Racing Point team 156 hours per year by making data backup easier.