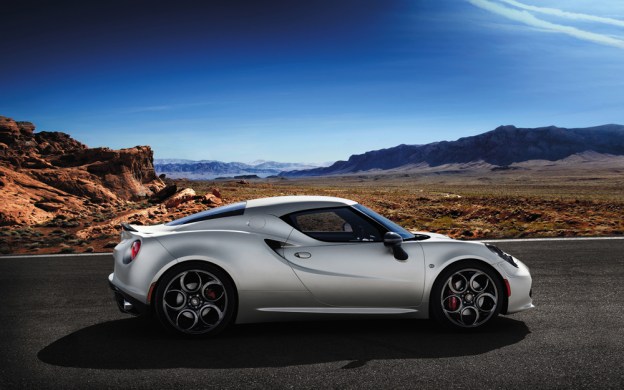 Most people only know Alfa Romeo as the company that made the car Dustin Hoffman drove in The Graduate, but the Italians want to change that. This division of Fiat hopes to rejoin the mainstream by massively increasing its sales, and that could yield new models for buyers to choose from.

Alfa Romeo hopes to sell 300,00 cars per year by 2016, Louis-Carl Vignon, the man in charge of the brand, told Automotive News (sub. required).

That won’t be easy, because right now Alfa only makes two cars: the MiTo city car and Giulietta compact hatchback. If all Alfa can offer customers is two sizes of front-wheel drive hatchback, it’s not going to meet its target.

Alfa is also working on the 4C, a mid-engined sports car that was unveiled in production form at the 2013 Geneva Motor Show. However, while it will boost Alfa’s credibility in the eyes of car enthusiasts, the 4C will not be a volume model.

Luckily, Alfa has a slew of new models waiting in the wings, and they will all be coming to the United States. Next up will be a rear-wheel drive sports sedan designed to compete with the BMW 3 Series and replace the old 159. Called Giulia, it will also be available as a wagon.

Alfa will also reportedly build a larger sedan to compete with the BMW 5 Series. It will be based on the Maserati Ghibli, but will probably have less-aggressive engine options to keep it from overshadowing the Maser and to keep costs down. Four-cylinders and a few diesels (at least in Europe) seem likely.

The midsize sedan might not be the only instance of Maserati-Alfa platform sharing. Back in February we reported that Fiat was considering an Alfa twin of the Maserati Levante SUV. Alfa will probably need an SUV to compete in the crossover-happy U.S. market.

The return of Dustin Hoffman’s Spider is also likely. Alfa and Mazda have agreed to share development costs of a new two-seat roadster, just like Subaru and Toyota did with the BRZ/GT86/Scion FR-S; the Spider will be twinned with the next MX-5 Miata.

A lineup of rear-wheel drive sports sedans and sports cars sounds enticing, but Alfa will have to expand even further if it wants to be more than a niche brand. One thing that’s missing from the plan so far is a green option.

At the very least, Alfa will need a hybrid or EV to comply with the 54.5 mpg Corporate Average Fuel Economy (CAFE) requirement that takes effect in 2025. It will also need one just to stay competitive.

BMW is already selling hybrids, and plans to put plug-ins and EVs on the market soon. If Alfa wants to compete with the Bavarians on performance, can it avoid losing sales by not competing with them on economy?

A more powerful Mac Mini is in the works, and could be coming soon