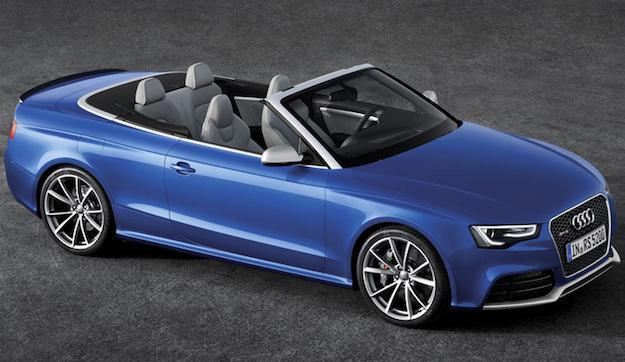 Audi has taken the covers off its fastest convertible RS model yet, the Audi RS5 Cabriolet, during a live online event yesterday. Its debut comes just a few weeks before the 2012 Paris Motor Show, where the general public will get their first look at the new car in the metal.

Chopping the roof off the RS5 will inevitably lead to a slightly less focused driving experience over the coupe, but as the convertible has retained the stunning 4.2 liter V8, the pace isn’t too badly affected. Audi claims a 4.9-second 0-60 miles-per-hour time, with the 444 horsepower motor charging to an electronically limited top speed of 155. If you fancy stretching the car a little more, then Audi will lift this limit for a fee, and you can speed on to 174 miles-per-hour.

The V8 is mated to a seven-speed S Tronic dual clutch transmission, and Audi’s Quattro four-wheel drive system, and there is the option to add a sporty rear differential too. Surprisingly, given this is a heavier convertible, the economy is almost identical to its hardtop brother at 25.9 miles-per-gallon.

Audi has worked hard to keep the weight as low as possible, with aluminum front wings and a set of clever “petal” shaped brake discs, which save 3kgs of unsprung weight on their own. Car Magazine estimates that the coupe is 200kg lighter than the new convertible, but Audi hasn’t released any official figures yet.

Buyers will get to choose between a black, grey, brown or red canvas roof, and eight different body colors, while the Cabriolet has also been given LED rear lights, xenon front lights, new 20-inch rims and a carbon fiber rear spoiler. The RS styling at the front and rear, plus those sizable oval exhausts help separate it from the basic A5 Cabriolet, and inside are seats and a steering wheel which are unique to the cabrio too.

The RS5 Cabriolet goes on sale early next year in Europe, but despite rumors, Audi has yet to confirm whether it’ll make it to the USA or not.