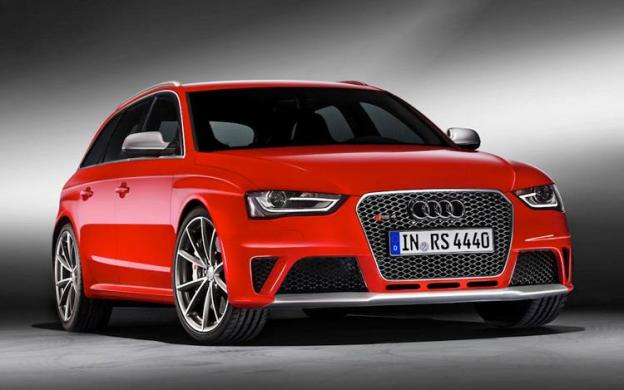 Audi unveiled the 450 horsepower RS4 Avant at the Geneva Motor Show earlier this year, but so far it’s been a no-go for the wagon-averse United States. That may be changing, though. The forum QuattroWorld published photos of an RS4 that appeared this past Saturday at a Virginia Cars and Coffee meet not far from Audi’s U.S. headquarters.

The car that showed up at the Virginia gathering with its bulging fenders and copious “RS” badges, wore a Michigan “M” plate, designating it as a manufacturer-owned test vehicle. The car was reportedly a German-spec production model RS4.

Why get so excited over a station wagon? The RS4 Avant is essentially a wagon version of the ballistic RS5 coupe Audi just launched in the U.S. That means it packs a 4.2-liter V8 with the aforementioned 450 horses, plus 317 pound-feet of torque. Backing the engine is a seven-speed dual-clutch automated-manual transmission. Audi’s trademark quattro all-wheel drive gets a bonus torque-vectoring rear differential for more precise control on twisty roads.

The result is an unbelievably fast car with room for 2x4s. European-spec RS4s top out at an electronically-limited 155 mph, or 174 mph if owners pay extra to have the limiter raised. The RS4 can sprint to 62 mph (100 kph) in less than five seconds.

The RS models are Audi’s answer to BMW’s M, Mercedes-Benz’s AMG, and Cadillac’s V performance sub-brands. In the past Audi, deliberately built the RS4 as a wagon only to avoid direct competition with the heavy hitters from BMW and Mercedes. But if the current RS4 Avant makes it to the US, it will have a direct competitor of its own: the Cadillac CTS-V wagon.

The CTS-V packs 556 hp, does 0 to 60 mph in 4.1 seconds, and can reach a top speed of 185 mph. However, the two cars are very different in character. From its trick transmission and all-wheel drive system to its bevy of driver aids, the RS4 brandishes technology to get the job done. The CTS-V is hairy-chested, with a manual transmission (or optional automatic) and rear-wheel drive.

A fight against the CTS-V should reason enough for American enthusiasts to pine for the RS4 Avant, but it would also help establish the RS brand in the U.S. Right now, the Lord of the Rings only has the RS5 and TT RS, while Mercedes has a full line of AMG models and BMW has the more practical M3 and M5. Audi’s current line of “S” models (S4, S5, S6, S7, S8) are a little softer than the beasts from Bavaria.

Will the RS4 really make it to the States? Audi does have a habit of launching performance models in Europe first, then waiting to bring them to the U.S. The RS5 launched over there in 2010, but it wasn’t imported over here until this year. Audi could be following the same pattern with the RS4, or it could just be teasing people who live near its headquarters. Stay tuned.

Every car compatible with Apple CarPlay