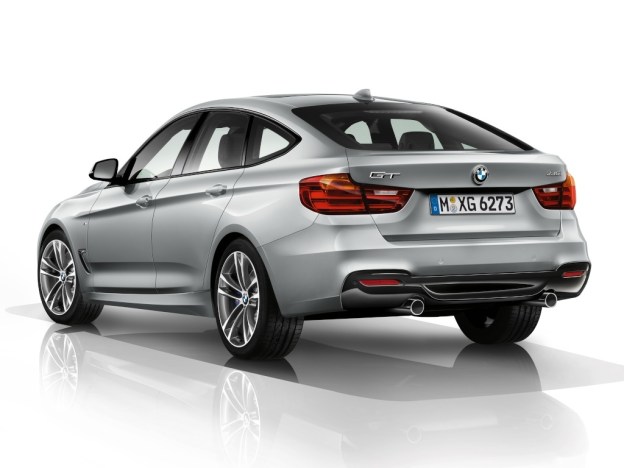 Car forum Worldscoop has leaked photos of the BMW 3 Series GT, a hatchback version of BMW’s bestselling luxury car. This latest addition to the 3 Series lineup wasn’t supposed to see the light of day until the Geneva Motor Show in March.

Maybe it should have stayed that way. BMW launched the “GT” concept a few years ago with the 5 Series GT, and that is anything but pretty. The 3 Series GT applies that concept to BMW’s smaller sedan, resulting in a car that is equally misshapen.

With both cars, BMW tried to package the practicality of a wagon with a sportier sloping roofline. Instead, it made the rakish 3 and 5 Series look swollen; the roofline looks too high and the massive tailgate doesn’t help matters.

It’s also hard to tell who will actually buy a 3 Series GT. BMW offers more utilitarian vehicles that are roughly the same size, including the 3 Series wagon and the X1 and X3 crossovers. BMW does say that the GT will have more rear seat and cargo space than the wagon.

Like the 6 Series Gran Coupe, the 3 Series GT is a niche product, for those who want to emphasize style. The 5 Series GT hasn’t exactly set the sales charts on fire, so it will interesting to see if the 3 Series GT can make this niche seem sensible.

The GT nomenclature is also a bit misleading. GT, which stands for “Grand Touring,” used to denote sporty cars that were also comfortable enough to drive long distance. The Maserati GranTurismo and Aston Martin Vanquish are good examples.

Now, GT seems to be code for hatchback. In addition to BMW’s two GTs, there’s Hyundai’s Elantra GT. Who ever thought a front-wheel drive economy car would share a name with a Maserati?

At least the 3 Series GT is still a 3 Series. That means it gets one of the best sports sedan chassis in the business. BMW hasn’t announced the U.S. engine lineup, but the regular 3 Series is available with either a 240 horsepower turbocharged inline-four, or a 300 hp turbocharged inline-six.

The GT is also expected to offer a more premium feel than other models. It may be the most expensive non-M3 model in the lineup. Alternatively, an M Sport model will offer more aggressive bodywork, and possibly one less seat.

Will American buyers make sense of the 3 Series GT, or will they stick with their sedans and crossovers? We’ll find out when this crossbreed hits U.S. dealers later this year.