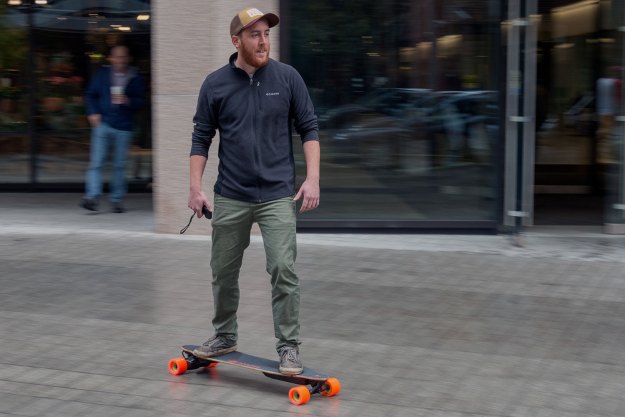 Pros
Cons
If you’ve seen anyone on an electric longboard in the past few years, chances are that the board they were riding was from Boosted. The company was one of the first on the scene when the rideable tech revolution started to take hold back around 2012, and has since grown to become one of the most popular electric longboard brands on the planet.

Boosted has continued to improve on its original design, and it released its second-generation board in 2016. Since then, a number of of competitors have sprung up to steal the company’s thunder. So, does the Boosted 2 Dual+ still stand out from the rest of the pack? We ripped one around PDX for a couple weeks, and pitted it against a handful of other high-end electric skateboards to see how it compares.

This board has a lot going for it. For starters, It’s outrageously powerful. Two 1,000-watt DC motors make this beast burly enough to hit 22 miles per hour, which might not sound like a lot — but when you’re riding just a couple inches off the ground, 22 mph may as well be 60. These motors also allow the board to charge up relatively steep hills (25% grade) with ease.

The board is also equipped with a”automotive-grade” lithium batteries that’ll get you about 12-14 miles on a single charge. The new generation also boasts three onboard microprocessors, a multitude of sensors, and mobile connectivity. Yup, you can connect it to your smartphone to tweak performance settings.

On paper, these features make it look pretty damn appealing — but really, what makes this board stand out is the way it rides. Boosted built in a number of little design flourishes that might not seem particularly significant when considered individually, but taken together, they add up to a supreme riding experience.

The first thing that struck us about this board was its deck. Made from 100 percent bamboo, it’s not only springy and strong, but it also provides a playful, highly responsive ride. We realize that  bouncy decks might not appeal to everyone, but Boosted has done a good job of straddling the line between flexy and stiff here. The deck is certainly on the springy side of the spectrum, but not so much that you’ll feel like you’re riding a trampoline.

The Boosted Dual2+ is also very well balanced. Due to careful positioning of the battery and motors, the board is easy to pick up and carry under your arm — something that can’t be said of far too many electric skateboards on the market right now. Having the ability to easily carry your board around is paramount if you plan on using your board to commute, or really, do anything more than indulging in some uninterrupted cruising on perfectly flat pavement.

Hands down, the best thing about the Boosted board is its finely tuned and carefully designed control system. In just about every other board we’ve tried thus far, the handheld controller is more of an afterthought than anything. 99 percent of the time, you get a flimsy Bluetooth joystick controller with basic forward/back functions — but that’s not the case with the Boosted 2 Dual+.

This bad boy comes with a proprietary wireless controller that boasts a number of notable features. First and foremost, it eschews a simple joystick in favor of a more dynamic wheel and trigger system. The wheel determines the amount of acceleration, while the trigger makes that acceleration kick in. Roll the wheel forward, but don’t hold down the trigger, nothing will happen.

This is nice for a couple reasons. The first is that you can’t accidentally bump the throttle and send yourself flying. Second, the large wheel allows for more fine control over your speed. Boosted’s board isn’t nearly as touchy as the other longboards we’ve ridden.

Speeding up and slowing down

The controller is just one half of the equation. In addition to Boosted’s well-designed throttle mechanism, the board’s motors are exquisitely well-tuned — so much so that we dare say they offer the smoothest acceleration and deceleration of any electric board we’ve ever ridden. On most boards, you’ll experience a bit of a jarring effect when you hit the throttle or brakes, no matter how hard or soft you try to accelerate. This is especially pronounced when starting from a dead stop. More often than not, the average board will speed up too quickly for your muscles to adjust, thereby throwing you off balance — but we experienced no such effect with the Boosted 2 Dual+.

Now to be fair, it’s definitely still possible to accelerate or brake too quickly and send yourself face-first onto the pavement, but Boosted’s smooth controls lower this risk in comparison to most other boards. Even if you’re quick and heavy on the throttle or brake, the Boosted 2 Dual+ will generally accelerate in a steady, gradual manner that doesn’t throw you off balance.

Bringing yourself to a gentle stop doesn’t require an ultra-delicate touch on the decelerator — you can actually mash the brakes fairly hard without flying off the front of your board, because the motors slow you down in a gradual (but still strong) way.

As an added bonus, the board’s software can be tuned to suit different users. If you’re a beginner, you can limit the board to a top speed of 11 mph, and make acceleration/deceleration even more gradual than it usually is. If you want a bit more speed, but don’t want to eat up all your battery power, just put the board in Eco mode; it’ll top out at 16 mph, but leave you enough oomph to power up moderately-sized hills. And if you’re a real ripper, you can kick the board into either Pro or Expert modes — both of which will get you up to (or over) 20 miles per hour. Toggling between these modes is as easy as pressing a button on the controller.

Boosted’s burly, belt-driven wheels are a bit of a double-edged sword. On the one hand, they’re the key to the board’s powerful, hill-happy, and supremely smooth drive system, but on the other hand, they’re also the cause of a few notable downsides.

First and foremost, the Boosted 2 Dual+ isn’t great at coasting. The belted wheels provide a good deal of friction when you ease off the throttle, and while it’s not enough to throw you off balance, you’ll definitely feel the deceleration — like the road suddenly turned into molasses. This also means that the board isn’t particularly easy to push when it’s unpowered. Granted, if you’re diligent about keeping your battery charged up, you won’t need to manually push the board at all, but even so, it’s nice to have that ability when you need it — even if it’s just a couple starter kicks to get you rolling before you hit the gas.

The other downside is the noise. Boosted’s motors, while undeniably powerful, are also quite loud. In fact, they’re among the noisiest we’ve ever experienced on an electric skateboard. At low speeds, and while starting from a dead stop, the motors let off a noticeable groan. At high speeds, it’s a full-on electronic whine. It’s annoying, but it does help alert pedestrians (and slow cyclists) that you’re approaching from the rear, and we found that most people will naturally make way when they hear a motorized monstrosity coming up behind them. So if you don’t mind drawing attention to yourself, Boosted’s boisterous board does have some benefits to it.

Despite the fact that it’s nearly a year old at this point, the Boosted 2 Dual+ is still one of the best electric longboards on the market right now. Sure, it’s a little loud and sucks at coasting — but these flaws are largely overshadowed by the board’s virtues. Between its fantastic deck, outstanding controls, and supremely smooth throttle/braking system, Boosted’s flagship longboard offers one of the most polished riding experiences you’ll find right now. So if you don’t mind the relatively large price tag of $1,500, then this board is definitely worth your consideration.