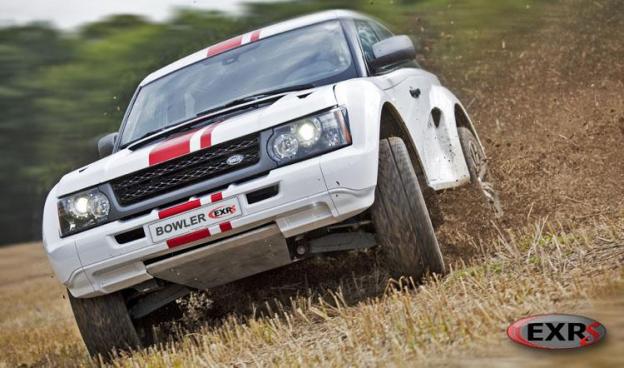 Land Rovers are known for their go-anywhere capability and British nobility-levels of luxury, but they are not too well known in the world of racing. Since 1985, Bowler Motorsport has been trying to change that. The company’s rally racers have always been based on Land Rovers; its newest model, the EXR S, is no different.

Looking at the EXR S, the headlights and grille from a Range Rover Sport are instantly recognizable, but the rest of the car is not. The EXR S sits on a much shorter wheelbase, making it easier to fling around corners. Vents and ducts were added to cool the brakes and dampers, and the wheel arches were widened. Underneath the truncated body is a hydro-formed chassis and a tubular roll cage made of high strength steel.

The EXR S definitely looks like a rally car, and it has plenty of power under the hood to back up those looks. Power comes from the Range Rover Sport’s 5.0-liter supercharged V8, which has been remapped to make 550 horsepower and 460 pound-feet of torque.

The engine is harnessed to a six-speed automatic transmission, which can be shifted manually via paddle shifters. Bowler says the EXR S will accelerate from 0-62 mph (0-100 kph) in 4.2 seconds, and keep going until it hits the electronic limiter at 155 mph.

Since the EXR S is a rally car, it needs some serious suspension. Bowler fitted it with fully independent suspension, which has 285 mm of travel. At the end of the suspension’s custom Bilstein dampers are massive 22” wheels.

The spec sheet may look pretty serious, but the EXR S is actually designed for road use. Unlike Bowler’s other rally cars, it gets convenience features like climate control, central locking, and optional heated leather seats. For owners that get bored while driving their 550 hp rally cars, there is also an entertainment system with iPod connectivity and Bluetooth.

The EXR S is a capable machine, and its price tag reflects that. The newest Bowler will go on sale in England after its Goodwood Festival of Speed debut for £155,000, or about $240,000.

Land Rovers are all about off-road prowess, and Bowler just makes them better (and faster). If this new partnership produces more cars like the EXR S, then it will definitely be a match made in Heaven.

How to turn off PIN on Windows?