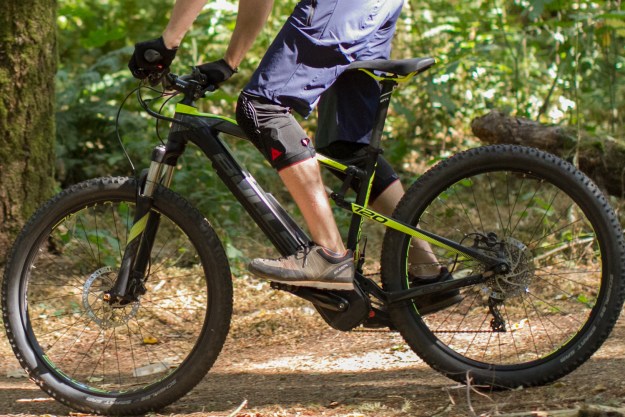 Mountain biking is surrounded by more machismo than a UFC title fight. Hitting the biggest gaps, down the steepest inclines, and barreling through the tightest berms are all ways to prove that you’ve got the guts to tackle the beast that is “the mountain.” But what if you don’t have anything to prove? What if want to trade machismo for fun? Then you might like the Bulls E-Stream EVO FS 2 27.5 Plus.

The E-Stream EVO FS 2 is a mountain e-bike of all trades. It has all the makings of a serious mountain bike with full suspension and lockout, 180mm hydraulic disc brakes, wide 27.5+ tires, and Shimano Deore shifters and derailleurs. However, the E-Stream EVO FS 2 makes a few compromises to keep the price down.

The fork on the E-Stream EVO FS 2 is an SR Suntour XCR-32 RLR Air 27.5, with a 15mm thru-axle and 120mm of travel. The air shocks mean less missing with maintenance, and the thru-axle allows for more positive feel on braking while stiffening up the front end for better agility. The rear shock is the SR Suntour Epicon-LO D, an air shock with 120mm of travel.

Both the front and rear have rebound adjustments and lockouts that are used to stiffen the frame. The lockouts are great when making your way up hills or pounding out paved miles. Locking the suspension keeps your pedal power going to straight to the ground instead of soaked up by the suspension, which helps preserve battery life and your legs.

The Suntour setup also spares your wallet some pain. The suspension travel is enough for most riding but could meet its limit on the most demanding trails. Still, the E-Stream EVO FS 2 handled my trail riding with ease. You’d have to push the bike very hard to overcome the suspension. You’ll want to look elsewhere if you’re hoping to compete in the X Games, but less serious riders are unlikely to encounter this bike’s limits.

You’re brought to a stop by 180mm Tektro hydraulic disc brakes on the front and rear. They feel confident in panicky moments. Good brakes aren’t worth a dime if they don’t have a quality set of tires to match. Thankfully, Bulls chose Schwalbe Smart Sams, which are not only capable in the dirt, but also mind their manners on the paved stuff. With meaty outer-edge lugs and a solid central rib, the Schwalbe Smart Sam is big enough to scramble through the loam but nimble enough to maneuver through trees.

Shimano’s Deore derailleurs and shifter set manage the gears. They do the job without complaint, but the real headliner is Shimano’s Shadow Plus clutch mechanism. This clutch stops the chain from flying wild during hard riding. It’s a great feature, though I would ideally like control over it, so I could turn it off when riding on pavement.

Putting the power down

Also worthy of praise is the 20-gear setup that’s made possible by the two main sprockets. Two main sprockets on an e-bike isn’t common, as most electric motors not being able to cope with the varying torque inputs. This bike’s Brose motor handles the variability beautifully, however, with smooth power output at every level. That’s not because it’s lacking for power, either. With 90Nm of torque on tap, this wolf in sheep’s clothing will have you wheelieing for days if you want.

That’s why it’s nice to be able to dial power back with eco, tour or sport modes. Sport was my obvious favorite for trudging up hills, but switching to Eco will get you close to the 137-mile claimed “optimal” range. In our time with the bike, through some moderate hill climbs, it was able to last a full day of riding with juice left to spare. On the technical side, we were able to squeeze 45 miles out of the battery, with the motor on the highest power setting, on flat pavement.

I did notice a slight metallic noise when pedaling on tarmac at approximately 18 miles per hour or higher. The sound only occurred at high speeds and was most likely caused by an overdue tune up on the well-worn demo we used for testing.

Though our E-Stream EVO FS 2 was a bit worse for wear, it still shined by showing off that it could take a beating. For example, its nicked display still worked without fault after being dropped. By minimizing the size of the display, Bulls lessened the likelihood of it getting broken in the event of a crash, which shows they were thinking about the long-term viability of the bike and not just how it would look in the showroom. The display is simple, showing only your speed and selected power setting, but it also makes provisions for additional devices with a micro USB port for GPS or phone charging.

The minimalist theme continues through the rest of the bike with a clean aesthetic and a tucked away battery. The matte black and hi-viz finish give the E-Stream EVO FS 2 a brutal beauty that turned heads everywhere we took it.

What wasn’t quite as sleek was the clunky nature of how the battery pulls out. Once unlocked, be sure to have your hand in place to catch the battery, because it will drop out of the bottom of the frame. Then there’s the interesting fact that if you leave the key in the lock you could easily shear it off, because the pedal gets in the way. These issues are avoided if you charge the battery while it’s still on the bike, which is easier anyway.

On the other hand, you’ll want to remove the battery if you need to haul this bike up a set of stairs. With an aluminum frame you’d expect lower weight, but at 55 pounds, the E-Stream EVO FS 2 has some heft.

The E-Stream EVO FS 2 is a jack-of-all-trades. Bulls made a few compromises to keep the price reasonable at $3,999. Still, this is an incredibly fun bike that tracks well, has a great motor, long lasting battery, and looks tough as nails.

There are certainly comparable e-bikes, like Giants Full E+ or the Specialized Turbo Levo FSR, but the 20 speeds on the E-Stream EVO FS 2 make it unique and worth consideration in the all-rounder category.

Bulls has gone to lengths to make the E-Stream EVO FS 2 as bulletproof as possible with its minimal display, tucked away battery, and padding for the electric motor. But the longevity of the E-Stream EVO FS 2 will depend on the conditions it’s ridden through, coupled with the regular bike maintenance you’d typically expect.

Yes. The Bull E-Stream EVO FS 2 27.5 Plus is as suited for roaming neighborhood as it is for conquering a trail.